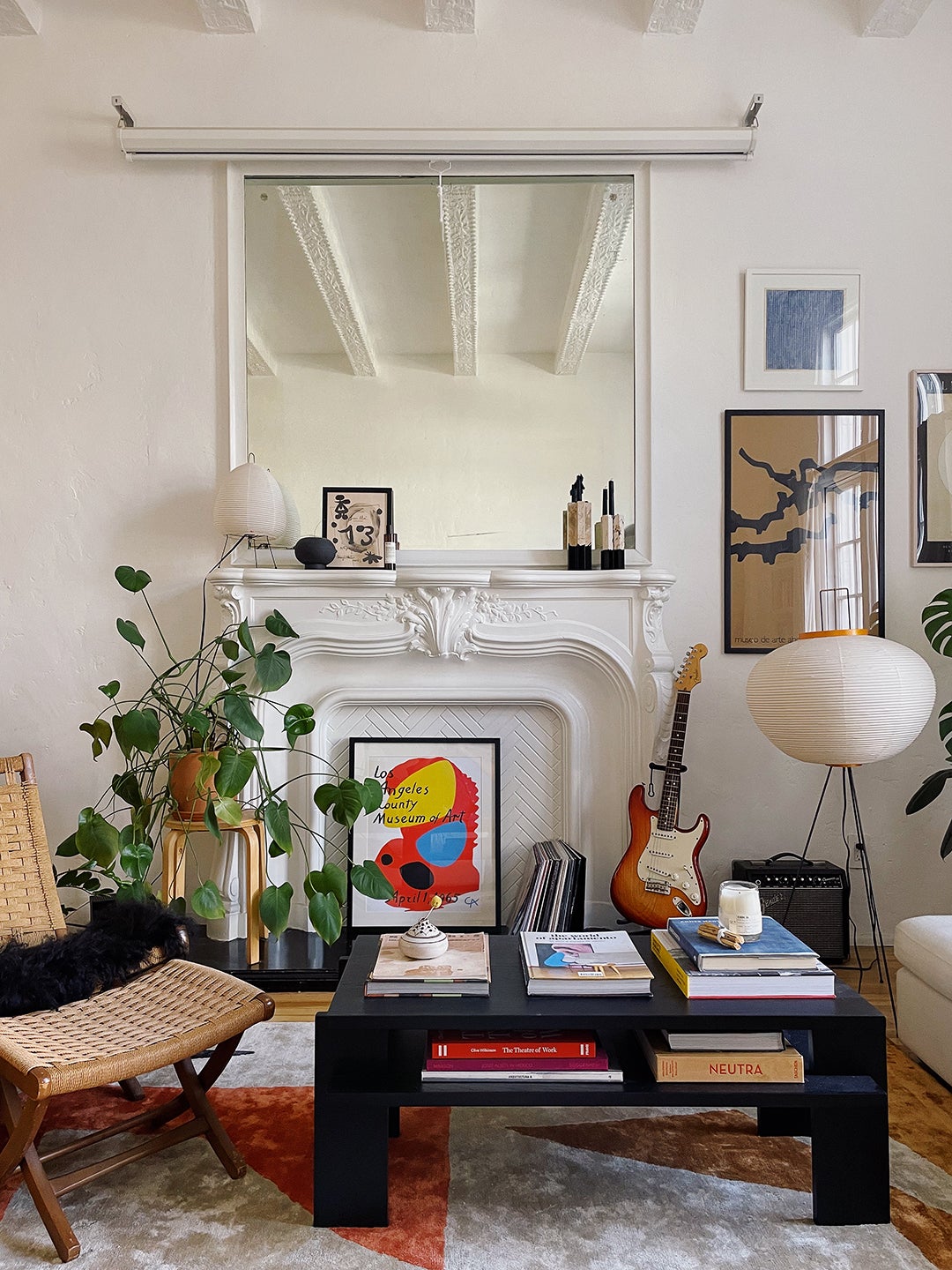 As a screenwriter (her partner is an architect), Alexandra Cadena is no stranger to the glitz and glam of Hollywood. In fact, it was the town’s allure that led her to their one-bedroom rental, designed by the same architect behind the iconic Sunset Tower, Leland Bryant. “Charlie Chaplin used to live down the street,” says Cadena of the Studio City neighborhood. “Even our upstairs hall closet was once used as a dressing room for actresses.” Such star-studded stories were real-estate catnip for Cadena, while her partner couldn’t take his eyes off of the original fireplace. “There was something for both of us, both of our worlds,” she remembers.

The kitchen in the 1930s unit came complete with arched alcove and checkerboard floors. “I show love to the room by using it and cooking as much as I can,” she explains. Cadena grew up in Venezuela, so whipping up an arepa or a local cup of coffee is a way to connect to her childhood. Four floating shelves bracketing the range hood ensure everyday essentials (like all-purpose flour and rice) remain close by. Due to a lack of cabinet space, across from the oven Cadena repurposed an arched nook into multipurpose storage—pots and pans hang on a small rack, and her lime green stand mixer sits on the counter. During the summer, the large window to the left creates a greenhouse effect. “It’s the hottest room in the apartment by far,” says Cadena. “The oven stays off during the month of July.” Then it’s colorful salads on repeat until the fall.

Down a small set of stairs, the living room’s ceilings soar to 12 feet, a detail accentuated even further by the all-white walls and beams. “It’s the best place to curl up and read,” says Cadena, which she does in the vintage woven lounge chair that she insists she’ll never give up—it was her first major furniture purchase. The console table behind the sofa, on the other hand, is brand-new. The couple needed a place to set down drinks and their respective to-read piles, and a superslim (and low-to-the-ground) console table fits the bill.

Cadena’s 9-to-5 revolves around the silver screen, so it’s rare that she gets home from work and wants to turn on a flick. “That’s why we keep the projector screen rolled up,” she says. “To encourage conversation.” On the off chance she’s in a streaming mood, however, the Amazon find simply unfurls over the large mirror above the fireplace. (The couple’s last movie night consisted of a Home Alone and Die Hard double feature at Christmas.)

Cadena wanted to let the space settle in her mind first, so she waited a year before making any other design changes. But now she can’t stop, swapping the circular coffee table for a longer black option—it coordinates with the black from her Cesca dining chairs—and adding more greenery whenever she can. “I let the plants add color for me,” she says, laughing. The latest arrival is a black rounded planter from Sanso, a local ceramics studio.

The upstairs has not been immune to updates either—Cadena recently painted the primary bedroom a cool sage green. “I needed the space to be a bit more soothing, less stark,” she explains. “But I still want to go darker.” Cadena loves a bit of drama, another thing that carries over from her day job. Rather than busy the walls with prints or artwork, she would prefer to let the sun streaks dance through the sheet curtains without interruption.

Although they just re-upped their lease, there are plenty of projects Cadena and her partner haven’t gotten around to tackling yet, like refreshing the run-down (but beloved) kitchen cabinets. But for now she’ll bide her time soaking up the L.A. sunshine from her front windows.