Despite only 10 days of rain a year, the garden is equally as vibrant. 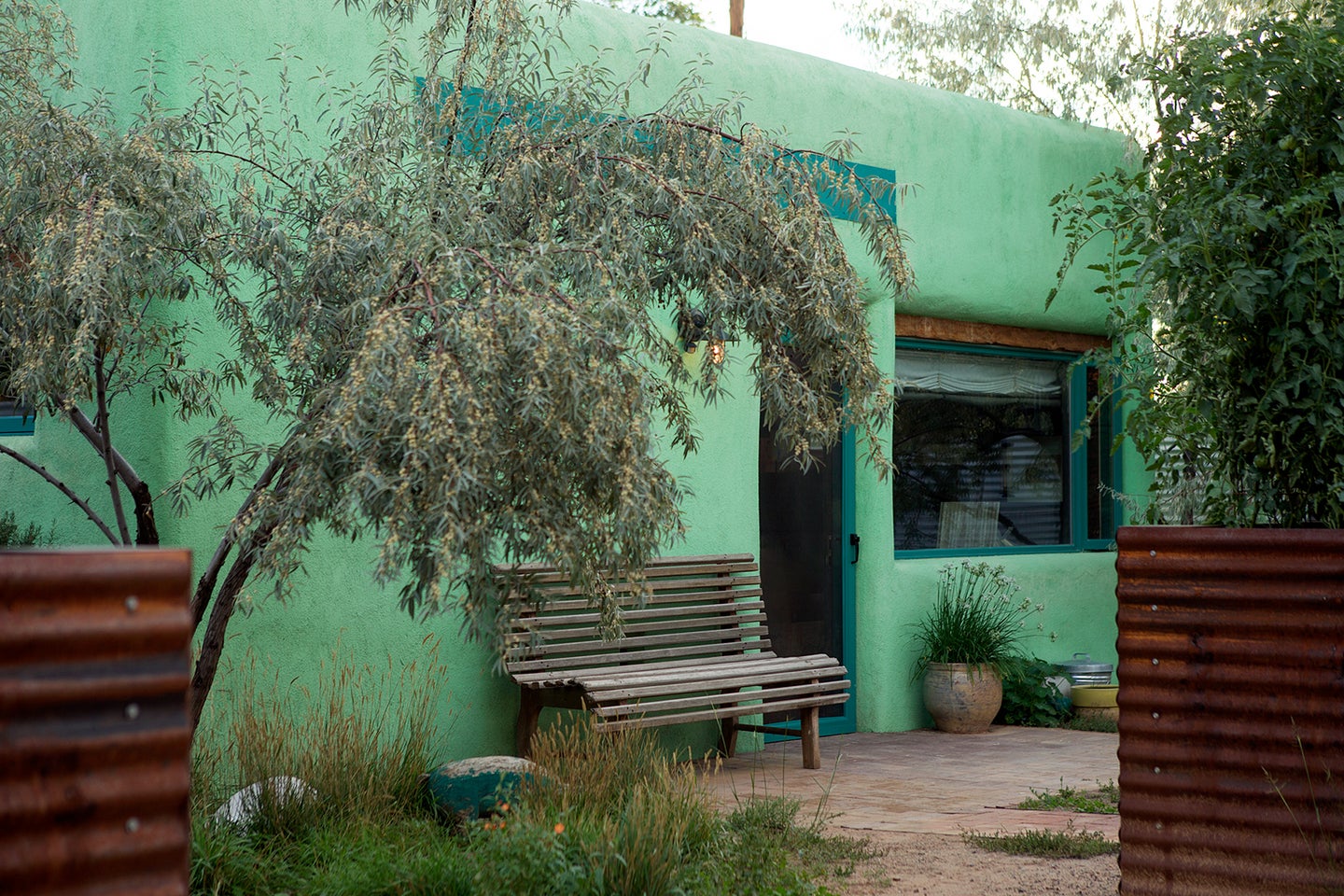 Would you stick with an outdoor renovation if you knew it was going to take 20 years? Heidi Steele did, and she has no regrets. “The plants themselves took nearly five years to get comfortable,” she admits. Steele’s town, outside of Santa Fe, New Mexico, is where the desert meets the mountains—the summers are 110 degrees, while the winters get down to minus-20. But between finding the exact right shade of yellow for her home’s exterior and installing a corrugated tin fence for her three-building compound, Steele was never sitting around waiting for the grass—er, cacti—to grow. Ahead, the founder of Surface Resources guides us through the lengthy landscaping process and shines a light on how she’s embraced the high desert’s heat.

The previous owner of the 1860s house had filled the yard with an abundance of English wildflowers as part of a misguided French country cottage theme. Each path was lined with varieties that definitely don’t handle the state’s lack of rainfall well, even with in-ground irrigation. By the time Steele moved in, every stalk was crispy. No matter—she wanted to use indigenous plants anyway, which not only weather the area’s climate mood swings with ease but blend in perfectly with the 1800s architecture. She had the underground watering removed (and all the original greenery razed) in favor of raised steel planters filled with local flora like pear cacti and tombstone roses.

Steele’s area gets less than 10 inches of water per year, meaning those drought-tolerant species thrive, while others would wilt almost immediately. “I’ve found that gardening is all about the amount of rain and days where the temperature stays above 65 degrees,” she says.

Because of the town’s nearly 700-year history—turquoise mining there can be traced back to the 1300s—Steele meets a lot of ghost hunters and paranormal activity fans in her neighborhood. “Due to that traffic, I tried to keep the build as historically accurate as possible,” she says. “Except for the paint, of course.” The tropical shades didn’t come from just anywhere—Steele looked to none other than a chicken statue (an old housewarming present from the ’90s) for inspiration. Specifically the bird’s yellow beak and verdant stand.

Not one to compromise on her creative vision, Steele quickly realized exterior paint wasn’t going to be vibrant enough on its own. So she added a coat of rubberized elastomeric paint (a flexible top coat to protect surfaces from weather) first to get the stucco to hold the bolder pigments. Repainting the houses every seven years or so keeps the sunshine yellow and jade green from fading too much (she’s already had to do it twice in the span of the project).

Like any newbie, Steele would take long walks around the small village to get familiar with the surroundings—and to investigate what materials other homeowners in the area had used. Upon stumbling upon an old, abandoned barn, she fell in love with the way its corrugated tin walls had aged over time and immediately ordered sheets to construct her property’s fence. Rather than keep the sheets vertical (the standard orientation), Steele turned every panel horizontal to maximize the shadow lines they create in the evenings. “I planted old electrical poles between each section so I could stagger them,” she explains. “The most magnificent thing about living in New Mexico is watching the light.”