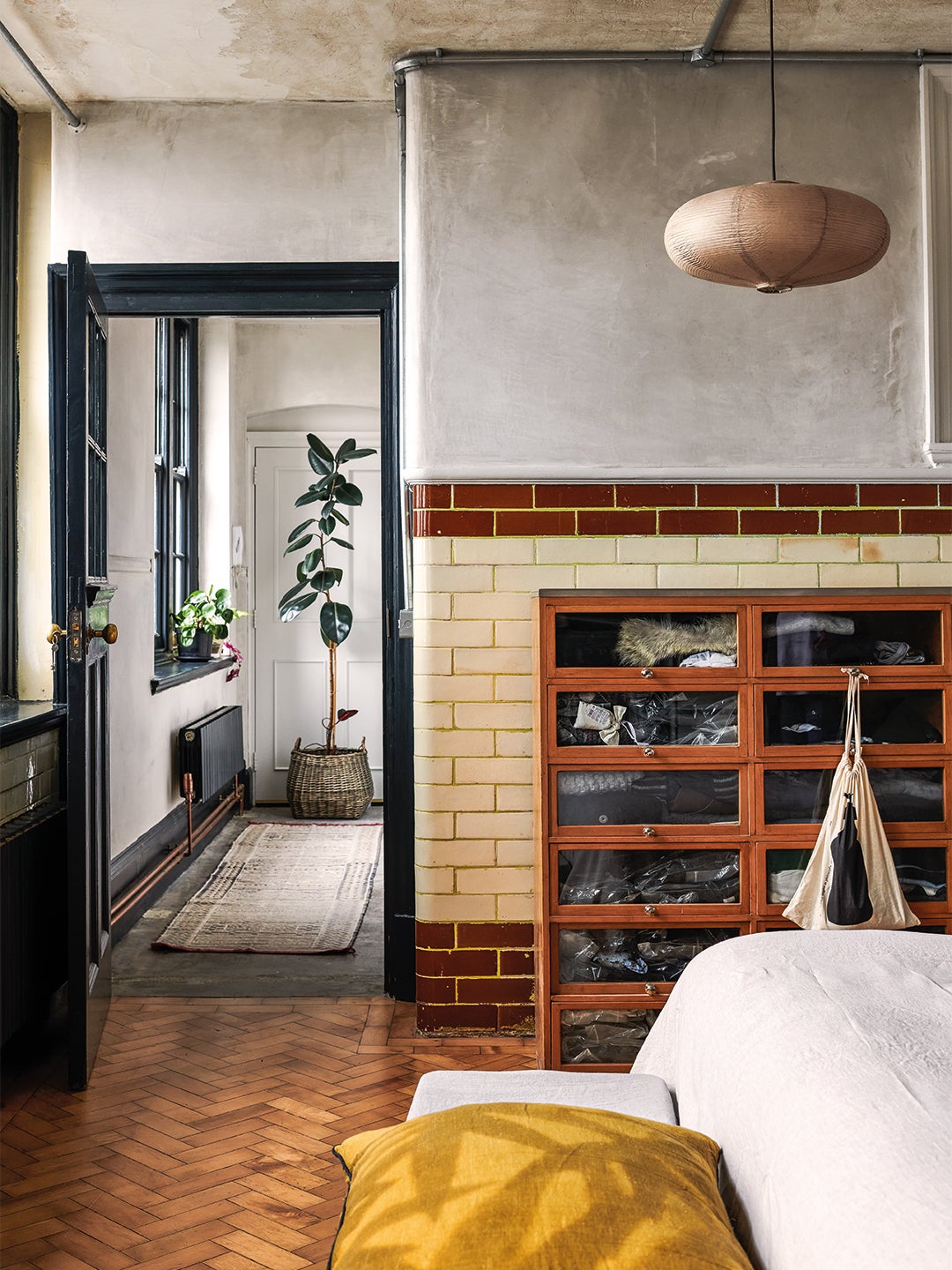 In the main bedroom, once the post ofﬁce staff room, bright green paint was scrubbed off to reveal the original tile. The parquet is also original. In the hallway, old radiators were painted black and copper pipes were left unpainted.

Rushing the decorating process mostly leads to impersonal panic buys and, with that, regret, returns, and more stuff in our landfills. As the pros advise time and time again, it’s best to decorate slowly. Meander your local flea market, scour eBay late into the night, keep your eyes open for garage sale signs. As British art director and designer Emily Henson argues in her new book, Create: Creativity Before Consumption, you’ll end up with both a truer reflection of who you are and a healthier planet.

“Consuming less and shopping more consciously may be a slower way of decorating, but it is thrilling when you succeed in achieving the look you love while often spending less in the process,” she writes. For the ultimate inspiration, look no further than Henson’s tour of a couple’s reimagined post office on England’s Kent coast, excerpted below.

Buying three floors of a 1910 post office and sorting depot in need of redevelopment was not what Karone Pack-Lum and Jon Agrippa had in mind when they decided to leave London and move to the Kent coast. They originally had their sights set on a big old brick house, but the sale fell through. When they heard about this property through word of mouth—it wasn’t even listed—they immediately recognized an exciting opportunity: good bones, a unique building, a great location, and a creative challenge.

Self-described die-hard Londoners, the couple previously lived in East London; Jon working in fashion and Karone in interiors. But they were tiring of city life and craved a more peaceful lifestyle that didn’t revolve around paying the mortgage. Their seaside life is a far cry from their fast-paced city days. Jon is now a personal trainer and Karone designs jewelry while taking on the occasional interior design project.

Once they’d found the property in this up-and-coming coastal town, they struggled to ﬁnd builders who could carry out work within their budget. The section of the sorting depot they bought hadn’t been developed like the rest of the building—in fact it was nothing but a shell. There was no electric, gas supply, or even stairs connecting the three ﬂoors. The lower level—now the main living area—had been a loading bay and had two huge openings in the walls, as big as the Crittall-style windows that now ﬁll that space. The upper ﬂoor, where the main bedroom now sits, was a warren of staff rooms and toilets, with a gaping hole in the ﬂoor where a chute dropped down to the basement level.

At ﬁrst sight the house looks luxe, and certainly money has been spent here. But much of the budget went into the structural changes necessary to convert the building from a mail sorting depot into a home. The couple moved in once the major structural changes were complete, but the decorative work is an ongoing process. Karone and Jon sought cost-effective ways of achieving the look they desired and worked with existing ﬁnishes and ﬂooring wherever possible. Many of the walls are ﬁnished with bare plaster, a look they love and that has the added bonus of saving on a hefty painting bill. The kitchen was built from moisture-resistant MDF and left unpainted, which was intended as a temporary cost-effective solution to tide them over until they build their “real” kitchen. However, they have grown to love it and may simply update it with a green marble work surface in the future.

Most of the lighting and furnishings are secondhand, bought at house clearances, on eBay, or from salvage yards. Even the luxurious bathtub was found on eBay, and many other items that look like pricey designer pieces were discovered through diligent searching. Karone claims that it is possible to get deals on almost everything if you’re willing to look around: “It is truly amazing the amount of stuff that is ripped out and thrown away.”

Five Minutes With Karone and Jon

Do you have a decorating/design philosophy?
We like to work with the space using a limited color palette, then adding texture.

What’s the most important thing for you at home?
Loving where you live is key.

Where do you shop for your home?
We like scouring online auctions, e.g., eBay, Facebook Marketplace, and also salvage and house clearances.

Describe one of your favorite creative solutions to a challenge you faced with your home.
The whole build was a creative solution. We had many people, such as the architect, builders, and numerous others, convinced that we could not achieve our goal on the budget we had—hey, what did they know!

Do you prefer to stay in one property for a long time, or do you like moving or even reinventing your home frequently?
We tend to stay put.

Is there something you haven’t done to your home yet and would like to?
There is deﬁnitely a list of both cosmetic and essential jobs that we are working our way through.