Art-Inspired Gifts for Everyone in Your Family

Head to the Whitney Museum for unique last-minute gifts. 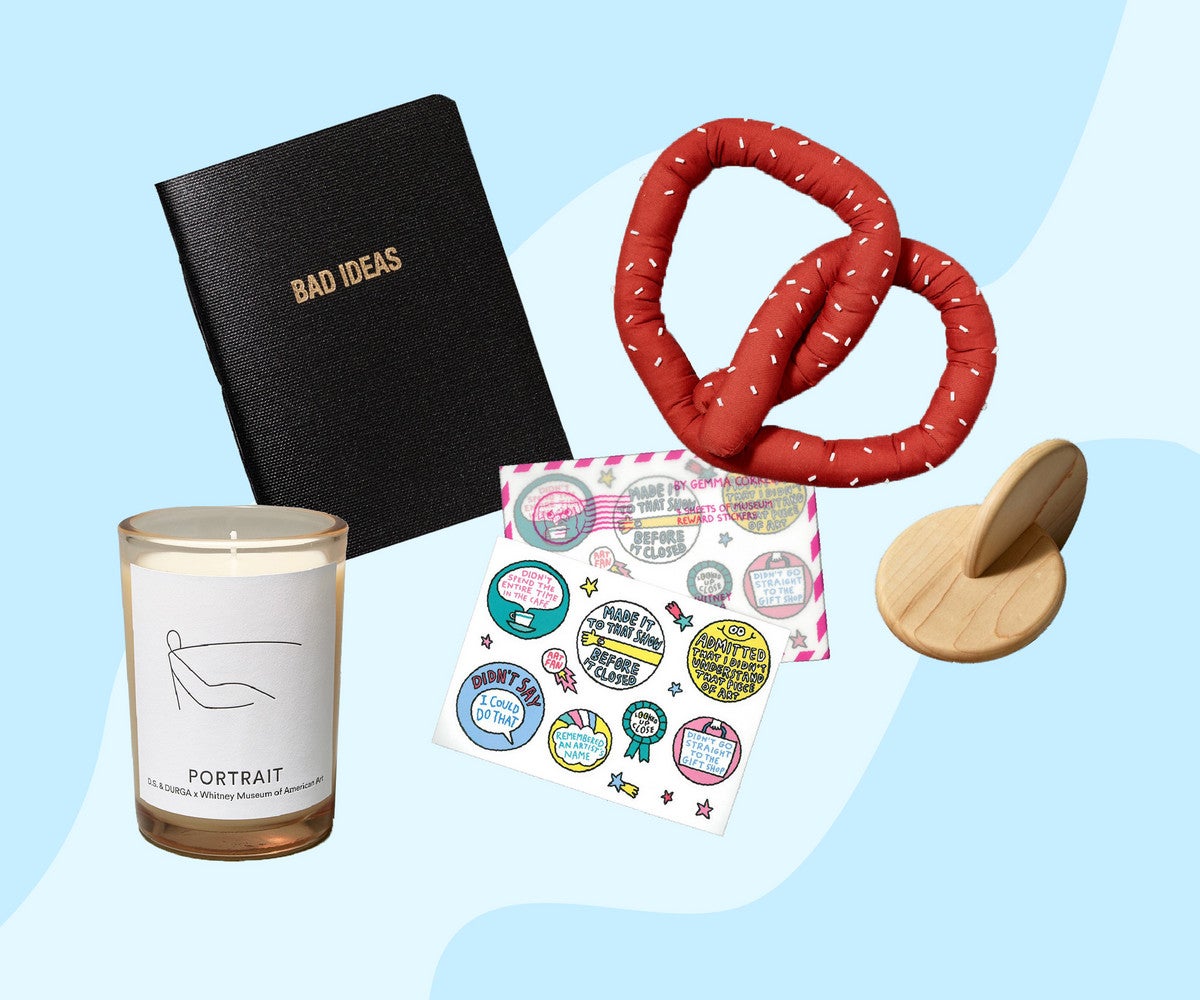 As the product development manager at the Whitney, Lauri Freedman is the brains behind the museum’s carefully curated shop. We sat down with the retail queen to get last-minute gifts for the gallery obsessives and could-be art lovers in your life. From amazing books to limited edition pieces of art, these gifts are surely worth Santa’s trip to this New York art institution.

With an emphasis on exclusive and inspired gifts you can’t find anywhere else, the

carries a wide range of jewelry, housewares, apparel, decor, stationery, and books that reflect and enhance the exhibitions on view and the Whitney’s collection comprised of over 23,000 works of art created by more than 3,000 American artists during the 20th and 21st centuries.

Gifts inspired by the Whitney

“Asking young designers to react to the pieces found in the Whitney’s collection or in a special exhibition is one of the most rewarding ways to create dynamic and unique objects,” says Freedman. “We wish we could say that this was our idea, but it stemmed from the number of young artists and designers who have come to us to share their excitement at the increased presence of works on view from the Whitney’s collection and what an inspiration in their own practices it has been.”

Created by cult favorite DS and Durga exclusively for the Whitney, the scent of this candle is inspired by the pioneering spirit of Gertrude Vanderbilt Whitney, founder of the Whitney Museum of American Art. Mrs. Whitney was an accomplished sculptor and a passionate advocate of living American Artists throughout the early 20th century. Her legacy lives on at 99 Gansevoort Street.

A follow up to her wildly successful PEOPLE I WANT TO PUNCH IN THE FACE, here’s a pocket sized place to catalog your BAD IDEAS.

What happens when a famously witty illustrator turns her gaze to visiting the Whitney? Gemma Correll’s Museum Reward Stickers!

Inspired by the museum’s location in the famed Meatpacking District.

Inspired by the kinetic nature of Alexander Calder’s work, this wooden oloid is a fascinating desk toy. An oloid is a shape created by putting two circles together at 90 degree angles. This creates a meandering object that self propels across a flat surface.

Gifts inspired by An Incomplete History of Protest, an extraordinary look at how artists from the 1940s to the present have confronted the political and social issues of their day.

New No’s is a poem by Badlands Unlimited written in 2016 as a declaration against the drift of American society toward what is most un-American. Part of the proceeds from sales will go towards Planned Parenthood and the ACLU. Designed by Badlands Unlimited and Paul Chan, this special edition poster is signed by Paul Chan and features an antifa “This ? Kills Fascists” stamp.

Untitled (Think/Flag) was WilliamCopley’s contribution to a portfolio released by Artists and Writers, Protest, Inc. to protest the War in Vietnam in 1967. This pack includes two square buttons, three small stickers, and three large stickers.

“Our book selection is a particular source of pride for us and is personally researched and selected by the director of retail for the museum,” says Freedman. “Far from being a side category for the Whitney Shop, books present the most significant percentage of our product assortment. We carry a selection of contemporary art books, an ever-changing and surprising selection of exhibition-related publications, books relating to the artists represented by our permanent collection and an outsized and  exploratory stock of monographs, theory, photography, performance, music, new media and front list titles.”

This exhibition catalog is unique both in its content—a rich trove of more than a thousand images, drawn from the artist’s personal archive and largely unpublished before now, including personal correspondence, journals, academic transcripts, handwritten notes, source material, exhibition announcements, clippings, and installation photographs—and in its cover—each of the run of 8,000 books is one-of-kind and hand screen printed in Laura Owen’s Studio.

An absolute bestseller, Paper Monument’s I Like Your Work: Art and Etiquette features contributions from 38 artists, critics, curators, and dealers on the sometimes serious and sometimes ridiculous topic of manners in the art world. Curators visit artists’ studios; collectors, dealers, and journalists assemble for a reception and reconvene later for dinner; everyone goes to parties. Paper Monument asked themselves: What is the place of etiquette in art? Since they didn’t have all the answers, they politely asked their friends for some help.

This beautifully written, deeply researched book is the first biography of America’s greatest twentieth-century sculptor, Alexander Calder. It is an authoritative and revelatory achievement, based on a wealth of letters and papers never before available, and written by Jed Perl, one of our most renowned art critics. A perfect read for the cozy weekends ahead.

Everyone loves a good cookbook. For Georgia O’Keeffe, food was elevated to an art form, not only in her works, but in its preparation and consumption. This book, including fifty of the artist’s favorite recipes, balances the fresh local and traditional ingredients O’Keeffe savored with the New Mexican landscape and culture that influenced both her art and sense of self.

In this comprehensive study of Johns later works, Fiona Donovan helps contextualize images that have personal significance for Johns.  Readers learn of his absorption with the appropriation and abstraction of images taken from Cézanne, Grünewald, Picasso, and others, and discover the inspiration Johns finds in his immediate surroundings.  Supported by the artist’s words and previous scholarship, Jasper Johns: Pictures within Pictures is the first comprehensive study of his later paintings and works on paper.

Taking wearable art to a whole new level—kids can snap and unsnap the included ribbons on this sweatshirt to create and re-create amazing designs exploring line and shape.

ALPHABET is unique in the world of children’s books as it features unadulterated reproductions of 33 panels that comprise a single work of art created by Laura Owens.  It is both a traditional ABC book and an artist’s book that offers a bold pop of matte color with spot varnish that perfectly catches the light on a coffee table.

A super fun recording device that allows even the youngest users to sample sounds and distort them using a thoughtful, intuitive interface.

Widely known for her sculptures deploying old couches and cast-off furniture as host bodies for plaster obelisks, papier-mache appendages, and homemade ceramic vessels, Jessica Jackson Hutchins created this candle holder in the form of a magical, mythological figure to commemorate the 2010 Biennial. Hutchins invites you to participate in the creation of these candlesticks. Included in this package are two candle holders and 10 multi-color drip candles. Once you engage on the process of creation, your pair will be truly unique and ever-changing. A magnificent object of which there are only five pairs that remain.

Resembling a cell phone and made of translucent amber resin, Telephone X, 2000 is one of Nam June Paik’s rare multiples. To create this piece, Paik inserted a battery-operated digital clock with liquid crystal display in the translucent resin body of the phone. Various electronic parts are still visible in the phone, including a circuit board, audiotape, and dials, as well as sundry metal objects, push pins and a handwritten message reading “Jaqu Lang becomes the president of France I will come out of grave. Paik 2000.”

Artist Ray Geary created this kit so he could collaborate and create a work of art together with you, the purchaser. His inspiration behind this one-of-a-kind artwork is one of the amazing women who influenced him. Some are named after women in his life, and others after women artists in the Whitney’s collection. In Ray’s own words, “I have been inspired by artists my entire life and hope this kit inspires you.”

There is one of these hand signed sets of crystal goblets created by Sol Lewitt prior to his death left for sale anywhere, and it’s here. We would hate to see it go, but we know it’s going to be snapped up this holiday season.