Why You Need to Visit Marfa, an Art Oasis in Texas 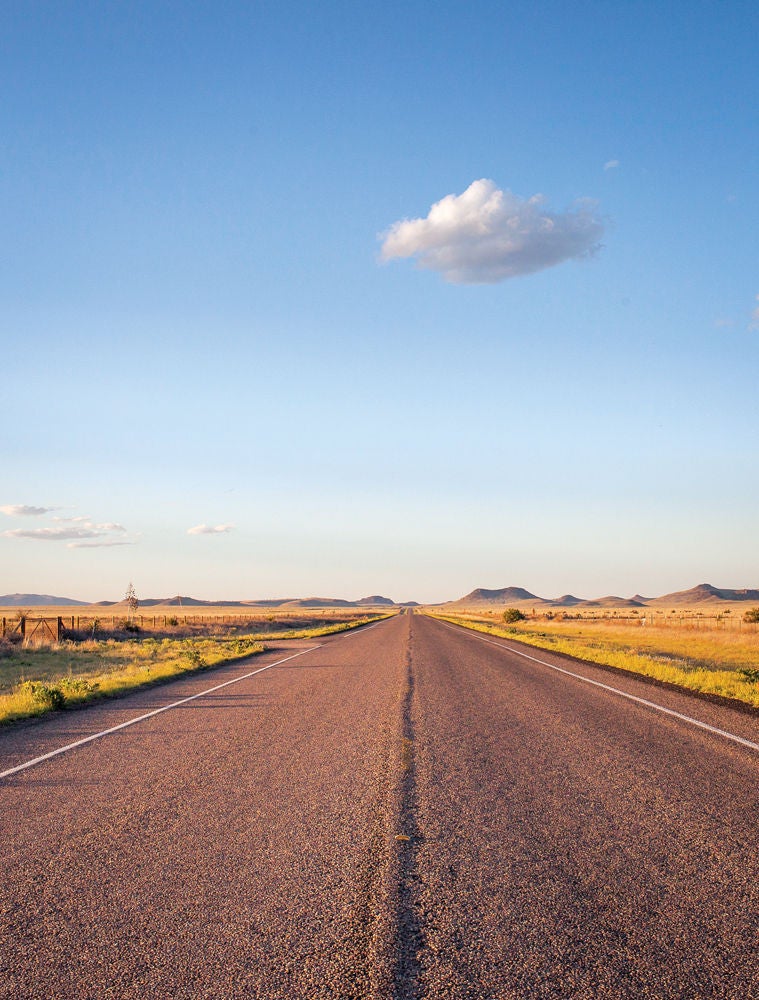 Marfa has been an art world darling for decades—largely thanks to Donald Judd, who moved to Marfa the 1970s—but its mythic status is a more recent development. After Judd died in 1994, the tiny town was dead. There were no funky boutique hotels or healthy food trucks. Storefronts that now hold galleries and design shops say empty. “Tumbleweeds the size of shopping carts blew down the wide streets—with no one even there to photograph them,” recalled two writers in a 2012 Vanity Fair story.

Things started to change in the early 2000s, and the last 15 years have been something of a renaissance for Marfa. New galleries began attracting well-heeled New Yorkers and Angelenos, and the Texas government decided to embrace the weird and otherworldy phenomena known as the Marfa Mystery Lights by building a roadside viewing center.

And now, the ever-photogenic, sculpture-filled landscape of Judd’s Chinati Foundation is pure Instagram bait for travelers who fuel their wanderlust on social media. Throw in a couple chic hotels, a quirky campground, some new age shops, and a visit from Beyonce, and it’s easy to understand why young creatives (hi, hello) are flocking to Marfa. Here, Domino curates the ultimate guide of where to say, shop, eat, and drink, plus all of the can’t-miss art.

Pro tip: Make a road trip of it. Start with the dramatic dunes of White Sands, New Mexico, and spend a night in El Paso for some killer Tex-Mex. Stop in Van Horn for lunch on the way to Marfa, and after a couple art-filled days, head to Big Bend National Park to get back to nature.

When it opened in 2016, Hotel Saint George filled a void in the Marfa hospitality scene, bringing with it the type of high-end, full-service accommodations that the town had been missing. Designed by Houston-based architecture firm Carlos Jiménez Studio, the hotel was built on the site of the original Hotel Saint George, which operated from 1886 to 1929. The modern, minimalist building incorporates elements repurposed from the old structure, like salvaged brick walls, reclaimed marble, and steel doors, and puts locally sourced decor and art at the center of the decor. In fact, the hotel holds nearly 300 works of art, which adorn the lobby and the 55 spacious guest rooms—the smallest rooms measure 450 square feet.

The horseshoe-shaped Thunderbird Hotel is the epitome of vintage chic. And with a newly renovated courtyard, a poolside lounge, and light-filled guest rooms abounding with work from local artists, the place also provides ample opportunity for leisure.

Situated in the center of town, this landmark hotel is known for its captivating architectural details and excellent customer service. Boasting an art gallery, a restaurant (Jett’s Grill), and a relaxing pool area, the Paisano is an Old World retreat in the midst of the tough Texas terrain.

Spread across 21 acres, El Cosmico is a hotel/campground that provides ideal accommodations for anyone craving the unconventional. The establishment prides itself on its laissez-faire vibe and nomadic sensibility. Guests stay in vintage trailers or Sioux-style teepees, and may revel in the pleasures of wood-fired hot tubs, a communal reading room, and a hammock grove.

This sprawling contemporary art museum was founded by Donald Judd in 1979. Located on 340 acres of glorious desert land, the Chinati Foundation features dozens of Judd’s sculptures on permanent installation, as well as works from the likes of John Chamberlain, Dan Flavin, and Richard Long. Take time to walk the grounds and see each of Judd’s 15 concrete works, a series of rectangular boxes placed along a 1 kilometer-long axis on the edge of the property. Installed over a four-year period, they were among the first pieces placed at the site.

For nearly 20 years, the Judd Foundation has maintained the private residences and studios of iconic artist Donald Judd. Visitors can take guided tours of these spaces to explore the artist’s life, work, and legacy.

Giving a nod to Marfa’s flourishing cultural scene, the Oklahoma Contemporary Arts Center chose this Texas mecca as the site of its first satellite gallery. Exhibitions are free, and frequently include works by such luminaries as Chuck Webster and Gonzalo Lebrija.

A must-see for collectors and admirers, this gallery is a leading venue for works by local artists but has, in its day, exhibited works by such well-known names as Andy Warhol and Thomas Hart Benton.

No trip to the desert is complete without a little bit of the weird and otherworldly. In Marfa, this comes in the form of mysterious glowing orbs that appear on the horizon in an area about nine miles east of town, in a part of the desert that’s nearly uninhabited. The lights can be red, blue, or white, and they appear randomly throughout the night, or sometimes not at all. They’ve mystified locals, astronomers, and meteorologists for decades.

If you’re lucky, you’ll find yourself standing next to a local at the viewing center, who will be more than happy to indulge curious tourists and answer your questions. Even if you’re not interested in the paranormal, the viewing center is an ideal spot for stargazing.

This cultural arts space is devoted to exploring a range of mediums by artists from across the globe. Featuring exhibitions and performances by the likes of Sam Falls and Steve Earle, the onetime 1920s dance hall offers a fresh assortment of the latest in international film, music, and visual art.

Housed in a private home-turned-gallery space, Exhibitions 2d showcases works by an enviable roster of up-and-coming artists. With its rooms filled with everything from handmade furniture to minimalist drawings, the gallery offers a lively blend of high art and sculptural furnishings.

Dishing up traditional Southern fare, this swank eatery has been a popular favorite for the past five years. Complete with a private casita, ample outdoor seating, and a vegetable garden that provides fresh produce for salads and sides, Cochineal gives Marfa a whole new level of green cuisine.

Grab a sandwich or salad at this tiny Swiss-inspired cafe across from the Presidio County Courthouse and enjoy it in the leafy courtyard. They also have an extensive specialty drink list, with fresh fruit smoothies, old-school creamsicle sodas, and caffeinated pick-me-ups.

It didn’t take long for the buzzy lobby bar of Hotel Saint George to become the place to grab a drink in Marfa. It’s easily the trendiest bar in town, but still manages to maintain an unpretentious, relaxed atmosphere—the $5 happy hour margaritas and live music certainly help.

Stop by this Mediterranean-themed food truck, conveniently parked in the center of town, for a scrumptious midday meal. We can’t stop raving about the crispy “Marfalafel” wrap or the flavorful fattoush salad.

Nestled inside the historic Hotel Paisano, Jett’s Grill is a laid-back restaurant with hearty cuisine. It serves up artisanal libations next to a cozy fireplace—you’ll come for the jalapeño fried sirloin but stay for the intimate atmosphere and best outdoor patio in all of Marfa.

Located in the lobby of Hotel Saint George, Marfa Book Co. sells a curated selection of homewares, beauty products, paper goods, art, and kids products made by local Texas designers, as well as a knockout selection of design books. They also host regular readings and artist talks, so be sure to check the schedule while you’re in town.

This adorable lifestyle shop features a thoughtful sampling of both local crafts and global gems. With unique finds like hand-braided camera straps and Himalayan salt crystal lamps, you’re sure to score something special.

With its sprightly blend of vintage and modern furniture—some of which has been revamped with new paint and upholstery—as well as artisanally made textiles and accessories, this boutique is a soulfully curated delight.

No trip to Texas is complete without a stop at an authentic boot retailer. This endearing store and workshop uses old-school grain leather techniques—just like the cowboy boot cobblers used in the good ol’ days—to handcraft its own collection of stylish, versatile, and durable footwear.

Since its installation in 2005, Prada Marfa has become a cultural landmark. Created by Michael Elmgreen and Ingar Dragset, the permanent sculpture looks like a Prada store plopped down in the middle of nowhere. But there’s no door—it’s a time capsule filled with shoes and bags from Prada’s 2005 season—and it’s not maintained, so eventually it will become a ruin. Today, it’s also a can’t miss photo op; the Instagram location has nearly 25,000 shots.

As you’re driving down US-90, you’ll start to notice a spot in the sky. Is it a plane? A bird? A drone? Any amount of neck-craning won’t help. Part of the fun is not knowing what it is, but if you’re not one for surprises, it’s a giant Zeppelin-shaped white balloon equipped with a Tethered Aerostat Radar System and used by U.S. Customs and Border Protection to patrol the border.

This story was originally published September 8, 2015. It has been updated with new information.

What to Eat, See, and Do in London, According to an Insider These Are 2018’s Most Popular Travel Destinations The Only Guide You Need to Mexico City