Everything You’ve Ever Wanted to Know About Vintage Jewelry

Jewelry designer and vintage gem expert Erica Weiner tells us what's trending, when to splurge, and how to care for our treasures. 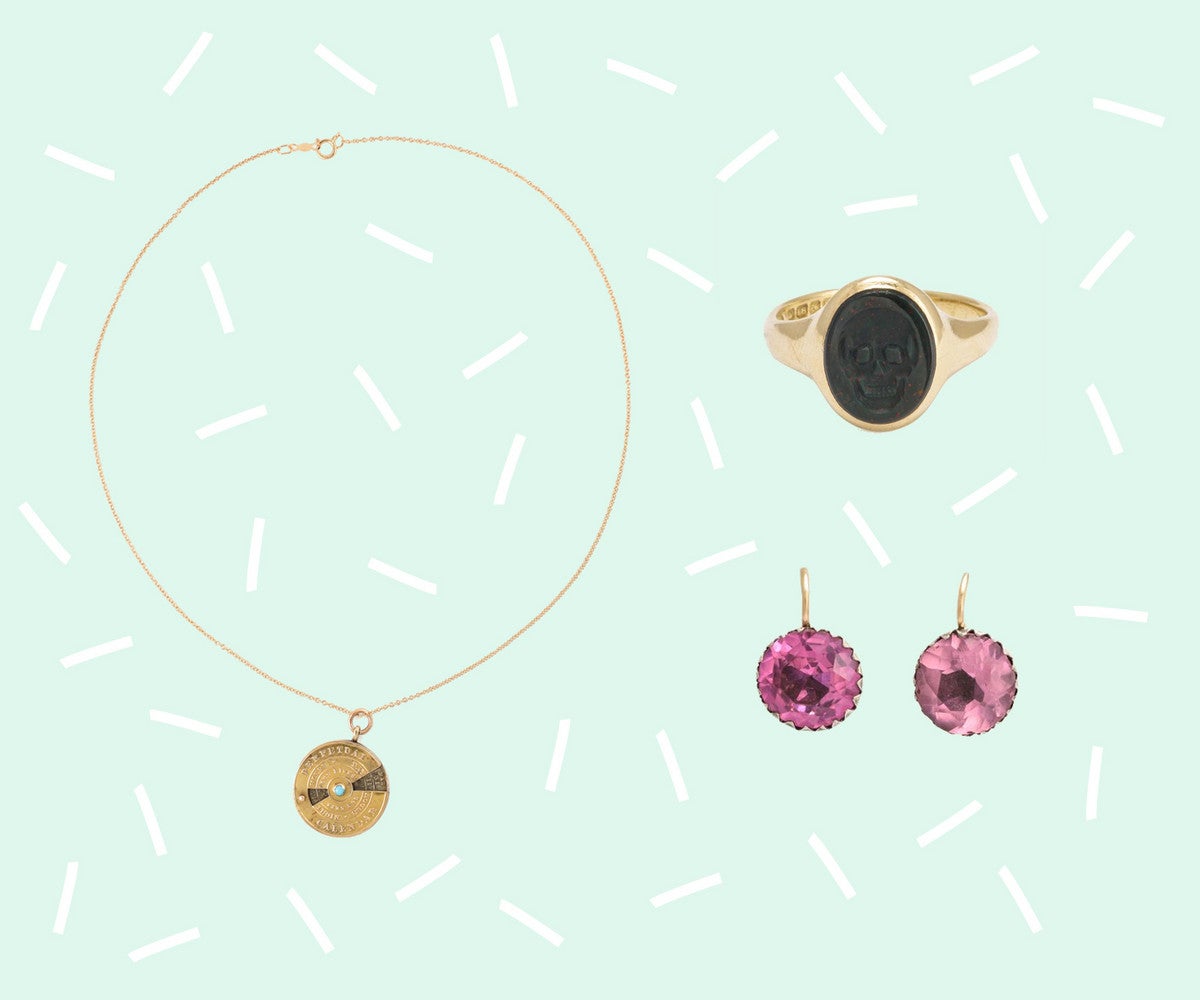 Vintage jewels, whether passed down through your family or picked up at a flea market, have an undeniable staying power, but where do you begin? How to know what’s real or how to care for it or when to splurge?

One of the experts in this field is Erica Weiner, a New York City-based jewelry designer and vintage exert. Weiner owns an eponymous shop with two outposts—in Manhattan’s Nolita and Brooklyn’s Boerum Hill—and together with her business partner Lindsay Salmon, they travel the world searching for special treasures.

They sat down to give us the 411 on vintage jewelry 101: everything from care, to pricing, and how to tell when you’ve got a gem—or just a Cracker Box trinket.

When is a vintage piece worth the splurge?

Erica Weiner: An antique piece (and this goes for shoes, clothes, jewelry, etc.) is worth the splurge when you see it and know that it’s meant to be yours. Both Lindsay and I have been known to fall in love with a piece of jewelry that’s WAY overpriced, but we buy it for ourselves anyway, and then enjoy it forever. Jewelry buying can be very emotionally based, and value is often invented by the buyer.

What we find to be invaluable is a trusted antique jewelry repair person on hand. That means you can get great deals on pieces that are dinged up, missing stones, or are a huge/teeny ring size—all of these things are often fixable. There are exceptions to this: For example, don’t buy a mourning ring with braided hair and think you can re-size it. Heating the metal during resizing will burn that hair to a crisp and ruin the whole piece.

If it speaks to you, if it feels special, if it is just the thing you’ve been looking for, then it’s worth the splurge. The value is not just in the material sum of its parts, much of it is to do with the artistry with which it was made and the history behind it. Berlin Iron is a good example of this; it’s only lacquered iron, but very little of it has survived into the present day, and it was made in the early to mid 19th century to fund the Prussian defense against the Napoleon’s army.

Tell us about the most interesting engagement rings you’ve ever seen.

The coolest  engagement ring one I’ve ever seen is the one Napoleon gave to Empress Josephine. It’s a pear-shaped diamond alongside a pear-shaped sapphire in what we call a “toi and moi” setting. I always get a thrill when the jewel has belonged to someone, and I can research that someone. I tend to not get too worked up about plain diamonds, even if they’re huge or “perfect.” Some of the ancient Egyptian jewelry in the Metropolitan Museum, though – that gets me going.

At this point I’ve seen so many that it’s hard to think of one that really stands out. However, the coolest ring I’ve never seen is Queen Victoria’s engagement ring. It was a snake ring set with emerald and in my imagination, it is the most beautiful ring in the world. There aren’t any pictures of it, and it isn’t in the crown jewels because she was buried in it.

What about men’s antique wedding bands?

: Men’s antique wedding bands aren’t a huge trend that I can see right now, but maybe that’s because we don’t get many of them in the shops. I think maybe many men’s bands have been melted down for scrap gold over the years, or people keep them in families. Maybe people are buried wearing them or we don’t have a reliable source to buy them?  I just don’t see a ton on the market right now.  Plain classic yellow gold bands are definitely popular. These are timeless and have looked essentially the same for many generations.

WW2-era two-tone diamond engagement rings. They’re elegantly designed and feature diamonds that are modestly sized, and therefore people are drawn to them. They’re affordable, sturdy, and have this wartime romance story built in.   Sapphire cluster rings are a trend, too. We sell lots from the late 1800s to early 1900s, with a central sapphire surrounded by diamonds—so classy.

Solitaires are always popular. People often go with simpler styles when they think they are going to be wearing it forever.

What are you each personally drawn to right now?

I love snake imagery and symbolism, and I collect serpent jewelry. Any combination of snakes, black enamel, and old-cut diamonds? You have my attention. Here’s a great one: It’s a fine quality memento mori skull pendant from the mid-18th century. The realistically modeled skull is carved from coral, with a gold and rose-cut diamond serpent entwined around it, symbolizing death and eternity.

I’m also on the hunt for a pair of 18th century poissarde earrings for myself.  These are incredible.  Not 100 percet certain if this is true, but Poissarde earrings are supposedly named for the fishwives (poissarde in French) who wore them in the Les Halles market in Paris. Or maybe it’s because the ear wires look like fishhooks…

I collect mourning jewelry, so I’m always on the lookout for rare and unusual memorial pieces. Lately I’ve been really into milk tooth jewelry, which varies enormously in style. The tie that binds is that these pieces always feature baby teeth set like jewels. They are really hard to find.

What is the most interesting or unusual piece or trend you’ve ever encountered?

EW: Right now, I’m into neoclassical jewelry, and more particularly I’m drawn to souvenir Lava jewelry made for the Grand Tour. Carved out of lava in Italy, it was essentially borne from people’s obsession with the newly uncovered ruins of Pompeii. We have a really unusual set of Lava earrings that represent the Cane Corso, an ancient Italian dog breed.

Do you take any steps to sage or protect the vintage pieces owned by others?

EW: We sometimes do sage the jewelry cases; One quick pass can’t hurt! We can’t claim to really know the juju that comes with jewelry, but some karma is certainly ghosting around. It’s up to you how much you feel those vibes.

The mourning jewelry, especially the pieces with human hair, is just so intimately connected to grieving and the human body. Those jewels are powerful. Lindsay personally owns an 18th century mourning ring that I tried on once and felt like a full-body energetic weird feeling. I’ve studied reiki, and it was the most powerful kind of reiki I’ve ever felt, and this is from an object, not a human. It wasn’t spooky, and I feel ridiculous saying this, but the image of a young girl came into my mind.

The girl memorialized in that particular ring was 13 when she died, maybe her vision was real?! I don’t think it’s bad karma to wear antique jewelry at all. I think it’s romantic to wear something that was treasured by some person, or two, or three, or more people, in the distant past.

How do you care for vintage jewels?

EW: Totally depends on the jewels. If it’s from the Georgian era, usually foil-backed gems are involved, and you must not get these pieces wet. Diamonds or other colored gems were set on top of metal foil to give a more shiny effect, and if you get water between the foil and the stone, the whole thing could darken and tarnish and that sucks. You have to remember to take Georgian-era rings off every time you wash your hands. Every. Time.

Where do you source most of your jewelry?

EW: We have long-standing relationships with antique jewelry dealers, mostly in the United Kingdom, and we travel overseas often on buying trips. England is a hotbed for antique jewelry. England was so wealthy during the 1800s; the empire was at the height of its power, and the middle classes rose during this time. This meant that lots and lots of people were able to commission or buy jewelry, not just the most elite classes. But the richest people did own jewelry, of course, and it’s the best of the best. Much of it is still circulating throughout the UK.

How do you define antique vs. vintage?

LS: Technically, it had to be at least 100 years old to be antique. Vintage is a little looser. I see things from the 1990s being sold as vintage, so I guess we could say 25 years.

What inspired your gorgeous 1909 collection?

EW: I say that it was inspired by my paternal grandmother, Mollie, who grew up on the Lower East Side of Manhattan, but it’s more complicated than that. Mollie was an entrepreneur, a history enthusiast, and a hustler. That inspires me. Antique jewelry is also a huge inspiration to the 1909 collection.