a novogratz-designed hotel that’s MUST see

timber cover gets a novogratz-approved revamp that will inspire your next plane ticket. 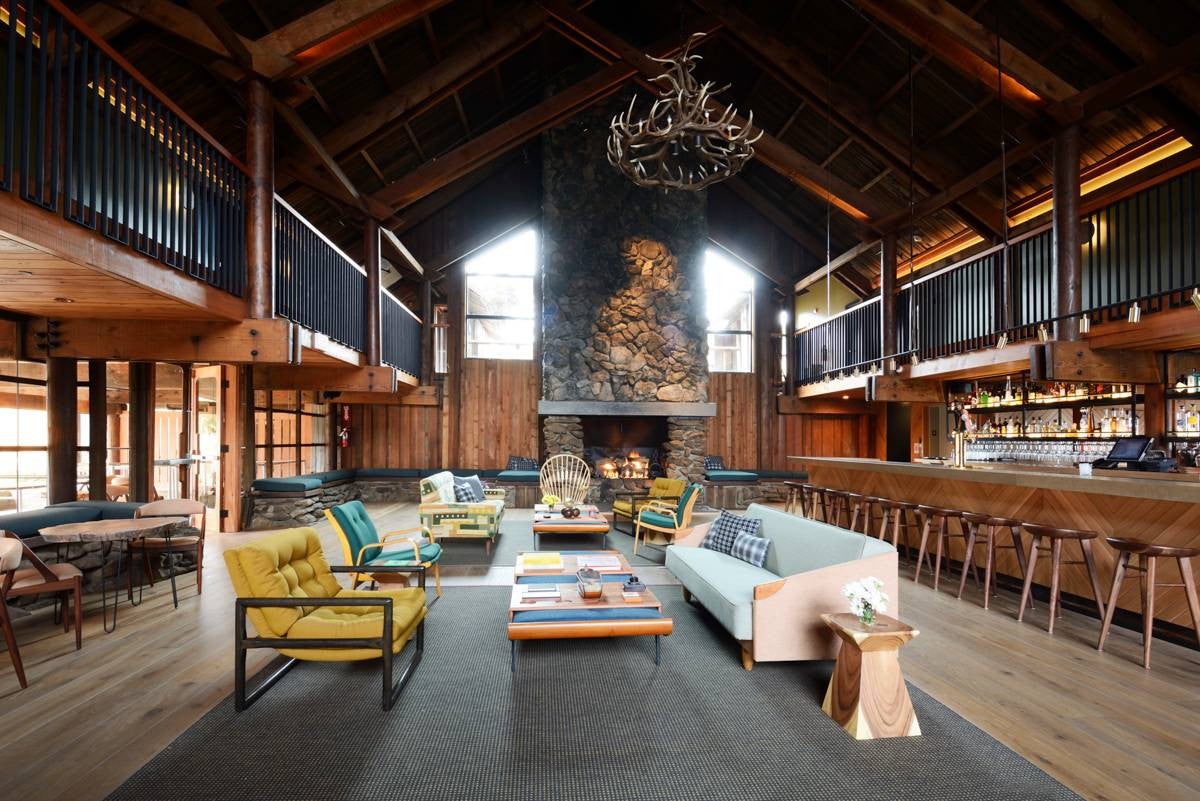 are often favorite projects for designers. “They are a designer’s dream,” confirmed Robert Novogratz, one half of the Los Angeles-based interior and product design duo, The Novogratz, that partners Robert with his wife, Cortney. Timber Cove, the Novogratz’ fifth boutique hotel project, sits on 23 acres of rugged California coast about two hours north of San Francisco. Independent owners Michael Barry and Jens Von Gierke worked closely with the Novogratzes to reimagine the interiors to perfectly harmonize with the 196O’s Frank Lloyd Wright-inspired A-Frame exteriors and stay true to Lloyd Wright’s ethos of bringing the outside in while updating the amenities for modern sensibilities.

, including eight newly constructed suites, were redesigned and updated and a restaurant, Coast Kitchen, complete with micro-seasonal menu and a Sonoma heavy wine list, was added to the property. After a seven month renovation, the hotel reopened on August 2, 2016.

in the hotel caters to the “modern hippie,” with heavy use of redwood and stone features repurposed from the hotel’s original design. Furnishings feature modern and retro pieces, with 1920s décor, tribal textiles, colorful fabrics, worn leather and preppy plaids to complement the intimate spaces. Every room serves as an oasis to unplug and take in the surroundings, and features one-of-a-kind layouts.

Before and After images help to truly grasp the scale of the changes made by the Novogratz and inspire your own remodel project. All questions answered by Robert Novogratz

LET’S TALK FIRST ABOUT HOW YOU APPROACHED THE OVERALL PROJECT. WHAT DREW YOU TO THIS PROJECT? Boutique hotels are a designer’s dream. So many people see your work and there are always interesting details to uncover. The setting of Timber Cove is spectacular, perhaps the most spectacular of any hotel we’ve ever done. The drive on the Pacific Coast Highway to reach the property is like a James Bond commercial or a scene from Alfred Hitchcock’s “The Birds.”

WHAT WAS THE FIRST THING YOU NOTICED ABOUT THE PROPERTY? The main rooms are incredible. But they hadn’t been updated in 40 years. We wanted to bring the architecture back to life and make the living spaces more fun and comfortable and add a few pops of color. Living within great architecture is a little different.

HOW WOULD YOU DESCRIBE THE OVERALL DESIGN OF THE PROJECT? We wanted to keep the minimal feel of the structural elements while adding more color and whimsy to the guest rooms and suites. We took a few more risks with the design elements of the guest rooms.

THE RESORT WAS BUILT IN 1963 AND INSPIRED BY THE WORK OF FRANK LLOYD WRIGHT, WHO WAS PERHAPS BEST KNOWN FOR BRINGING THE OUTSIDE INSIDE. HOW WERE YOU ABLE TO ACHIEVE THIS WITH THE INTERIORS? We kept Lloyd Wright’s ethos in mind one hundred percent of the time. We wanted to honor the entire area and update the property more so than change it. No matter what you do, it is undeniable that the star of the show at Timber Cove is the ocean.

LET’S WALK THROUGH THE GREAT ROOM. WHAT WAS THE SPACE LIKE BEFORE AND HOW DID YOU AND CORTNEY APPROACH THE CHALLENGE OF MODERNIZING THE SPACE WHILE STAYING TRUE TO THE FRANK LLOYD WRIGHT-INSPIRED ARCHITECTURE? When a beautiful design is right there in front of you, you do not need to change everything but look instead for ways to give the space a facelift.

The region is known for redwood and there was plenty of exposed wood in all of the rooms. In the Great Room, the first thing we did was have the woods cleaned. We took out the carpeting and brought in a lighter wood floor. The floor is made of white oak with a natural, clear varnish which adds a subtle brightness and warmth. We did almost nothing to the stone fireplace except to pressure-wash it. Then we changed the seating around the fireplace to include benches. Benches help inspire a spirit of community.

Since the property is mid-century designed, we thought the furniture should match that time. We stuck with that timeframe and used muted colors to bring in some fun. Most of the lighting we added is a bit more modern and subtle and many of the new lamps are more circular. That is, except for the antler chandelier which worked perfectly and reminds guests of the history of Timber Cove as a lodge. The space itself is really the star of the room and we did not want to have too much going on. But, as a main hotel space, the room needed to be transitional so items could be moved around to suit the needs of the hotel for any given day, whether for a wedding party, corporate event, or a small family gathering.

Note that there is no TV in there but instead, lots of design books and fun games. It really is a welcome area for guests where everyone can hang out.

DID YOU MAKE ANY CHANGES TO THE RESTAURANT? The dining room was very cold and dark. It had a very commercial feel to it. They had another amazing stone wall already in place in the dining room. We wanted modern, classic design that complemented the wood and stone but did not overpower it. We got the fireplace made locally from copper. We’ve always loved the look of copper and it worked perfectly in the surroundings.

WHAT CHANGES WERE NEEDED IN THE GUEST ROOMS? HOW DID YOU CONCEPT THE NEW GUEST SUITES? At Timber Cove, the rooms were each a little bit different from one another so our first task was to look for ways to standardize the room experience to make each guest room feel like a Timber Cove experience. We looked first at the walls. The rooms had almost too much wood but here, but it made sense to use the wood as a natural headboard. And once the wood in each room was cleaned, it was spectacular. We then had bed frames – with no headboard – custom made in Brooklyn. The rope accent along the frame adds a nautical touch that references back to the nearby ocean. Like we did in the Great Room, we balanced the redwood walls by adding a white oak floor. Then we looked at ways to add color and comfort. The wall art has a very mid-century look, and though it is new, it feels like it could have been there forever. The natural log nightstands were made locally. We really wanted comfortable chairs that were good for leaning back and reading or savoring the view with a cup of coffee or tea.

In the suites, we added some custom touches that gave the rooms even more of a boutique vibe. Since we already had the concept of the natural log nightstands, we mimicked that with the natural slab counters. Black SMEG refrigerators were a natural choice for us as they have more of a boutique vibe. The black Rais and Wittus stove played a huge part in the design as they are a source of warmth for guests. We’re known for using color, but in this particular space, we wanted to use muted colors and let the environment speak for itself. We used the neutral hues of the landscape as a jumping off point, adding color in muted blues and greens and reds. The colors on the awesome 1950’s totem pole were perfect accent colors.

WHAT NEEDED TO BE DONE IN THE GUEST ROOM BATHROOMS? The bathrooms were all different. Some of the bathrooms were actually in the guest rooms. Guests at boutique hotels now expect more of a spa-like experience. And the bathroom is a very functional room. It has to be durable. We wanted neutral colors and lights to help the space feel as presentable as possible. Black and white are more modern so we stayed with that palate. And we updated the light fixtures to be more sleek.