10 north pole-esque towns to visit during the winter holidays

the holiday spirit is just around every corner at these wonderfully picturesque winter wonderlands. 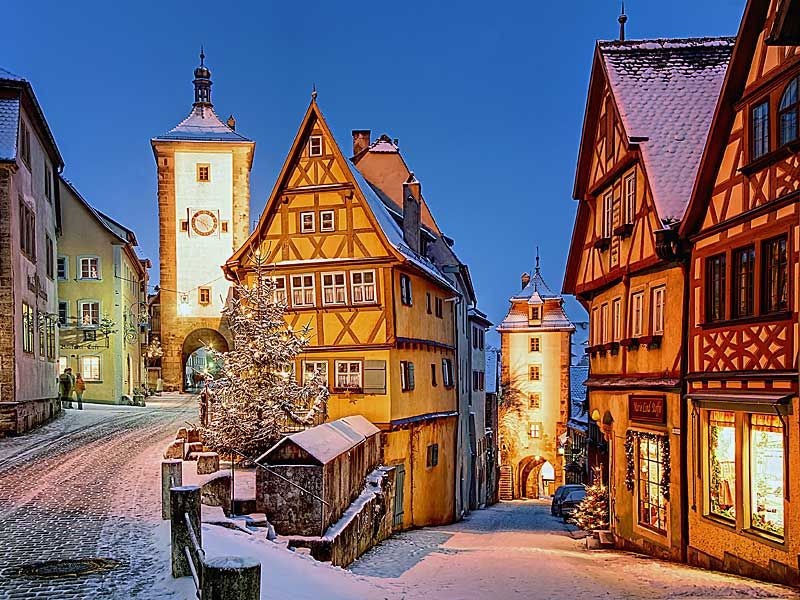 Why not start at the Arctic Circle? The Arctic Circle cuts right through the famous “Santa Claus Town” in Rovaniemi City in the Lapland region of Finland. Their post office can take care of any letter you may want to post to Santa! Saariselkä Village is one the country’s most famous destinations for skiing and hiking and, of course, spas. It’s also the area in Lapland where you need to be if you want to experience the Aurora Borealis—the magical northern lights are visible in this area 200 days a year. Resorts in the area offer unique experiences (glass igloos!) specifically designed to be able to fall asleep under the the lights.

Ever heard of Wassail? It’s a warm, apple cider-like drink that perfectly embodies this town’s holiday spirit. For the past 25 years, Woodstock has hosted a pre-Christmas festival called Wassail Weekend, complete with horse-drawn carriage rides, a parade, and tours of the town’s historic sites. During December, the local shops stay open late for those on holiday gift shopping missions.

Filzmoos is a small town in the Salzburg region of Austria. It is best known as a winter destination for skiing but it has also become quite famous for hot air ballooning! Imagine soaring above the snow covered houses below, the sky around you dotted with colorful balloons. Then land and experience the town from the ground driving around in a horse-drawn sleigh ride or wandering around the stalls at the Christmas market in the town square.

Salzburg is perhaps one of Europe’s most beautiful cities and this is especially true during the holiday season. While it is a region that is renowned for winter sport activities, the lights, the christmas markets, and festive atmosphere of this bustling city makes is a perfect holiday destination. The city hosts several historic Christmas markets, of course.

There are Christmas markets all over the world now, but they are known to have originated in the German-speaking regions of Europe. So, it follows that Germany would have some of the best and oldest Christmas markets. These are quite often held in a town center, next to a towering old cathedral, tying the festivities to their Holy Roman Empire origins. The medieval city of Cologne is best known for the Cathedral (and beer halls!). But come the holiday season, the city decks the halls with markets all around town where artisans create and sell their wares. Winter games like ice skating lanes are set up close by and traditional foods and Glühwein (aka mulled wine) scent the wintry air.

Located along the so-called “Romantic Road” (after the Romans, not romance. Hmph.) this medieval, walled city is not only steeped in history but it is also known as the Christmas capital of Germany. It goes without saying that this deeply traditional town hosts a magnificent Christmas market (and has done so for over 500 years). And it’s also home to the world’s only Christmas Museum. There’s also a Doll and Toy Museum, because that just makes sense. It’s about two hours away from Neuschwanstein Castle, which is what the Cinderella Castle was modeled after. No wonder people “complain” this town is so well preserved and over-the-top picturesque that it reminds them of Disneyland. Except, of course, this is the real deal.

One of the oldest and quite simply most beautiful cities in Eastern Europe, Prague is a pleasure to visit any time of the year. But during the winter season, the city magically glows and twinkles. Of course, there are Christmas markets galore, dotted around in the city centers. These markets are famous for selling traditional holiday ornaments, Czech linen, cookies, and other local delicacies.

Another picturesque, medieval town that is delightful year-round, but is truly magical in the winter months. No wonder it was designated a World Heritage Site by UNESCO (and paradise by chocolate lovers the world-over!). Bruges is the capital of the Flemish region of Belgium and is famous for its gorgeous architecture and setting. The town is very walkable, but if you’d like a break from being on foot, you could take a boat down the canal and see this historic place that way. Or, in true winter wonderland fashion, strap on some skates and have fun at the giant ice rink in the middle of town.

It’s hard to believe that a town like Colmar still exists today. It looks like it belongs in a book of fairy tales with its colorful, half-timbered houses and slightly sloping roofs. In the winter, the town is lit by colorful lights and the windows are decorated with lights and garlands. And if that weren’t enough, this jewel of a place is smack dab in the middle of the Alsace, a region of France renowned for its wine culture and cuisine.

For some, the idea of a winter wonderland may not involve picturesque post-card towns or holiday festivities. It may, instead, involve snow-bound activities on skis, snowmobiles, or snow shoes. For those intrepid individuals, there’s snow bunnies destination favorite: Jackson Hole, Wyoming. Located near the Grand Teton National Park, this region of the country is known and beloved for its breathtaking wilderness and wildlife. In fact, the area offers various “winter safari” opportunities, including a sleigh ride through the National Elk Refuge. After all, what winter wonderland would be complete without a sleigh ride?