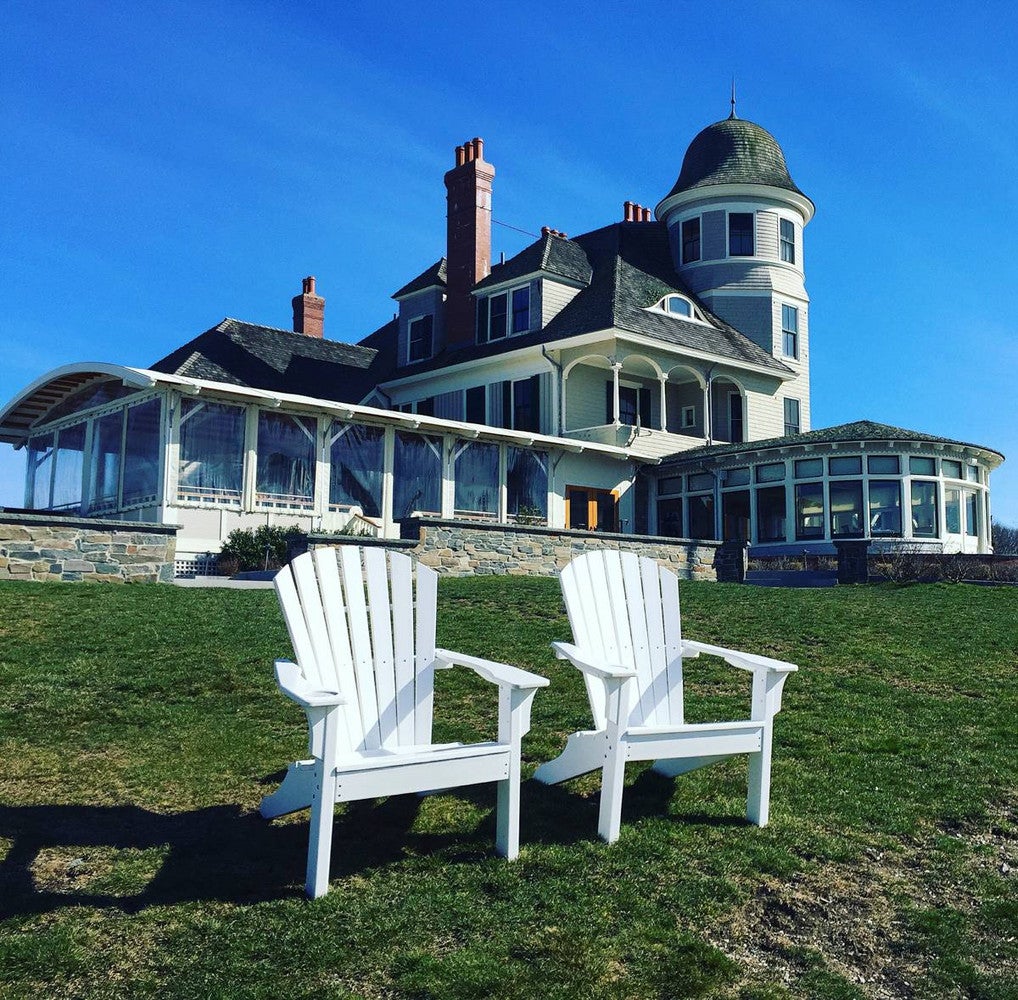 Once a storied summertime hot spot for society’s most social, the tiny seaside city of Newport is filled with Gilded Age history, sweeping ocean views, and loads of charm. Located between New York and Boston, it’s a quick road trip from either city, but also easily accessible by train or boat. (With all due respect to Amtrak though, train < yacht.) Whether you can stay awhile or only have a few days to spare, plan a visit to ogle over-the-top mansions, dine on fresh seafood, and sip rosé by the water.

If you’re driving up from the south, plan a pitstop in New Haven for pizza!

The Vanderbilt Grace Channel a little Gilded Age glamour with a stay in this historic mansion. Situated in prime position for exploring Newport, the stately red brick building was originally built by a Vanderbilt in 1909. While it’s been completely restored with a fresh look (and so many amenities!), the hotel maintains a charming vintage vibe. Rooms are airy and bright, with high ceilings and big windows, and there’s a billiards room, library, garden terrace (eat breakfast here) and both indoor and outdoor pools — all spaces we imagine were popular haunts at the turn of the century, minus any stuffiness. There’s also an amazing roof deck, so in the evenings order a cocktail and snag a front row seat for the sunset.

Toast the start of your getaway with a glass of sparkling wine at check in!

The Mansions Perhaps the most iconic attraction in Newport, these Gilded Age summer homes offer an inside look into the lifestyles of the uber-wealthy. Of all the palatial mansions, The Breakers is the most so, but if you have time add Marble House, The Elms, and Rosecliff (the ballroom here features in the Robert Redford version of The Great Gatsby) to your list. During the week your entry ticket comes with a 1 hour guided tour, while on the weekends you can explore the opulent Great Hall, the servant’s kitchen larger than most NYC apartments, and some of the other 70 (!!) rooms on your own.

Check out that matching wallpaper and headboard.

Cliff Walk This ridiculously picturesque path, winding for 3.5 miles along the eastern coast of Newport, is officially a National Recreation Trail. With an ocean view on one side and an up-close look at enormous mansions on the other, this is a must-do on your visit.

More than half of the path is easily walkable, but some of it, with rugged trail and steep cliffs, requires more focus. If you’re looking for a short, relaxing walk, start at Forty Steps and head south for about a half mile, until you hit Ochre Point. (You’ll know you’ve hit it when you see the tasteful 125,000 square foot mansion that goes by the name of The Breakers.)

Park on Narragansett Avenue to see Forty Steps and embark on the Cliff Walk.

Forty Steps Located at the end of Narragansett Avenue, Forty Steps was originally built in the early 1880s and was a social gathering spot for servants from the mansions. Rebuilt in the late 20th century, the stone steps lead down to the water, with a landing for taking in the Atlantic Ocean and rocky cliffs. The brave climb down and jump right into the water there — it’s a prime spot for swimming and fishing.

Rosemary + Thyme Cafe Arrive early to this tiny cafe — the only qualm people seem to have here is that their incredibly delicious sandwiches, salads, and baked treats sell out too soon. Admittedly, we stopped in more than once for giant lemon and raspberry muffins and the densest, most buttery bacon, egg, and cheese croissants. They also make solid coffee — try the “Terminator” with a shot of Rhode Island’s famous coffee syrup.

Get here before 11am for these muffins!

Corner Cafe Nestled between the police station and town hall, this bustling breakfast spot (also open for lunch and dinner) is packed with locals, but don’t be daunted, they have the friendliest service around. Offerings include egg scramblers, breakfast burritos, and plenty of sweet dishes, including Wootens French toast, made with Portuguese sweet bread and served with homemade maple pecan butter. To hell with your clean eating, smother that stuff on every last centimeter of the plate.

The Lawn at Castle Hill Inn On a breezy, sunny day, there’s no place else in Newport (or perhaps the country) I’d rather be. The lawn of this elegant inn doubles as an al fresco drinking and dining retreat. Settle into an adirondack chair (they’re first come, first served,) order a plate of oysters and a glass of bubbles and watch the boats on Narragansett Bay glide by.

The clam chowder is really good here, too!

The White Horse Tavern Originally a Colonial-era pub that dates back to 1673, it’s currently one of the oldest taverns in the country. Come to check out the historic digs, and stay for local craft beer on tap and updated takes on classic dishes like duck Scotch eggs, beef wellington with foie gras, and lobster mac and cheese.

Newport Vineyards The vineyard, just a few miles north of town, is home to a ton of activities, including the live music and a localFarmer’s Market. On Saturday mornings, come to shop the stands of organic veggies, fruit, and flowers, fresh eggs, and lots of prepared foods (everything they sell is local – grown or made within a 50 mile radius) and stay for a tour of the grounds and sample the wines in the tasting room or on the patio that overlooks the vineyards.

Redwood Library & Athenaeum Founded in 1747 (that’s pre-Declaration of Independence, people!) this is the oldest lending library in the country. The $10 admission fee includes a tour, which takes place at 10:30am Monday to Saturday. Check the schedule for special events like Shakespeare readings and art exhibits, including the currently running Newport Designs: The Art of Architecture, Landscape and Planning, featuring past and present examples from around the city.

Pick up a pamphlet at the circulation desk for a self-guided tour if you miss it the scheduled one.

Adirondack II Sail Sure, you could opt to book a day or sunset sail aboard this 80 foot schooner, but a better bet is to choose between the Morning Mimosas, Sails & Ales, or Dark & Stormy Sail (happening in the morning, afternoon, and early evening, respectively.) Cruise over Narragansett Bay, drink in hand, and get an altogether different, breezier view of the mansions from aboard this stately vessel.

The Dark & Stormy, made with dark rum and ginger beer, is a classic sailor’s cocktail.