Tips and tricks from the “king of pasta". 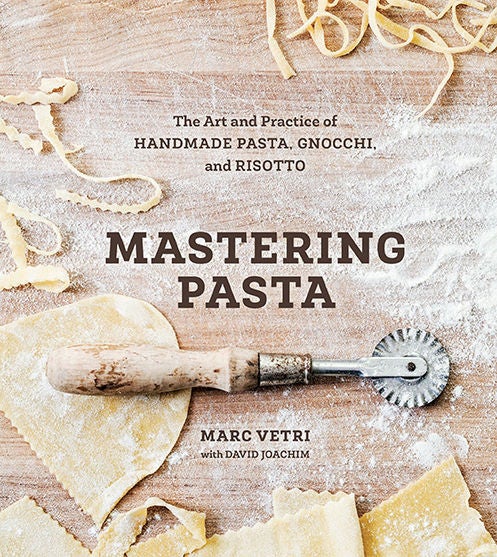 The key to mastering the art of homemade pasta.

He’s lauded by many as the “king of pasta” renowned for homemade pasta recipes that have put him on the culinary map. Despite that reputation, there is nothing showy about Marc Vetri; on the contrary, he is down to earth in his cooking style and presentation.

For this reason, a pasta tutorial in the cozy kitchen of Culver City’s Bucato was the perfect venue to be introduced to Vetri’s latest cookbook, “Mastering Pasta” (Penguin Random House). It was a rare treat to see this Philadelphia restaurateur in the wilds of Los Angeles. He spends the majority of his time in his native Philly- churning out meals at the Vetri Family of restaurants- Vetri, Amis, and Lo Spiedo.

According to Vetri – flour is the most undervalued element of homemade pasta. “There are layers of flavor in pasta that we don’t tend to think about,” he says. “Once you’re able to understand the flour – the strength and the protein in it- you’re able to manipulate it.”

With a homemade tagliatelle in mind, Vetri takes several whole eggs, four types of flour, a few more yolks (sans whites), olive oil, and water to make a fresh pasta on the spot.

“I don’t even measure things out anymore. I just sorta roll with it,” says Vetri, as he begins to pour a variety of flours onto the butcher block.

For a mixer, he uses his index finger, swirling the yolks round and round until the mixture begins to solidify. Then it’s time for kneading. This is a process that Vetri describes as therapeutic and “requiring full upper body action”. If you’re kneading pasta dough passively, you’re doing it wrong.

He is insistent about the importance of understanding the protein compounds in pasta. “Mastering Pasta” walks the reader through the differences between flours and the role eggs and olive oil play in homemade pasta. The recipes are easy to understand and properly detailed- he removes the guesswork.

Like a confidently cool artist, he cuts the pasta into perfectly eyeballed ribbons before moving to the stovetop to prepare a mouth-watering mushroom sauce. Morels, onions, olive oil, water and butter- once again, the ingredients are so simple, but the outcome is beyond divine.