bracketology 101: how to fill out your march madness bracket, like a total pro

March Madness (aka the NCAA Men’s College Basketball Tournament) starts this week, and we’re here to make sure that you can...er, productively waste time along with your colleagues. 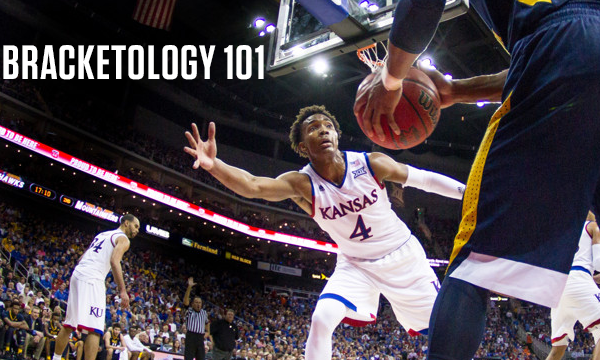 March Madness (aka the NCAA Men’s College Basketball Tournament) starts this week, which means employees will be filling out brackets and getting distracted during the work day to the tune of billions of dollars worth of lower productivity. Fortunately, we’re here to make sure that you can…er, productively waste time along with your colleagues.

How The Tournament Works

The top 64 teams in the country face off in a single-elimination tournament. Win a game and you advance, lose and your season’s over, and you go back to campus and homework (read: beer pong) again. There are four ‘regions’ with teams therein “seeded” #1 (best) through #16 (get the bus home ready) in each region. The reward for having a good season is an easy start to the tournament, so each #1 seed starts by playing each #16; the #2 plays the #15, and so on.

(ProTip: No #16 has ever beaten a #1.) The games take place over three weeks, with pauses after every two rounds so that in theory the student-athletes can extremely hypothetically attend classes they’ve been missing while on national TV. The winner of each region advances to the Final Four.

Be a Bracket Ninja

One great thing about filling out a tournament bracket is that it takes five minutes, makes otherwise inane games suddenly interesting, and people who watch zero college basketball often do better than diehard fans. You can imagine how much fun it will be when you trounce that friend or coworker who thinks he knows his stuff. In fact, if you simply pick the favored team in every game, you’ll beat most of your friends while they craftily yet stupidly try to predict upsets.

– Go to the TipOff-exclusive tournament page – Create a CBS Sports login – Use the Pool Password: WatercoolerWords – Click your bracket, then fill it out by clicking who you think will win each game, all the way through the finals – Make sure to do this all by 11 AM ET Thursday — after that, the brackets lock, and you’ll miss your chance for no-downside bragging rights. – Sit back, relax, and wait to win your extremely official TIPOFF TROPHY… provided you win the pool (which you will, right? Cuz you’re you).

How To Fill Out Your Bracket

Every March, “experts” appear out of nowhere and call themselves “bracketologists.” Don’t listen to them: you’re better off taking stock market advice from Jim Cramer (he’s so bad as to be statistically improbable) than putting your faith in the TV talking heads spouting tournament tips. The tourney is extremely unpredictable, and with 9.2 bajillion — sorry, “quintillion” — possible tournament outcomes, anyone confident that their bracket is even close to fully correct is either insane, from the future, or on television.

But here are some tips:

A lower seed indicates a better team, and going with the favorite is generally the safer bet. But correctly calling upsets is more exciting, and you only need to get one to start bragging. If you’re flying blind, don’t choose an upset of the #1 seeds too early. In our bracket, picking the team that wins a Final Four game is worth much more than correctly picking a first round game, so you’ll want some of your picks to still be around late in the tourney. Don’t stress about it. Most of your friends will be impressed that you even did a bracket this year at all.

This year, way more than most, there’s no clear favorite. But for starters, look at the #1 seeds: Kansas, North Carolina, Virginia, and — for the first time ever — Oregon.

Here are a couple of first round upsets we at TipOff might stick in our own brackets: #11 Gonzaga over #6 Seton Hall and #10 VCU over #7 Oregon St. Don’t say we didn’t warn you.

“I know any given bracket has a one in 9 quintillion chance of being perfect, but, I don’t know, I’ve got a good feeling about this.”

To make sure you always stay in the game, subscribe to TipOff Sports at www.tipoff.co.