Including a green-stained floor. 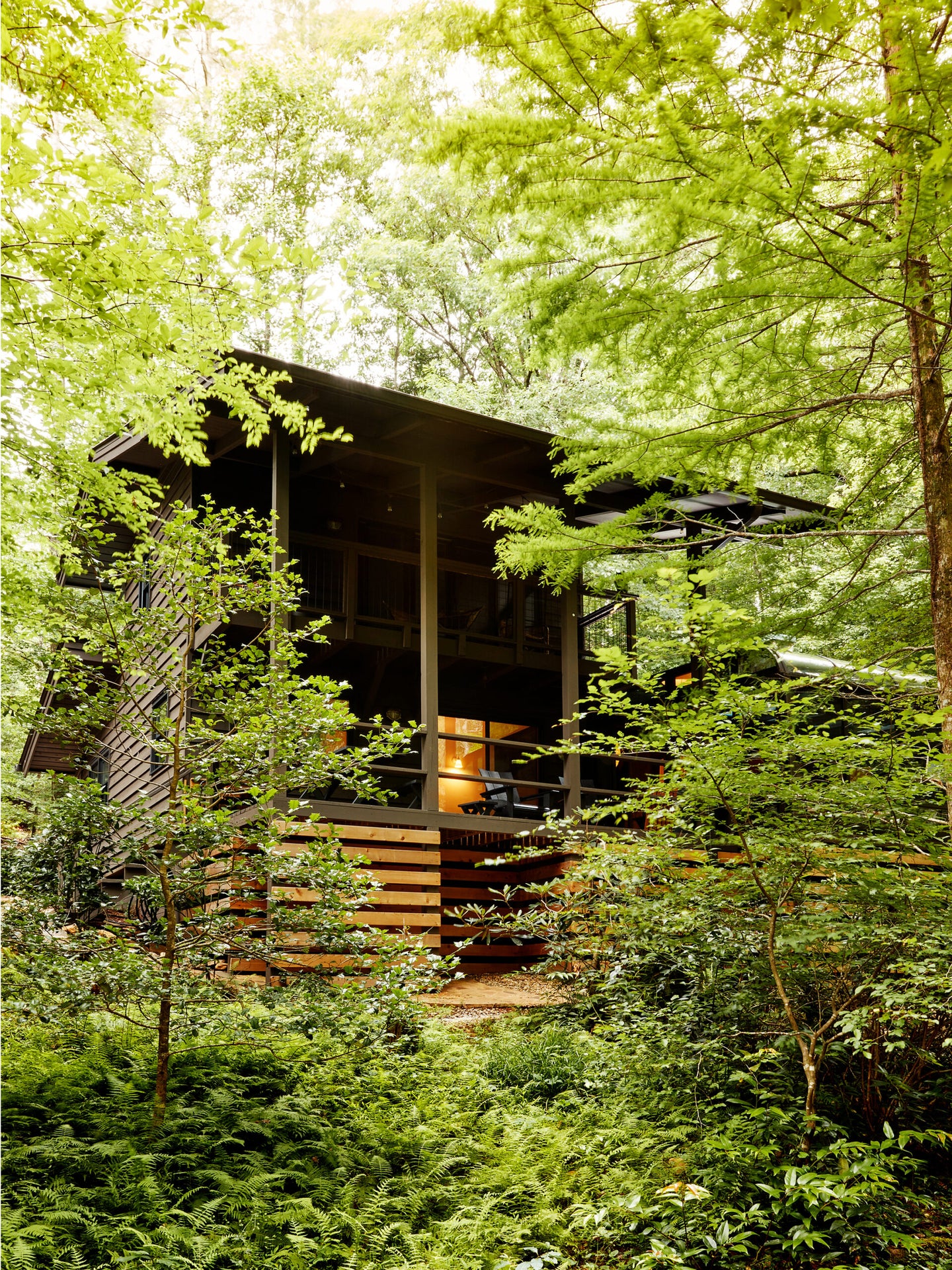 “Turn at this flag on an unmarked driveway and keep going until you reach a gate.” These were the directions that designers Kate Hayes and Krista Sharif of Hayes Little Studio were given for their client’s new northeastern Georgia getaway. So it’s not surprising that they missed a turn—and that was just the first visit. “We would drive by it every time,” Hayes recalls with a laugh. The pair would regularly have to loop back to the closest town to consult locals for a better route, a tactic even delivery truck drivers have had to pick up when struggling to find the way (the bad cell service certainly didn’t help either).

That middle-of-nowhere feeling was pretty much the point. Atlanta-based neurologists Amy and Taylor Harrison had picked out the wooded location, accessible only via a dirt road, with disconnecting in mind. They didn’t want distractions—not a single screen—in their off-the-beaten path, family-friendly escape on the banks of the Soque River. Their mantra? “More outside, less inside.”

Hayes refers to the Harrisons as frients—friend clients, so to speak. The quartet worked together on redesigning the family’s home in midtown Atlanta a few years prior, and she was the first person they called after buying the nearly 2,000-square-foot riverside house. “It was a classic pandemic situation,” the designer shares. “They were like: We have to get out here, but it needs to be drivable.”

The property, located just steps away from the water, is near one of the Southeast’s best fishing spots—and since Taylor is an avid fly fisherman, something in the area was a natural choice. But the structure was a total 1970s joint, complete with wall-to-wall carpet (the shaggy kind, even in the bathroom). At first, Amy was just looking for partial treatment, enough to make it enjoyable to be there. “I remember we did the walk-through and her telling us they might not even keep the house,” says Sharif. “They were originally planning on tearing it down, but have it nice for a couple years.”

While plans were being drawn up, and one cosmetic issue after the other was uncovered—especially in the three bathrooms and bedrooms—the light refresh slowly transformed into a full-blown renovation. And at some point along the way (perhaps when a fresh coat of paint breathed new life into the outdated kitchen cabinets), they all realized it felt good enough to keep.

Letting in light also helped. Once the carpet—bonus: fuzzy toilet covers—and frilly blue curtains were removed, it was all about opening up the main area. (Initially, the greatest source of natural light came from a curvy, old-school sunroom, but it was blocked off by a pair of doors.) “It was incredibly dark in the front rooms,” notes Sharif of the constant presence of shade. “Widening the openings was a game changer. It was a little oppressive because of all the wood; it felt like it was all coming down on you a bit.”

With the ceilings popped up, Hayes argued for something to fill up the extra space. An oversize fixture was the perfect fit to anchor the living room—where you could post up by the fire with a glass of bourbon—and connect it to the entrance, side music room, and glass-surround sunroom.

“As a big house, we didn’t just need ample lighting, but warm lighting on a larger scale,” Hayes points out, and hanging the 45-inch round Noguchi paper lantern actually took more convincing than keeping the original cedar-paneled walls. Knowing that the couple definitely wanted to retain all the wood and original stone fireplace, the designers had to brighten everything else.

They removed the dangerous-looking fans (as in, scarily close to your head) in the sunroom and re-stained the floors a saturated forest green recommended by their contractor, Jeffrey Thompson. They placed comfy leather armchairs from Anthropologie opposite a wood beer hall–style table and matching benches long enough to seat multiple kids (including their own 9- and 10-year-old). “The house is very indoor-outdoor; the atrium is the stepping stone between the two,” says Hayes.

In fact, natural elements were the main source of inspiration for nearly every piece of furniture or fabric the pair sourced, whether it was the rattan sconces or a dialed-back paint palette. “She’s a bit cool, transitional, historic,” Sharif says of Amy’s style, noting that it took a few tries to find just the right style. The designers landed on a modern retreat–meets–cozy mountain cabin look in the end, selecting plaids and leathers that would wear well over time; a wood stove; stone wall hooks; and a farm sink in the mustard yellow bathroom. Livable comfort was really what Hayes and Sharif were going for—and with groups of fishermen traipsing through the house in waders, or children returning from a day spent in old-growth woods and swinging above the water, it’s what the tranquil hideaway was calling for.

Splurges that were worth it: The Emmy sofa designed by Egg Collective in the family room, and covering the nearby ottoman in a Holland and Sherry plaid.

Biggest save: The kitchen—they purchased new appliances but kept everything else as is. There is this amazing scalloped detail above the window that we highlighted with the same soft black paint (Farrow & Ball Off Black No. 57) we applied to the cabinets.

Where we shop locally: For this project, we sourced many pieces from the Nicholson Gallery, Highland Row Antiques, and Antiques and Beyond in Atlanta.

Paint color that took the exterior from outdated to modern: Sherwin-Williams’s Iron Ore.