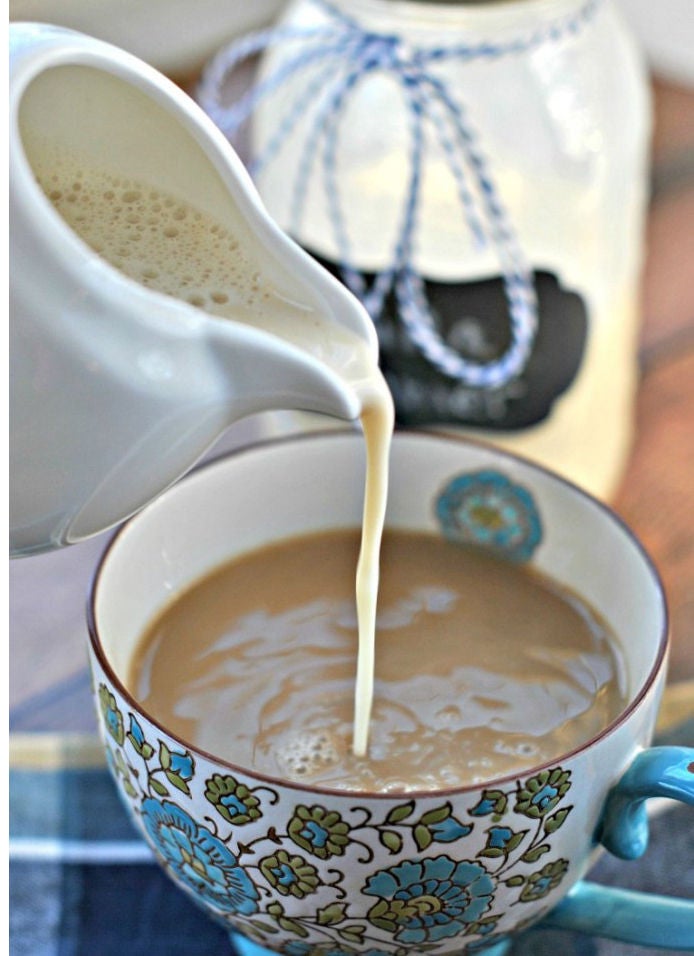 If you’ve never peeked at the ingredient list on your favorite coffee creamer, you might be in for a shock. Most read like a science experiment full of chemicals, trans fats, and artificial flavors. And the powdered varieties are even worse — yay, hydrogenated oil! At this time of year when many of us are cleaning up our eating habits, there has never been a better time to start making your own creamer. It’s far more flavorful, healthful, and seriously simple. Need dairy free? Organic? Paleo? We’ve got those too. Let’s get started.

French Vanilla is a favorite flavor, and who would have guessed that the homemade version takes only three simple ingredients? Combine one 14-ounce can of fat free sweetened condensed milk, 1 ½ cups of skim milk, and 2 tsp of vanilla extract. Mix until combined, and enjoy within a week.

Take vanilla coffee creamer to the next level with the flavor of chai, which is achieved by combining three delicious spices – all easily found at the supermarket. To make, combine 1 cup of heavy whipping cream, 1 cup of half and half, 1 tbsp of vanilla extract, 2 tbsp of honey, 1 tsp of cinnamon, and ½ tsp each of ground cardamom and allspice. Pop everything into a blender until well combined, and fall in love.

Special diets can be difficult, and NO ONE should be deprived of their daily coffee treat. No one! There are many Paleo recipes out there, but this one is simple, to the point, and flavorful — a treat for anyone, Paleo or no. Mix together 1 can of full fat coconut milk, 1 tbsp of either coconut palm sugar OR grade B maple syrup, and 1 tbsp of coconut extract.  So coconutty and so delish!

Tip: If coconut isn’t your fav, swap out the coconut extract for another, like hazelnut or almond. The coconut flavor in the milk is subtle, and will be easily overwhelmed by the deliciousness of the extract you choose.

If you can’t let go of holiday flavors just yet, this creamer is for you. Mix everything together in a large mason jar, shake vigorously, and enjoy.  You’ll need 1 ¾ cups of half and half, 1 14-ounce can of sweetened condensed milk, 6 tbsp of molasses, 1 ½ tsp of both ground ginger and cinnamon, and ¾ tsp of both ground cloves and nutmeg.

Starbucks lovers rejoice! This tempting flavor is a homemade take on the satisfyingly sweet caramel macchiato brew that we all love to sip – especially this time of year! Save a few dollars by mixing this version at home, and use it to flavor your coffee or tea all season long. To make, simply mix together 1 cup of milk, ½ cup of half and half, ¾ cup of caramel, and ½ tsp of almond extract. Blend, chill, drink, repeat.

Dairy-free definitely doesn’t have to be boring. This recipe, combining almond milk and coconut milk, is complex and full of satisfying creamy flavor. Mix together 1 cup each of unsweetened almond and coconut milk, 2 tbsp each of pure maple syrup and raw honey, and 2 tsp of vanilla extract. Place the first four ingredients in a saucepan, bring to a boil ensuring everything is dissolved together, and them remove from heat. Add in the vanilla extract, and store in the refrigerator until ready to use.

Tip: To give this creamer chai-like flavor and essence, mix in a few dashes of cinnamon, ginger, and clove or cardamom.

create your own creamer

As you may have guessed by now, DIY coffee creamers aren’t difficult to make. While there are plenty of tried and true recipes, you should also feel free to experiment with different flavors and create your own. Use a simple base as a starting point (1 cup of milk and 1 cup of sweetened condensed milk) and then add in ½ tsp of your favorite extract, like vanilla, almond, peppermint, coconut, cinnamon, or others. Additional spices may also be mixed in for even more flavor.  Going organic? No problem — everything on the ingredient list is available in organic form. Experiment, find your flavor, and NEVER use store-bought creamer again.

Every recipe above (except for the Dairy-Free Almond Milk) requires zero heat or cooking. To mix and store in the same container, follow this simple procedure: start with a large mason jar, throw everything in, shake vigorously, and then store the jar in the fridge. Easy!

Always check the expiration date on your ingredients before mixing up your creamer. This seems like a no-brainer, but milk and half and half have a relatively short shelf life, and you don’t want to guess (especially once the milk jug is no longer around to check).

Lastly, when recipes call for extracts, please use actual extract and not imitation. This will make a HUGE difference in the end result, and the relatively small amount of cost savings just isn’t worth it.