This Contemporary Cafe Brings the Grecian Seaside to Brooklyn 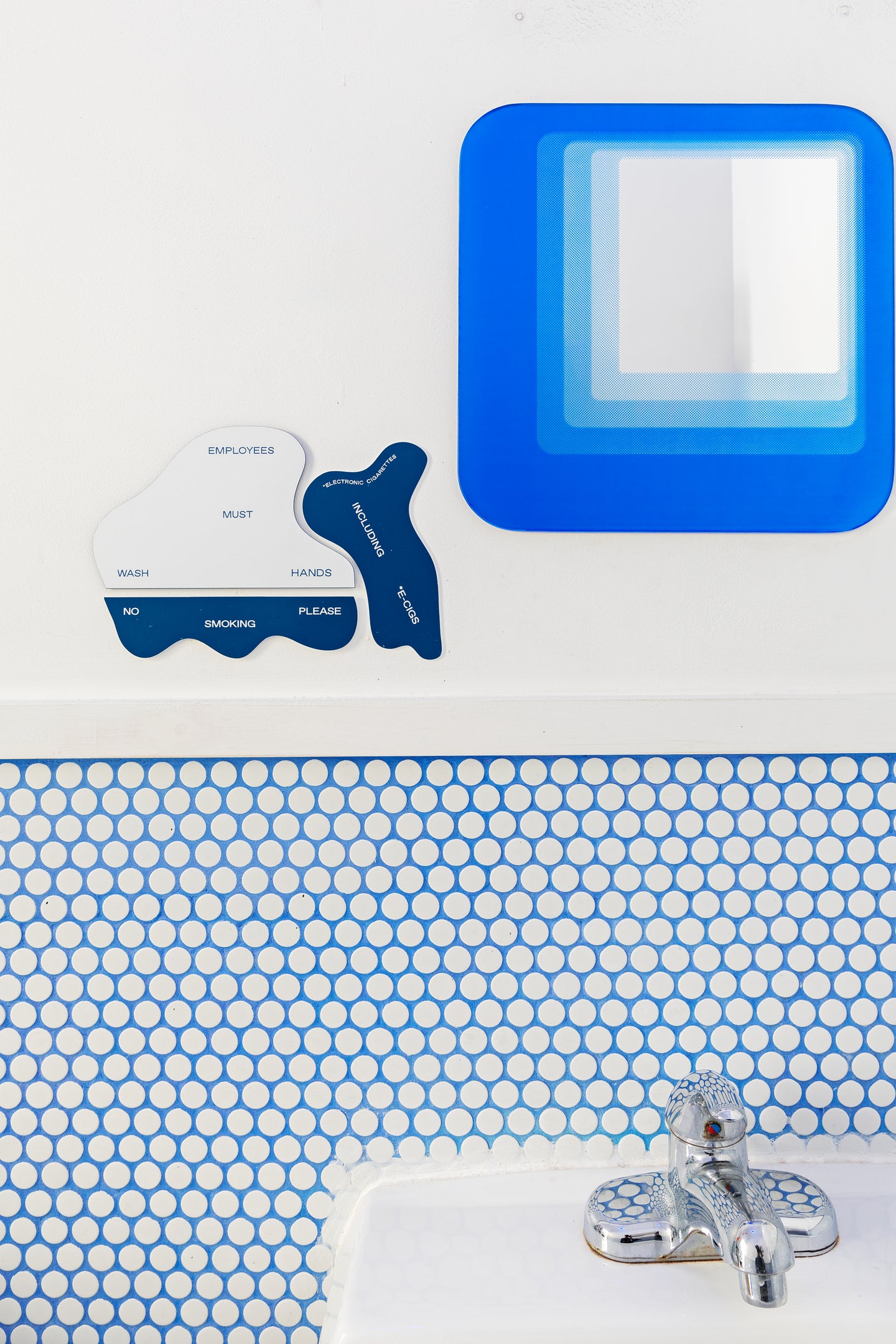 Step into any given coffee shop across New York City’s five boroughs—even a quaint, independent spot—and you’ll likely hear the patter of typing on laptop keys, the shuffling of patrons hurriedly pouring their milk, and the isolating mumble of private conversations and meetings. Domicile, a café and design marketplace that opened in Brooklyn’s Bed-Stuy neighborhood in February of this year, goes against this exact grain.

“We wanted to create a space that made a coffee shop into more of a wellness type of environment—not to be associated with meditation and yoga. This is wellness for the average New Yorker,” says Brianne McCabe, who co-owns the café with her husband, Danieu Johnson, both New York natives. “It’s a little oasis in a busy part of a busy neighborhood where people can gather their thoughts for a moment, or have a nice conversation with someone and actually be able to hear them.”

With just 300 square-feet to work with, McCabe collaborated with architect Henry Barrett to create a lounge-like area that offered versatility. Irregular, stucco stools, paired with matching built-in table surfaces, and a central iceberg-like ottoman organically divide the space and allow for flexibility for customers to decide whether they’d like to interact with others or enjoy a quiet moment to themselves—though McCabe has noticed, more often than not, the arrangements make way for group conversations and connections amongst strangers.

“Customers will chime in and then meet others—that’s happened on a few occasions,” she says. “It’s been really nice to develop that atmosphere and following that’s felt very organic since its inception.”

A playlist (curated by Johnson), largely composed of jazz and reggae, sets the tone of the café, while the textures and colors of the interior drive home its tagline as a “dwelling place.” With a palette of cream, white, and Yves Klein blue—all intersected with the sharp green of a monstera, fig, or palm leaf—Domicile has a seaside appeal that makes it seem easily plucked out of the Grecian seaside or Venice Beach, though it’s nestled in a bustling area of Brooklyn.

Dominated by abstract shapes and earthy textures, the space’s visual uniqueness has made it an instant haunt for creative types—designers of all sorts, models, architects, and artists—but it’s also, to McCabe’s delight—become a welcome place for long-time neighborhood locals to relax. “We wanted to provide something to the existing neighborhood and not take away,” she says. “We thought of what kind of textures and colors make people feel comfortable and want to engage with that environment—and it seems that it works for most types of people. They see this as a refuge.”

First collaborating with Body Language Shop, an independent brand that offers a large assortment of innovative, energetic plant holders, Domicile has also grown its home decor offerings (displayed just across from the seating area) to include a number of exclusive original objects. “This space—almost by accident, actually—became a platform for emerging designers who were testing out new products and new designs: things that they thought might be a little too far out of their comfort zone to actually pursue,” McCabe says.

By offering objects like ceramics by Recreation Center and Erica Prince, clay designs by Neenineen, paintings by Esther MacRae, and prints by artist Ellen Siebers, Domicile exposes its customers to fresh, innovative work, and designers a space to experiment and gain a new following. Customers can even buy furnishings found in the shop, like wall lights (designed in collaboration with In Common With) and the stand-out white stools by New Body through Domicile’s website. Plus, McCabe promises that there’s much more to come in the realm of home, with plenty of exciting new collaborations on the horizon.

“We try to push the envelope with what is practical versus what has been designed based purely on aesthetics,” McCabe says. “I wanted to create a comfortable environment for people to be able to come and gather within and interact with some objects that maybe they wouldn’t normally be drawn to in another setting.”

Domicile’s inviting and innovative design has attracted a diverse customer base, whose patronage has only propelled the shop forward, all the while achieving its mission to provide relaxation and reinvigoration—and not just the form of caffeine.

This Houston Beauty Store Takes Customization to the Next Level