10 Beautifully Detailed Places That Are Inspiring Us Right Now

The moody and monochromatic spots that prove that black is, in fact, a color. 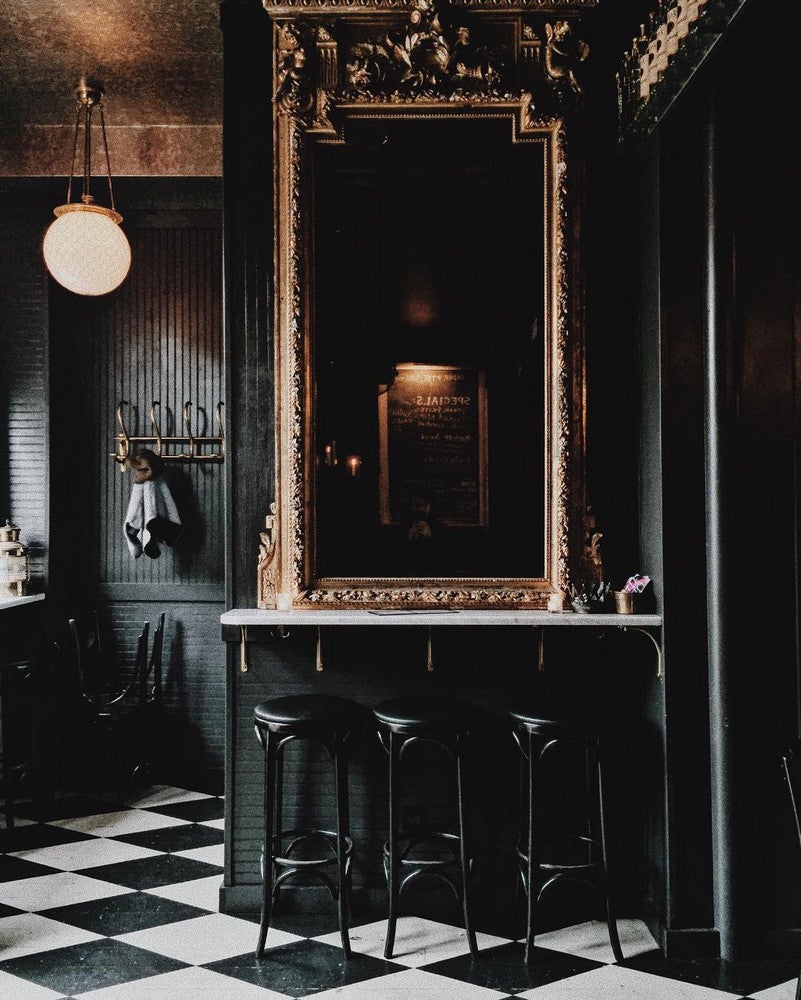 Mysterious and bold, black makes a statement by being a blank slate. It is the absorption of all color, a design chameleon of sorts. Depending on how you layer black with other colors in a space, the mood can shift dramatically. “It brings depth and mood where there is none, architecture where it is lacking, and contrast within a room,” says interior designer Patrick Mele. Want to go dark? Mele suggests painting a wall (or entire space) for major impact, or integrating the darkest hue as an accent, such as a black lacquered lampshade or an iron curtain rod. “Like a leather bomber or a LBD, black is eternally chic in décor.”

This Brooklyn spot is known for its brunch offerings, and judging from the menu alone it’s easy to see why. If banana waffles with walnut butter and maple syrup washed down with something called a “recovery martini” (hello, hangover cure) sound like something you can get on board with, make a reservation here on your next trip to NYC. New York, US

There are several black sand beaches all over the world, but the one in Vik is definitely one of the more impressive ones. The dark color of the sand is the result of lava from the nearby Katla volcano. Fair warning though: If you do visit this beach, steer clear of the actual ocean, as the strong waves can be dangerous. Vik, Iceland

Located in Sweden’s Treehotel (literally a hotel comprised of several chic treehouses), the 7th Room is arguably the coolest treehouse ever. Breathtaking panoramic views aside, the modern and slightly futuristic design of the space is reason enough to book a stay. Harads, Sweden

The Town Mouse is a self-described “small neighborhood restaurant,” but the uber cool decor looks on par with something you’d find in any urban hot spot. The sleek and contemporary design aesthetic matches the modern culinary offerings—unclear what whipped cod roe looks like, but we’re intrigued—perfectly. Melbourne, Australia

For a boutique hotel experience with all the comfort of a Parisian home, check out this hotel. French designer Sarah Lavoine crafted the space to be a mix of refined and welcoming, with bookshelf-lined walls set against an opulent-feeling backdrop.   Paris, France

Alexander Wang’s flagship store in Soho embodies the same urban vibe that the designer’s clothes do. The black and white interior uses simple yet striking features to keep the clothes at the center. New York, US

Craters of the Moon

This stunning landscape in Arco, Idaho, is made up of massive lava fields, and you can even crawl through “lava tubes” (caves formed by flowing lava) for an experience like no other. Idaho, US

The Covent Garden outpost of this British perfume staple is elegantly decked out in black and white accents, such as a bold chandelier and striped wallpaper that plays off the black-lined furniture. London, England

“A melancholy and futuristic sense of zen,” writes the AN design website of this monochromatic space. The Heike fashion concept store is set up in an old warehouse, featuring geometric architectural elements and moody lighting. Hangzhou, China

Pink Places to Visit Across the Globe Seeking Shades of Citron in the Most Unexpected Places Going Green: This Is How You Bring the Outdoors In