Which virtual assistant can buy the groceries, sing you opera, read the news—oh, and babysit your kids? We investigate. 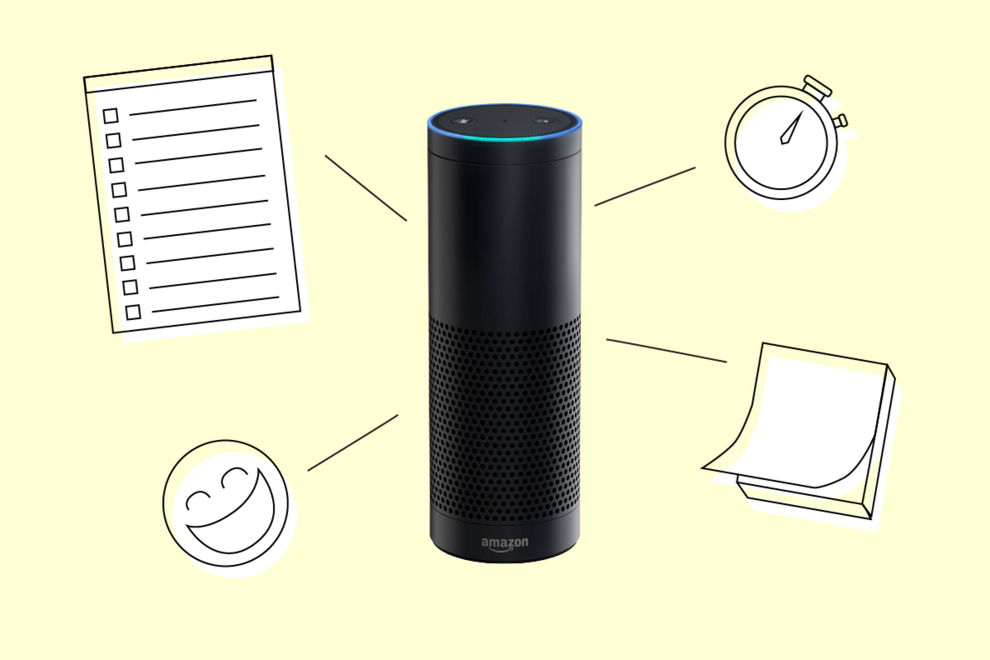 My husband Mark and I were given both an Amazon Echo Dot and Google Home as holiday gifts. Instead of regifting one, we set out to see which would be a better virtual assistant for our busy family of four that just moved across the country from New York to Los Angeles. Each had strengths and weaknesses. And each had some important things that were missing entirely. Alexa got the bedside table; Google Home sat on the kitchen counter. Game on.

Amazon Echo Dot has a pleasant personality. She looks like a hockey puck and has a name: Alexa. And she responds to it dutifully. She has hidden talents that can keep a kids interested, entertained, and in one place (by my bedside table, where she’s perched) for 20 minutes. The kids hover around her, waiting for answers. Alexa is the perfect babysitter. “Alexa, can you beat box for me?” She does. “Alexa, tell me a joke.” She has dozens of one-liners ready, such as “Why does Wally always wear stripes? Because he doesn’t want to be spotted.” She’s well-versed in poetry, haikus and riddles. When my kids ask her why the chicken crossed the road, she quips, “That’s really only the chicken’s business.”

Since we started keeping our family to-do list on Alexa, we’ve enjoyed a surge in our productivity. “Alexa, what’s on my to-do list?” gives us itemized reminders. My written lists work in theory, but they’re useless if I can’t remember where I put them. I once rhetorically asked Alexa where my keys were. She said, “try under the couch.” She also helps me do things the moment they come to mind, before they make their way onto a list. “Alexa, reorder agave syrup,” and she adds of a bottle of Wholesome Organic Blue Agave to my Amazon Fresh cart as I squeeze out the last drop. It’s miraculous.

Google Home looks like a 10-inch-high modernist sculpture on our kitchen counter. Her 360-degree speakers bring Ella Fitzgerald’s voice to life over the sizzle of sautéing chicken and vroom of the blender. It thumps through B.B. King’s guitar riffs as if there’s a soundstage next to the microwave. By comparison, Alexa sounds like flat elevator music, a bummer when I want to jam to hip hop in my room.

Having the right soundtrack is important in my home. When Mark asked Alexa to play Hanukkah songs, she said, “I can’t find Hanukkah songs.” However, Google Home automatically played a “Hanukkah Radio Mix” from YouTube. Within seconds, we were singing along to “Dreidl, Dreidl” instead of trying repeatedly to get Alexa to understand the request.

As overscheduled parents and entrepreneurs, Mark and I are constantly looking up things like “the safest car seat” or “best noise-canceling headphones.” Google Home compares prices at different retailers, finds reviews and reads them out loud. Alexa wants us to buy stuff on Amazon (no surprise there). She’s in it to win it, and just wants to fill our shopping cart. She’s the pushy salesperson who follows you around the store and asks if you’d like to start a fitting room. No, I’m just browsing, Alexa.

Alexa knows some stuff, but Google, of course, knows more. With two curious kids in the house, we’ve grown weary of Alexa’s “Sorry, I don’t know the answer to your question.” She gets stumped often. Our boys devour information, and the more they learn, the more questions they have. Now that we have a couple of electronic teachers in the house, it’s clear that Google Home is an Ivy League professor. Alexa’s a high school temp. “What’s the difference between a tornado and a cyclone?” “Why do farts smell bad?” “How many languages are there?” Google’s a smart cookie. (The answers are cloud formation, sulfur gas and 6,500 languages, respectively, in case you were wondering.) Alexa needs to hear questions phrased a specific way, and even then, she can be unreliable. That said, Alexa entertains my friend Marlo’s sons with her comedic rendition of “Jingle Bells.” Easton and Asher are especially fond of saying, “Alexa, sing Jingle Farts.”

Alexa is kind of robotic, but speaking to Google Home feels natural. Once you start a conversation with Google Home, it intuitively knows what you are talking about. If you ask “How far away is Mumbai?” it will say: “Los Angeles, California is 8,290 miles away from Mumbai, India.” You can follow up with, “What food do they eat?” without mentioning the word India again, and you’ll hear about goat curries and flatbread. Alexa will be stumped. Google can take it a step further. “Can you play some music from there?” Google plays pop Bollywood songs.

What’s Missing from Both?

On the downside, we need an Emily Post intervention! My biggest gripe with both of these devices (and my fear, really, about the inevitable trajectory of virtual assistant technology) is the glaring omission of manners. You can opt for “Parental Settings” on various Google and Amazon devices, but how did common courtesy fall through the cracks? We’re raising Sam and Miles with virtual people in the house, and yet their exchanges are designed to be uncordial. When used as intended, we have to bark orders at small speaking gadgets. “Alexa, set an alarm for 6 a.m.” or “Find me a vegan restaurant” or “Play some jazz.” These prompts are referred to as commands, not requests. The first time Sam spoke to each, he said, “Please” and “Thank you,” but there was no reciprocal  “You’re welcome.” Where’s the civility in that? Would it be so hard to program “My pleasure”? I’m trying to raise a couple of gentlemen over here. I don’t want them going to school and demanding, “Teacher, get me some pretzels.” In my artificial intelligence utopia, devices also have sneeze recognition, so you’ll always hear a polite, “Bless you!” during pollen season. If you scream “Ow!” after stubbing a toe, they’ll ask, “Are you OK?” Perhaps followed by, “Should I call your mom?”  If I say “Alexa, goodnight,” I wouldn’t mind hearing, “Sweet dreams, Polly,” after which she turns out the lights. Artificial intelligence needs to be synonymous with artificial kindness.

My assistants also struggle with gender equality. Why isn’t there a built-in guy option? The New York subway moderator is a man. I enjoy hearing him announce my stop and caution me to “Please stand clear of closing doors.” Why can’t a dude also tell me the weather and keep track of my grocery list? Gloria Steinem, have we really come a long way if all fake servants are soft-spoken, obsequious females? In fact, I’d love the option to install lingo or dialects. Imagine if Alexa were renamed Bubbe, a Yiddish-speaking yenta who says “Oy vey!” when she doesn’t know the answer. Much more tolerable than “I didn’t quite get that.” When I take something off my to-do list, she congratulates me with “Mazel tov!” And “Gezunteheit!” replaces “Bless you!” after my suggested etiquette upgrade is installed. The male counterpart could be a Mel Brooks type…or maybe a deadringer for James Earl Jones.

Both Amazon Echo and Google Home excel at the perfunctoriness: Both keep track of your calendar and lists. They play music, tell you the weather, news, sports scores, and facts. But they’re more than “smart speakers”—they interact. Google Home is a better tutor and sound system. Alexa is an entertaining friend who loves to shop. They both could use a lesson in etiquette and maybe some gender sensitivity training. All things not being equal, my family prefers Google Home. Google Home, $129, is available at store.google.com.

Note: The Echo comes in other sizes, which you can learn more about here.