After Years Pining Over This Whimsical Wallpaper, a Designer Finally Found the Right Home for It

It fits her client’s fun-loving personality. 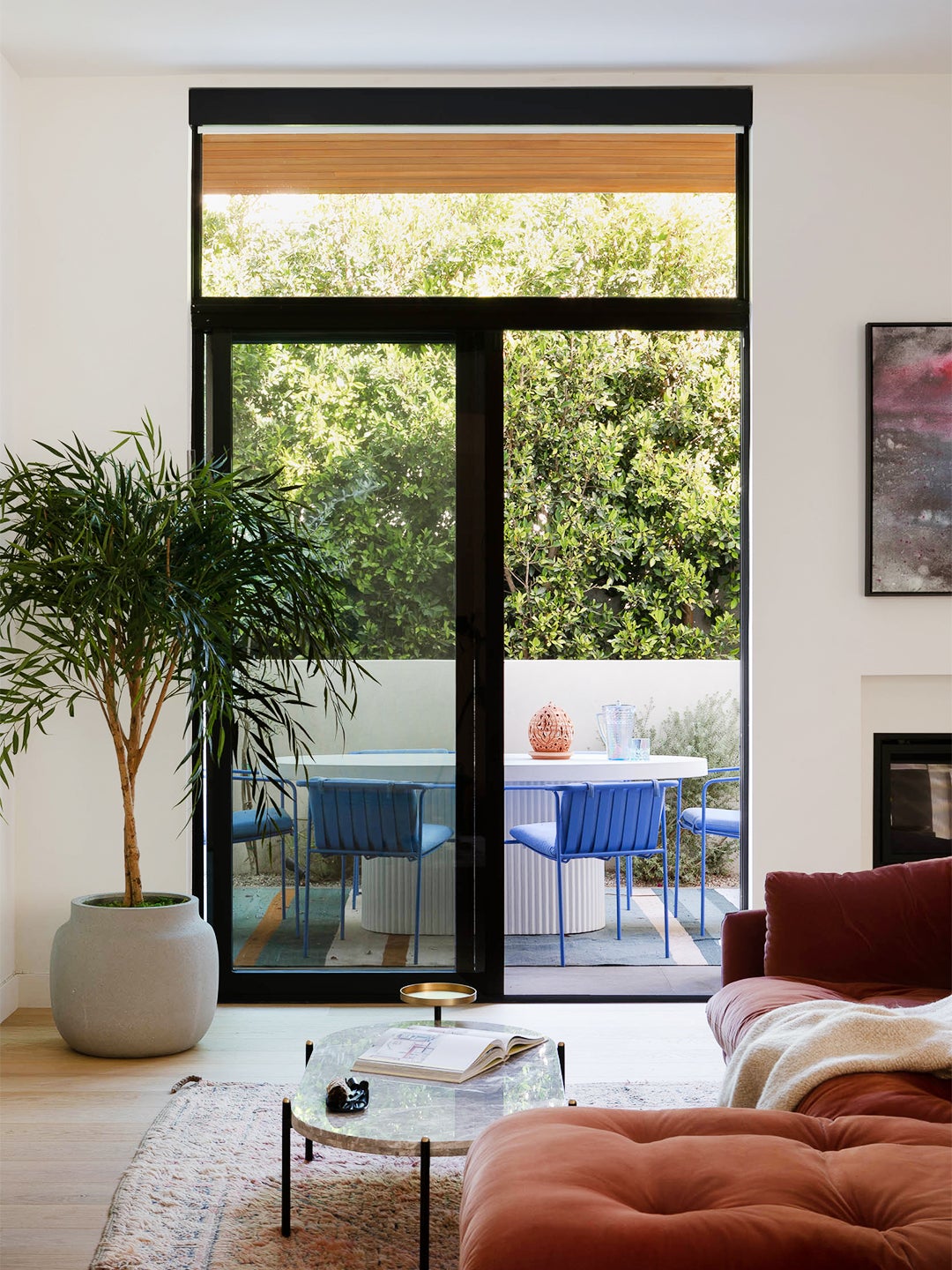 When you enter this West Hollywood home, it’s immediately clear: A minimalist does not live here. The ombré wallpaper and jewel-like mirror that greet you in the entryway sum up the client’s fun-loving personality. Still, even though she had an idea of the hues, fabrics, and artwork she wanted to work with, she needed someone to help her realize her vision.

It was her real-estate agent who played cupid between her and interior designer Barbie Palomino. But this was no ordinary brief: the homeowner’s Mexico-based parents would be staying with their daughter frequently (they visit three times a year for weeklong intervals), so they wanted to weigh in on many of the decisions, too.

Luckily, everyone hit it off over Zoom, and they only brought two major requirements to the table. The first? That the house reflect the vibrancy of their native country without going in the direction of looking like a theme-y resort. The second was coming up with solutions to combat the lack of closet space (everyone had grown accustomed to having plenty of storage in Mexico).

“We all did the call and got along so well,” says Palomino. The Hawaii-based designer relished the opportunity to speak Spanish with her clients. “I have Cuban heritage, and it was technically my first language, but I don’t practice it a lot anymore, especially since moving away from Los Angeles, so it was nice to get it back a little,” she shares.

Part of a new-build complex, the townhouse boasts tall ceilings and natural oak floors, but was a boring white box in terms of character. Palomino was reluctant to strip out the kitchen cabinetry for the sake of it, so she amped up visual interest in the adjoining living area with patterned vintage rugs and predominantly pink seating. The client already had a specific sofa from ABC Carpet & Home in mind: “An office she worked in previously had this sectional, and she called it her ‘nap couch,’” says Palomino, noting that she never actually slept on it (it was in a conference room where she and her coworkers would spend late nights working). “So when she had an opportunity to buy her own, she was like: ‘I need the nap couch again.’” The Italian-made piece might cost nearly $13,000, but its low-slung, honeycomb-paneled cushions and soft velvet-cotton upholstery promise she’ll will never wake up with a knot in her neck.

Although L.A.’s temperate climate means she can host out on the terrace or up on her private rooftop, a designated dining area inside was a must. The catch for her designer was that the home’s long and narrow footprint meant the only way to accommodate that was with a banquette seat. Palomino chose a marbled leather bench in lavender to harmonize with the splurge-worthy sectional. To make the space appear separate from the living room, she anchored the spot with a supersize print of the sky, flanked by two wall sconces from CB2.

Tucked away off the living room is the home office, where the desk doubles as a console table of sorts (the long cubby provides endless styling opportunities) and a gallery wall composed of prints and frames the client already owned—a win for the budget. “I love walking down to [this space] every morning,” she says. “Working out of it makes me feel so professional.”

In the primary bedroom, Palomino got to use a wallpaper of dancing nudes that she’d been saving on her Pinterest boards for years. “Her personality isn’t girly-girl, so I was thrilled that she wanted her bedroom to be this sexy, feminine oasis,” remarks Palomino. Sourcing the bed and nightstands from big-box stores (the former is from CB2; the latter from West Elm) meant she could allocate budget to have California Closets custom-build the nonnegotiable extra storage.

The client’s parents’ bedroom, meanwhile, skews on the darker side of the color spectrum with denim blue walls, a marigold chaise, and olive green curtains. “They weren’t sure that they wanted all the color, so it took some convincing, but now they love it,” reports Palomino. It’s the perfect space to unwind after their travels to see their daughter.

This article originally stated that the homeowner was a “20-something-year-old,” when she is in fact in her 30s. A correction was made on November 19, 2022.