Inside the upstate retreat, it’s all about white walls and airy vibes. 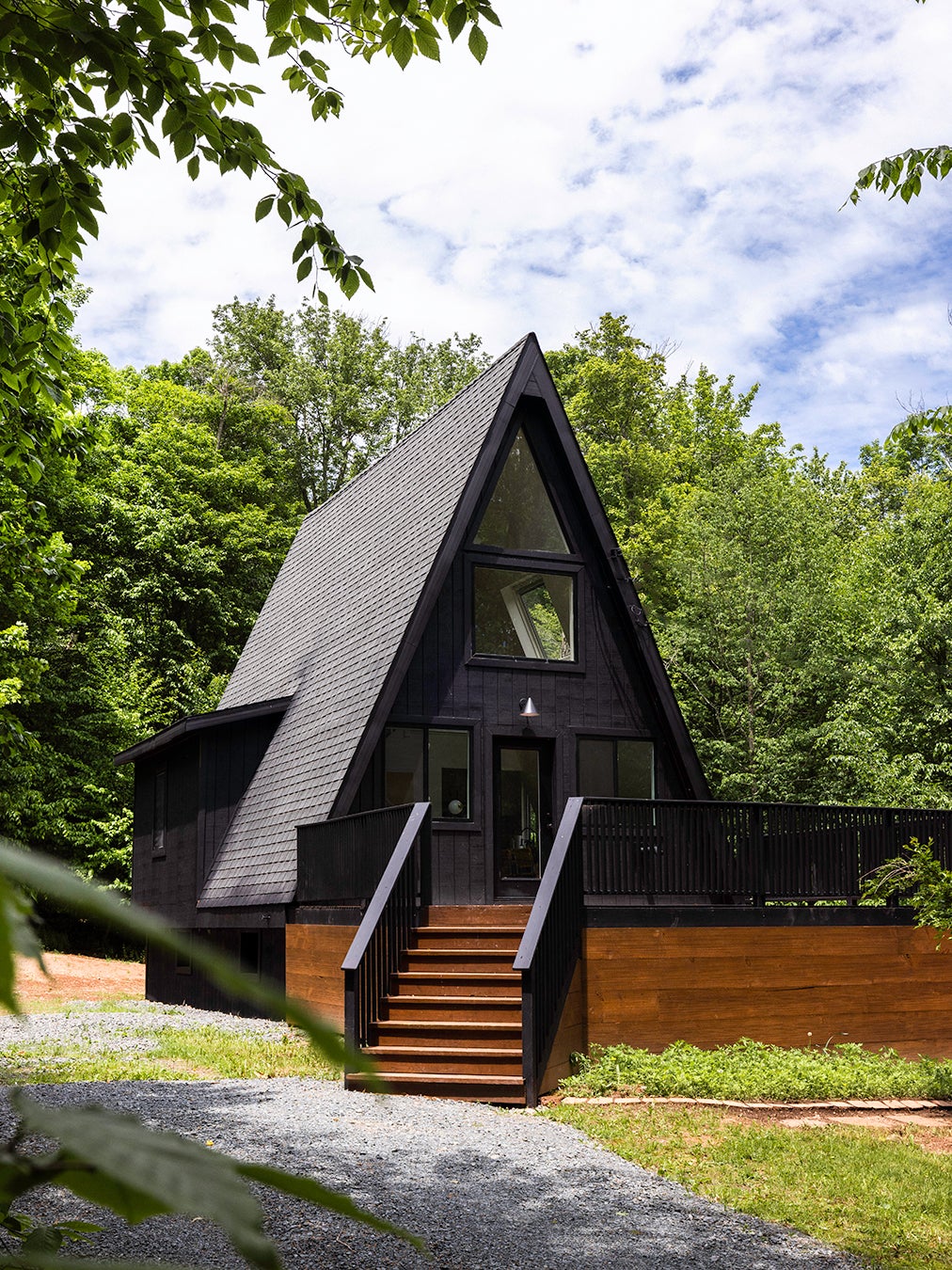 Caroline McKay had just one criterion when she began searching for an upstate getaway from her New York City studio apartment earlier this spring: No fixer-uppers. “People have been waiting on supplies and furniture forever. I wanted something I could use immediately,” explains McKay, a publicist for design-forward brands.

While her friends all imagined it would take months to find a move-in ready home—one that didn’t even require a new paint job—it took just 30 days (and many late nights) on Zillow for “the one” to materialize: a 900-square-foot A-frame with a moody all-black exterior in Livingston Manor, New York. She immediately inquired and found there was both good and bad news to be shared about the covetable cabin.

The good? It was listed for sale by the owner, a real-estate agent named Avi Adiv, who had flipped it. The bad? Ten-plus offers were already in the works, one of which was accepted.

“But he told me he didn’t think it would go through, and if it didn’t, he’d give me a call and I could come up and see it,” recalls McKay. A few hours later that same day, her phone rang with the update she had hoped for. “I literally dropped everything to go there,” she says, laughing, including borrowing her cousin’s car to make the last-minute trip. “I made an offer that same afternoon. Total whirlwind.”

A week later, McKay brought up a mattress to throw on the floor and considered herself moved in. All that had to be done to make her ’70s mod-meets-Scandi neutral dream a reality was to furnish the empty spaces—a primary bedroom in the loft upstairs, the living and dining room that now duals as her WFH office, and the downstairs guest room. Adiv had already done all the hard stuff: adding new appliances, hardwiring light fixtures, installing the new wood floors, and updating the bathrooms.

Adiv had also swathed nearly every single surface in white paint, including the kitchen cabinets, a move McKay decided to keep, as it made the entire space feel bright, airy, and bigger than it actually is. “I felt like too many colors in such a small space would make it feel like a dollhouse,” she says. “So I was very specific about neutrals with pops of colors that fill well.” But landing on those exact contrasting accent hues was easier said than done. Living with the space, as well as rummaging through estate sales in New York and Connecticut, helped her nail down a palette. The catalyst? A pair of vintage marble table lamps she scored at an online auction.

The poppy color was so good, McKay says she “was ferociously bidding against one other person” for them. Once she had the duo in hand, though, the drawn-out exchange was worth it: Everything else, from the velvety pillow shams to the striped linen duvet, fell into place. The red tone inspired other warm moments throughout the cabin, including the coral pillow covers, pink-y prints, and chestnut-hued throw blankets, all of which mingle neatly among the wood and brass details dotting every room.

After solving her color conundrum, other obstacles McKay had to troubleshoot included the super-angled walls and a lack of storage. “The triangle of the frame goes all the way to the bottom,” she explains. “I had to be really specific about sizes and dimensions.” The main pain point was finding a sofa that wouldn’t jut out too far from the sloped side. “I started looking for a range of 30 to 37 inches of where it would hit on the back, so it had to be pretty short,” she shares. The solution came in the form of a modular model from Valyou. “When I originally ordered it, it came in three pieces, so I was able to order an extra to give it more of an L-shape instead of adding a separate chair.” It’s now where she prefers to take Zoom calls, and where her pup, Ollie, loves to lounge.

Keeping a low profile with furniture was a trick she also employed in both bedrooms. The affordable, close-to-the-floor frames she found on Amazon make the tall ceilings appear even taller (and help minimize the hefty price tag of her sectional buy).

With the interiors all squared away, her design eye has been cast outside lately. She chose Adirondack chairs that match the cabin’s pigmented exterior, and a smokeless Solo Stove that’s ready for fall fires in the backyard. The deck, nearly the same length of the home, has been left relatively untouched; she has added a table and bench from Novogratz and is toying with the idea of a hot tub (a luxury she wouldn’t have ever been able to consider so soon if renovations had been a part of the plan or budget). For now, she’s content to leave a fixer-upper (way) in the future.

Real-estate agent (and house flipper) who made move-in day a breeze: Hunter Lake Development—Avi Adiv and Josh Rosh. Be sure to follow them, because they do great work and are always working on new projects up in the western Catskills.

Favorite local shop to frequent for vintage finds: Locally, I love Long Weekend in Livingston Manor. But honestly, I’ve found the majority of my furniture and accessories at Furniture on Consignment II (in Westport, Connecticut) and Monger’s Market (in Bridgeport, Connecticut). My mom and I love to go to estate sales and vintage shops in that area; it’s truly a gold mine.

Where I found the triangle dresser that looks like my A-frame cabin: This was actually my father’s, who bought it when we lived in London. He saw it in a store and really loved it, so my mother gave it to him as a Christmas gift. Apparently, it was originally crafted in Indonesia.

Why I still hung art on only two usable walls: I have always loved finding unique spaces to place art and decor. I think it unexpectedly draws the eye and makes you think more about the intention behind the pieces. You’ll find that there are a few spots where I had to be creative: I put one piece right above the floor at the end of the hallway and another tucked in a corner above the couch.

The pattern and textile that are so me: I always splurge on bedding and textiles, and I got everything from Pom Pom at Home, which is one of my favorite places for high-quality bedding. One thing that was very fun for me throughout this project was mixing different textiles and patterns that normally feel subtly opposing. I personally love the Pom Pom at Home striped linen duvet (I can’t tell you how many compliments I get on it) in the loft contrasting with the berry-colored velvet pillows. The pillows subtly match the red marble lamps (my favorite vintage find for the home), and the combination of the three really brings the loft bedroom together.