What Is Mid-Century Modern, Anyway? 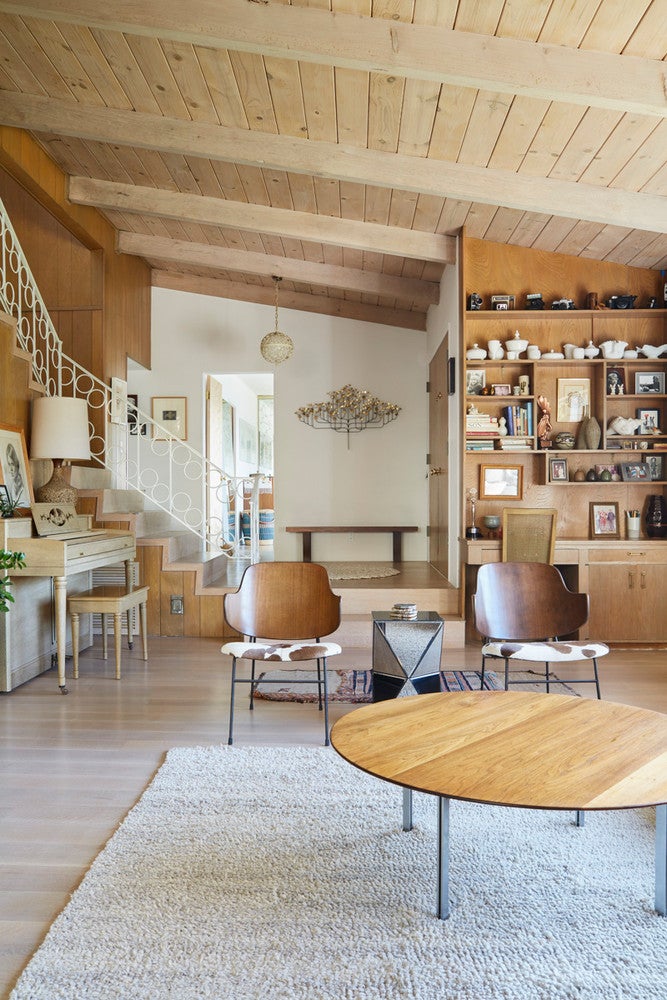 It’s an undeniable fact that “mid-century modern” has become an essential part of our everyday design vocabulary. But what would you do if an acquaintance at a cocktail party asked you for a minute-something description of the style? Could you do it?

Despite our obvious and enduring obsession, the term “mid-century modern” (first coined by Cara Greenberg in 1983) has taken on a new life as an acceptable, design-world buzzword for anything and everything that even slightly resemble this signature, Mad Men-approved aesthetic. When it comes down to it, very few of us probably have the knowledge—or the confidence—to unpack the basics.

In search of direction (and a little more clarity), we took our most pressing questions to the experts. Ahead, interior designer and mid-century enthusiast, Jessica Hansen of Tandem Design, and Dr. Barbara Lamprecht, an architectural historian who specializes in the rehabilitation of modern buildings and the work and designs of Richard Neutra, break down the basics of the beloved style.

“I expected modernism to be very authoritarian. You get rid of your stuff; you obey the rules,” recalls Lamprecht, who was asked to document the contents of the Neutra VDL House in Los Angeles, CA. “And in fact I found a house that was welcoming and alive. If I wanted to be by myself, more solitary, more quiet and embrace that, [I could]. If I wanted to party on down with a whole bunch of people spilling out into the garden it was absolutely all ready for that.”

Shortly after, Lamprecht experienced a second revelation: “You expect to be told where to go and how to go, and this house was such a contrast to that. That’s when it first began to dawn on me that modernism could be much more generous and relaxed than I had previously understood.”

What is the general timeline for mid-century modern?

FYI: You’ll likely get a different answer, depending on who you ask. For Lamprecht, the movement effectively kicked off at the end of World War II (around 1945 or 1946) and ended in 1966 with the ushering in of postmodernism. Though, as Hansen notes, some would argue that the movement actually started a decade earlier, in 1937, and extended into the mid-1970s.

What was the inspiration behind the movement?

“If you had to have one word that summed up mid-century—that includes post-war, googie architecture, mid-century modern, corporate modern—that would be optimism,” suggests Lamprecht, also now a real estate partner with deasy/penner.

Mid-century modern has roots in earlier styles, like Germany’s Bauhaus movement, and was also largely influenced by Scandinavian design. The widespread growth of the style was effectively fueled by the to-be-architects and artisans who returned back to the states following the end of the war. What ensued was a celebration of a carefree lifestyle, fostered by a collective sense of victory and hope for the future.

Mid-century homes are typically characterized by their integration of nature, flat planes, and large glass windows. “As far as how the movement affected architecture, it encouraged people to create open floor plans and to incorporate the outside into the design, allowing the outside and inside to work together,” explains Hansen.

Here are a few essential elements you’ll find in a true mid-century home:

Given the numerous technological advances during the middle of the century, designers and artisans were excited to introduce non-traditional materials (like plastic and fiberglass) into the mix. This same carefree attitude also led them to experiment with shape, composition, and geometry.

Here are a few standout characteristics:

Why do you think mid-century modern has made such a huge comeback?

“I think that mid-century design has stood the test of time. I would say that it became ‘vintage’ in the mid-80s and its popularity really exploded at that time and has continued to grow since the early ’90s,” says Hansen. “People love the sleek minimalist qualities in mid-century designs. There’s also a playfulness in the furniture and graphic design of that time that’s hard to resist.”

While Lamprecht notes that the craftsman happens to be the current favorite style of home amongst millennials, homeowners who want style and character (minus all the upkeep) may want to consider a mid-century abode.

“The surfaces are sleeker and smoother. There’s less maintenance,” she says. “If you compare furniture, houses, or anything that was built in the ’50s, it lasts. There’s a sturdiness about it, where as everything we buy now, we buy knowing it’s going to fall apart.”

For people who are interested in buying and refurbishing a mid-century home: What do they need to know beforehand?

“There’s a real fragility to mid-century houses—I’m not talking about the materials,” says Lamprecht. “I think we have to allow ourselves, and we have to allow the house, an opportunity for quiet before we jump in and start ripping things out. If you want to change a house and put your stamp on it, buy something else. If you want to learn how to live with a style and let it grow on you, just slow down.”

For those of us on the hunt for true mid-century pieces, what types of questions should we be asking before they purchase a piece?

“Go to auctions, where you can feel the furniture and get a tactile understanding. If there’s one particular designer or architect that you’re interested in, find as much literature on that. I always like to look under things, look at the framing, and see if you can see a demonstration of provenance in a stamp,” Lamprecht says.