Of Course, This Designer Had a Perfectly Imperfect Wedding Tablescape

From the fruit bowls to the candlestick holders. 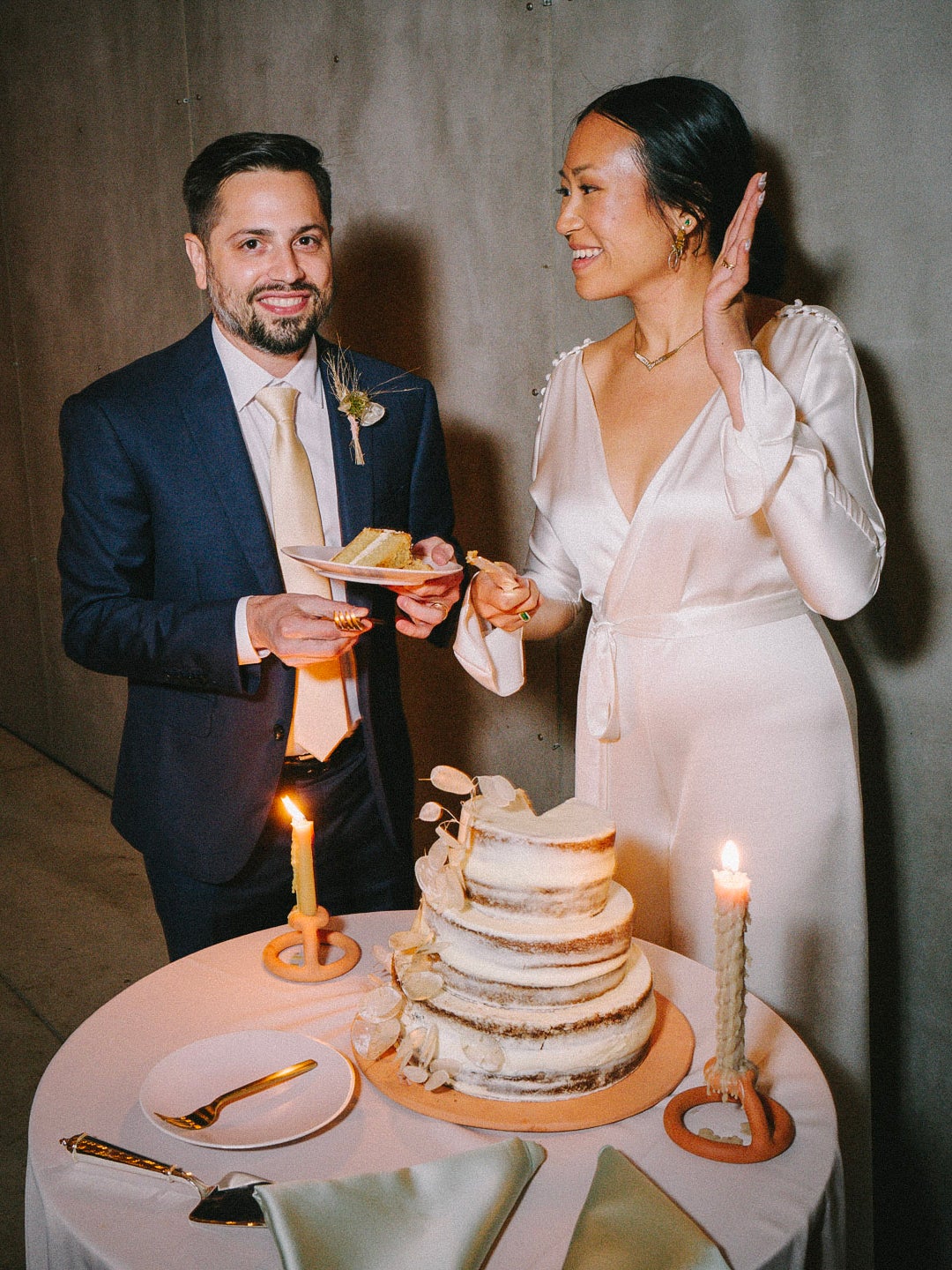 Designer and Sin founder Virginia Sin and creative director Ferdinand Daniele had crossed paths in hallways and elevator banks—they both worked for the same advertising agency. But it wasn’t until they ran into each other on a sidewalk in Williamsburg, Brooklyn (Virginia was lugging an ex’s stuff to a friend’s place; Ferdinand was on his way to get his hair cut) that they really saw each other. Five years after this chance encounter, Ferdinand proposed to Virginia on the same street, in front of the same building. “I didn’t cry—I actually screamed. He did a good job at surprising me,” recalls Virginia.

The wedding planning process was a collaborative effort, but not unlike designing their home, there was compromise involved (his style skews minimal; she’s more wabi-sabi). “If it was up to him, our apartment would look like Donald Judd’s home,” says Virginia, laughing. The couple riffed on each other’s ideas when it came to little details, like selecting the typeface and layout on the invitations, until they landed on a modern peach and olive green winner. As for the blush and terracotta tablescape, that was all Virginia: She decked out the reception space at Gather Greene with her own vessels, candlesticks, and other sculptural objects. Here, she breaks down the art of arranging their upstate New York wedding.

Narrow Down Your Priorities

It didn’t take long for Virginia and Ferdinand to realize there’s no such thing as perfection. “In my 20s, I thought I had to put my life savings into a wedding,” says Virginia. “Now that I’m older, it was just about how do we throw a really great party.” The pair focused on the three elements most important to them: the food, the flowers, and an epic honeymoon.

They spent the most time exploring their catering options, given the dinner would take up a good chunk of their budget (they tried six or seven places before landing on Comparti). For the arrangements, Virginia passed off a six-page mood board to florist Kelsey Ter Meer of Heart and Soil Flowers, who came back with images of Spanish moss, marigolds, cockscomb, and feathertop grass. (The whimsical assortment would eventually be displayed in Virginia’s handmade vases and on the walls of the pavilion.) When it came to the things that didn’t make their must-have list, the couple got extra clever. In place of a live band, for example, they booked a stellar DJ, Cosmo Baker, who doesn’t typically do weddings.

Infuse the Space With a Sense of Nostalgia

Now a part of her eponymous line, Virginia originally designed her Spoons vessels and Pillow Talk vases for her wedding day. The former pieces, in particular, were inspired by her and Ferdinand. (The cuddling terracotta containers are meant to look like two people lovingly nestled together.) The objects were displayed alongside her Uni and Duo candlesticks and Prong fruit bowls, which she filled with cloth napkins so they could double as bread baskets.

“A lot of my inspiration comes from personal memory.”
Photography by Daniel Paik

Virginia and Ter Meer filled in the gaps between the vignettes with produce (think: artichokes, plantains, and half-sliced oranges with flowers coming out of them). “A lot of my inspiration comes from personal memory,” Virginia says. “In the Chinese culture, when you go over to someone’s house, you bring them fruit, not a bottle of wine.”

There was no elaborate baby’s breath arch or aisle lined in pampas grass when Ferdinand and Virginia said “I do” in the woods—just two wildflower arrangements that were made to look like they grew organically from the ground. “I wanted it to feel intimate and just about us,” she says. “I was so nervous that I accidentally put Ferdinand’s ring on his middle finger. That was pretty hilarious.”

Ferdinand and Virginia saved a moment for themselves during the dinner by sitting on their own. Their thinking? They wanted to actually enjoy the food, and they didn’t want to have to choose who got to sit next to them. “Friendships are hard to define—especially if you’ve known your friends for 20-plus years,” says Virginia. Instead of a traditional wedding party, the pair invited 17 other couples to spend the evening in the venue’s cozy A-frame cabins. Two nights later, Virginia and Ferdinand jetted off to Italy for their honeymoon down the Amalfi Coast, up to cave-dotted Matera, and ending in Puglia. “I think if we had waited a few weeks, we wouldn’t have gone on the trip,” she says. “We had to leave immediately.”

See more stories like this:  How a Couple Left Their Stamp on Their Wedding—No Monogramming Involved We Bought Our Wedding Flowers at 5 a.m. on the Morning of the Ceremony This Wedding Married India, Pakistan, and Italy in One Floral Fantasia