15 romantic movies that are NOT “the notebook”

for anyone over that "if you're a bird" thing... 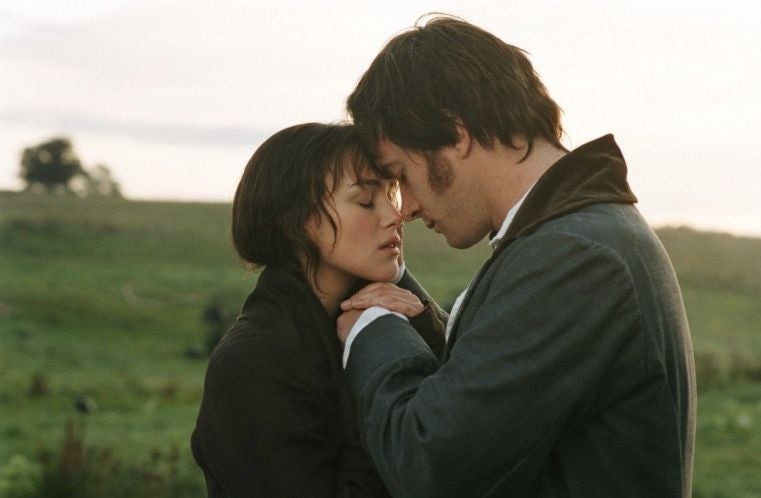 eternal sunshine of the spotless mind

If you have trouble envisioning Jim Carrey as a romantic lead, Eternal Sunshine of the Spotless Mind will change your mind. This heartbreakingly beautiful film combines the trippy idea of literally erasing painful memories and people you want to forget with an amazingly realistic portrayal of falling in and out of love.

Pick your version! Whether you love the classic Colin Firth BBC miniseries or the more recent film starring Keira Knightley and a slew of up-and-coming stars, this witty, lovely story of British society in the early 1800s is adored unabashedly.

There have been plenty of Cinderella remakes, and this version starring Drew Barrymore is among our faves for its early feminist take on the character. Much of the storyline unfolds as in the fairy tale, but Danielle’s strong character and sense of self make for an appealing, empathetic, and identifiable woman who finds her equal in a handsome, yet conflicted prince.

Pre-GOOP Gwyneth Paltrow’s Oscar winning turn as Viola de Lesseps, an aristocratic women who dreams of being in the theatre and who becomes the muse and love of William Shakespeare, is completely endearing. The film is quick-witted, humorous, and touching and even manages to give these star-crossed lovers a (somewhat) satisfying resolution.

Satine is a celebrated courtesan and the crown jewel performer of the Moulin Rouge; Christian is a penniless writer. Of course, they fall head over heels in love despite their disparate stations in life. Killer dance sequences, dizzying special effects, and musical covers of songs ranging from “Like a Virgin” to Bowie’s “Heroes” accompany their tragic love story. And yes, Nicole Kidman and Ewan MacGregor can really sing!

Romance is just one of many themes in this acclaimed film, which follows Jamal, a game show contestant in India as he answers “Who Wants to Be a Millionaire?”-style questions by flashing back to moments in his own past. Delving into issues including family relationships, poverty, and politics, the enduring bond between Jamal and his childhood love will have you rooting for the two to make it despite facing seemingly insurmountable odds.

After learning that his wife cheated on him, family man Cal attempts to be a swinging single with the help of a young, hunky Casanova named Jacob (played by Ryan Gosling). When Jacob finally meets someone worth committing to, Cal realizes that fighting for an old, imperfect love is better than the novelty and complications of the single life.

Richard Curtis (who also directed Four Weddings and a Funeral and Love Actually) takes on time travel in this endearing romantic comedy about a young British man who learns that he has the ability to revisit times and places in his past. Determined to use this skill to improve his love life, he meets and falls for an American played by Rachel McAdams. About Time is a love story in the traditional sense, but also a love letter to family and appreciating the seemingly small moments in life.

Yes, it’s been among your favorite movies since you were a kid, but that’s no reason to exclude The Princess Bride from our list of favorite romantic movies. It’s hard to improve upon the everlasting love that exists between Buttercup and Westley, not to mention the multitude of other timeless characters and the clever quotes that resulted from this movie. If you’ve got kids, you can include them in the Valentine’s Day movie watching. As you wish.

We couldn’t resist including this ’80s fave on our list. Because we can’t listen to “In Your Eyes” without thinking about it. Because we always wished someone would hold a boom box over his or her head to serenade us from outside our bedroom window. Because Lloyd Dobler (John Cusack) is the ultimate loner/misunderstood guy-next-door who actually gets the girl.

Women are often the ones portrayed as lovesick, while men are shown as commitment-phobes, and this charming, modern film flips the gender tropes (and is set to an awesome soundtrack). Going back and forth in time to particular days during one couple’s courtship reveals much about the way love affairs begin and end.

Kenya is a driven, accomplished, workaholic who doesn’t have time for a relationship. Things get complicated when this bright yet guarded woman falls for her landscape architect. Something New realistically explores cultural norms and values as well as how how our families, social groups, and dreams impact our romantic relationships.

Love after the age of 40 is often hard to find on-screen in youth-obsessed Hollywood. But Something’s Gotta Give is funny, sexy, and smart, with Jack Nicholson as an aging playboy and Diane Keaton as an accomplished, divorced playwright who thinks that her chances of romance are over. And since it’s a Nancy Meyers film, there’s a great sense of place and a Hamptons house we wouldn’t mind spending the rest of our lives in.

We didn’t expect this rom-com to be so romantic and touching. There are plenty of laughs, courtesy of writer/star Amy Schumer as well as Bill Hader and LeBron James, but the touching details and relationships in this very of-the-moment film make it one of the most heart-warming of the year.

Sure, there are love stories a plenty in this innovative film, consisting of short, yet moving vignettes from celebrated directors and actors. But really, the leading lady of them all is Paris, making this movie the perfect one to watch whether your beloved is by your side or not.