Budget-Friendly Tiles Laid the Groundwork for This Outdoor Living Room

Plus a clever use for leftover stone. 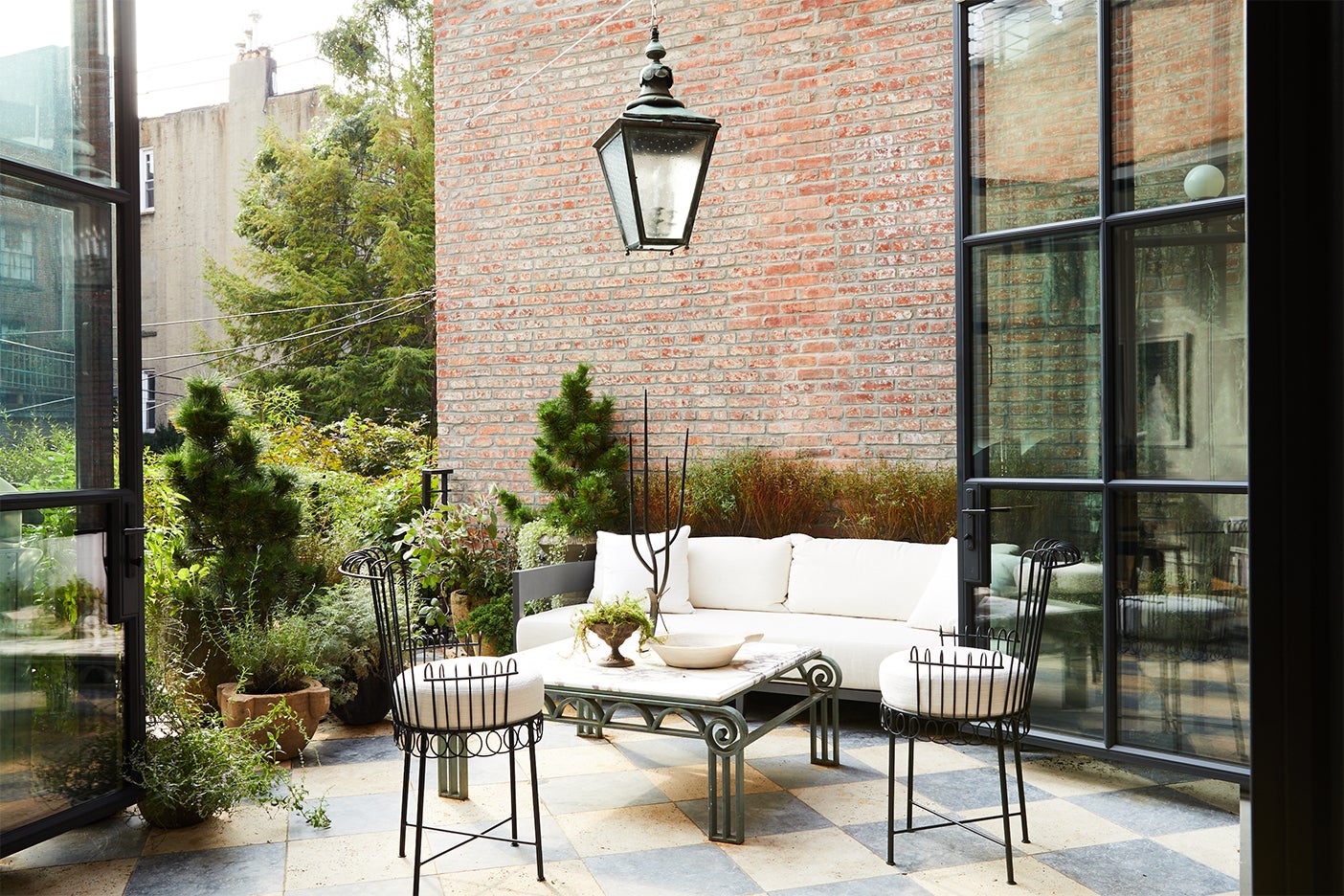 Everyone told Athena Calderone to go with simple bluestone floors for her outdoor terrace—it’s what everyone else loves to use, her architect and husband told her. “That’s a big indicator to me not to do something,” says the Brooklyn-based designer and EyeSwoon founder. Calderone quickly found herself on the hunt for two-tone marble tiles, reminiscent of something you’d see in a classic French château. She eventually found a stone company in New Jersey of all places that could source her dream tiles (a blue-gray marble and sandy-toned travertine) at the right price ($7 per square foot). “Those checkered floors make my heart go pitter-patter,” she says.

The graphic find was the cherry on top of all the work Calderone had already put into the space. When she and her family moved into their townhouse, the terrace was situated within an L-shaped crevice off the kitchen and only measured 6-by-10 feet. It wasn’t until they made the decision to open up the back of the house to the interior with two sets of custom bifold doors that she realized they could push the balcony out and make it a square. “When the doors are open, it feels like another living room,” says Calderone. From the sculptural greenery to the vintage chairs, now clad in Sunbrella fabric, she shares a few small ways she made the outdoors feel one with the interior.

The home’s contemporary lines called for a few touches of something old. That’s where the 18th-century pendant light came into play. The period piece still has its original verde green patina, but Calderone updated the fixture by running electricity to it. “It’s a bit grittier to me,” she says. “I like smashing these beautiful, historical details with a modern sensibility.” Calderone’s husband suspended the piece from two airplane cables, secured to the wall with eye hooks so it looks like it’s floating.

Get Crafty With Stone Remnants

The 1930s Art Deco coffee table Calderone sourced from Chairish originally came with a glass top that was not up the designer’s alley. So she went to her stone fabricator and asked if they had any leftover countertop cutoffs from kitchen projects she could work with—they did. “There are certain things that I really indulged in, like the doors, but then there are pieces like the table that I got crafty with,” she says. The ’50s Mathieu Matégot chairs were another big save: Calderone scored the set on eBay (they were a steal because they were white and rusted). She sanded them down and spray-painted them black. “It’s so important to exercise patience in design,” she says of hunting down the seating.

Calderone applied a design-minded eye when picking out the greenery, too. In an effort to make the brick wall less of an eyesore, she chose a sculptural Weeping Blue Atlas Cedar for the corner. She originally wanted to line the back of the Restoration Hardware sofa with olive branches, but knowing they wouldn’t do well in the NYC climate, she opted for a Dwarf Leaf Arctic Willow, which has a similar wispy form and complemented the blue undertones of the nearby cedar. “I love this idea of broken symmetry,” she says of mixing up the heights of the plants. “I trusted the textures I know and love and played with composition.”

Growing a garden in a city has been a learning experience. Calderone has paid close attention to which species get around tossed around in the wind (her Russian sage didn’t last long) and which ones thrive in southern exposure (the bushy pine tree). Like the furniture, her pots are a mix of big-box buys (think: Restoration Hardware and Terrain) and vintage. “There’s definitely a lot of trial and error,” she says. “But I like that things are always a little less perfect.”