The key to staying zen? A bathtub in your kitchen, of course. 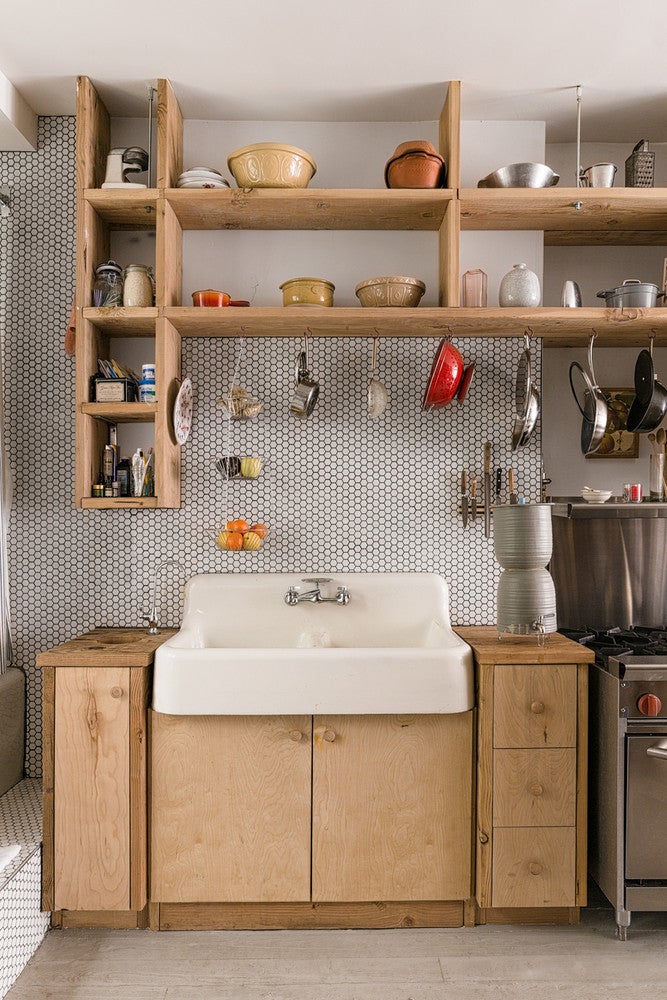 When it comes to small space living, New Yorkers know best. And when you look at an apartment as stylish, innovative, and functional as yoga instructor

’s, it’s hard to argue with that statement.

When the co-founder of Sky Ting Yoga began the arduous process that is apartment shopping in New York, she knew that of the whole city, she wanted to be on the wide, sun-filled street of Lafayette—a Soho street that gave her easy access to her studios, and is bustling with activity. But she also was looking for a space that she could make into her own.

And lo, she found the perfect spot: a 500-square-foot walk-up in an older, no-frills building. “This place really embodied that old school New York charm I was looking for,” she says. There is no doorman or elevator, instead the apartment is charming for its style and character. It had “good bones” as many would say, plus the location was unbeatable, so Jones went ahead and rented the place and worked with Nick Poe to design it and make it her own.

On the quest to create a space that had everything she wanted (and needed) within the confines of an old Manhattan building, she started by taking down most of the interior walls. “It’s a tiny space, and I didn’t want to feel claustrophobic, so I made it more open,” Jones says.

Now the apartment is divided into three designated areas: a living area, bedroom area (complete with a king size bed), and kitchen/bathroom area. Yes, there is a tub in the kitchen.  “I like how everything is exposed,” Jones says. “I can see all of my stuff so I make sure everything is organized and beautiful. I’m constantly throwing things away because I can’t have any clutter. I’m constantly looking at everything.”

That’s actually Jones’s biggest piece of advice for fellow small space dwellers: eliminate the clutter and keep it clean. “Even one piece of clothing on the floor will make the whole thing feel messy. Having a small space is fun because it forces you to be neat; you don’t need that much stuff,” she says.

But in order to keep the stuff she does have tidy and in their place, Jones enlisted contractor Joey Ting to create custom shelving that maximizes storage and style.

In the living room, yoga bolsters serve double purpose as the cushions on a custom futon couch, while built-in shelving gives some extra space to store smaller goods.

A large, white farmhouse-style vintage sink takes center stage in the kitchen, while tiny white penny tile cascades up to the ceiling. The raw wood cabinets and upper open shelves were another custom job, and add to the craftsman, utilitarian feel of the space that Jones wanted to cultivate.

A perfectly sized table was fabricated from salvaged wood beams from the apartment’s original walls.

Perhaps one of the most unique features of Jones’s tiny space? Her bathtub, which sits adjacent to the kitchen and happens to be her favorite place in her home. Replacing the old standing shower, Jones opted for this vintage tub that works seamlessly with the rest of the apartment. “My friends fight over who gets to stay at my place when I leave town so they can use my tub!” Jones says. “I knew I really wanted a tub, so it’s my favorite part of the space.”

All in all, Jones’s sweet Soho transformation only took about two months, and she is thrilled by the results. The tranquil, yet highly functional space is a lesson in “less is more” and proves that small space living can be oh so stylish.