And they aren’t painted white. 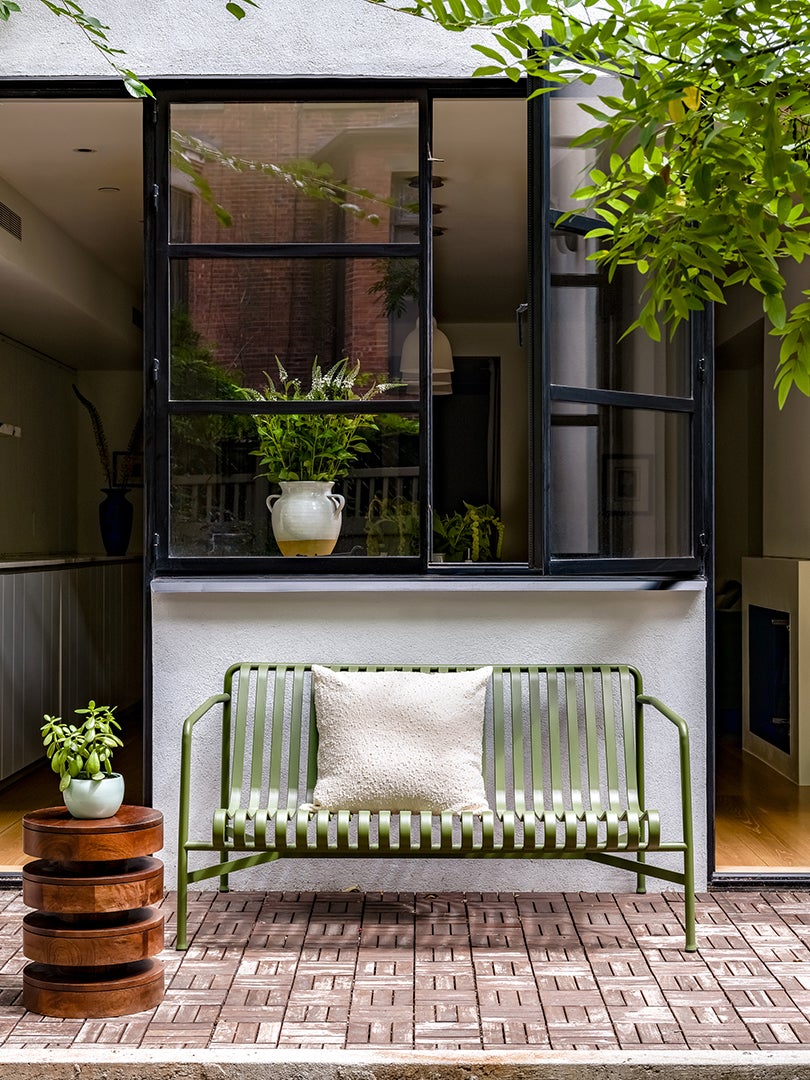 It started with the marble. Before any walls came down or paint swatches were selected, Andrea Fisk and Jess Thomas Hinshaw of Shapeless Studio took their clients—a young New York City couple who had recently made the move uptown to Harlem—to their first stone yard. “We probably looked at like, I don’t know, 100 different kinds of stone with them. But when they came to this one, their faces completely lit up,” recalls Fisk of the swirly, veined turquoise Calacatta. “Honestly it was like watching someone fall in love at first sight.”

It’s a sentiment that both Fisk and Hinshaw can relate to. “We believe in the power of natural materials; you can have an emotional response and connection to them,” says Hinshaw. From there, the duo knew the stone soul mate had to be the star of the renovation, so much so that they extended it from the kitchen into the living space (and even into the bathroom as the vanity countertop). In fact it became the basis of the home’s entire color scheme: beige, blue, green, and gray.

Although the marble was the heart of the transformation, the main reason Fisk and Hinshaw were called upon was to figure out how to best utilize a space rare to most New Yorkers: a backyard. As a 892-square-foot railroad unit, natural light was already hard to come by, and a plexiglass-like enclosure (complete with faux grass) was blocking the sun from streaming into the back of the apartment. It was the first thing to go, replaced with a wall of windows and two steel frame doors. The barely there architecture not only expanded the view and light, but gave back enough outdoor space to add a garden. “We wanted to connect the inside to the outside,” says Hinshaw. “One of the clients is from New Mexico, and I knew she was used to the sun and warmth and missed that.”

In the bathroom, Shapeless Studio used a different tactic to brighten up the space, despite a moodier palette, accentuated by walls in Farrow & Ball’s Green Smoke. “When a room doesn’t have a natural light source, we like to have a little bit of sheen,” says Hinshaw. For this project they sourced handmade tile from Manor Ceramics in a pearlescent finish. “It spreads the light around and adds that glimmer,” she adds.

Aside from the apartment being in need of a literal glow-up, the couple had no strict design directives for Shapeless Studio to follow. They did have a Pinterest board, however, which was filled with images of kitchens featuring big windows leading out into a garden and deep, rich colors—check. So Fisk and Hinshaw started experimenting. “In a lot of apartments where there’s one main living space, the kitchen is sequestered in a small corner,” explains Fisk; this was definitely true for their clients’ place. Shapeless Studio set out to rethink that.

“We wanted to break down the border of where the kitchen begins,” adds Fisk. Placing a dining table smack-dab in the middle of cabinets on either wall helps it do double duty as an island, but Shapeless Studio took it one step further by extending one length of the cupboards painted in Benjamin Moore’s Gray Owl all the way into the living room. “We did a vertical, shiplap-like paneling so that it didn’t exactly feel like a kitchen,” says Fisk. It also brought in some subtle texture; the vertical lines help break the cabinetry down into manageable pieces for the eye. The result is something that looks more like a continuous credenza. “And we did all panel-ready appliances (dishwasher, refrigerator, even the TV) to help those disappear more,” notes Hinshaw.

One of the rules Shapeless Studio does tend to stick to is limiting a project to three (or four, at the most) main materials. Here, it’s a mixture of marble, wood, and steel. Any more surfaces and Fisk argues you’re apt to visually confuse the brain. “The more you can use the same basic materials in different combinations in different places, you can really make a home seem like it was born that way,” she adds. “I think that’s one of the biggest differences between doing one larger project versus a lot of small projects over time. When you tackle it all at once, you can think about everything as a whole together.”