Art Lovers Are Flocking to Cabo, And Here’s Why

The coastal city of San Jose del Cabo is on the brink of a major revival, and we've got the scoop on everything you need to know. 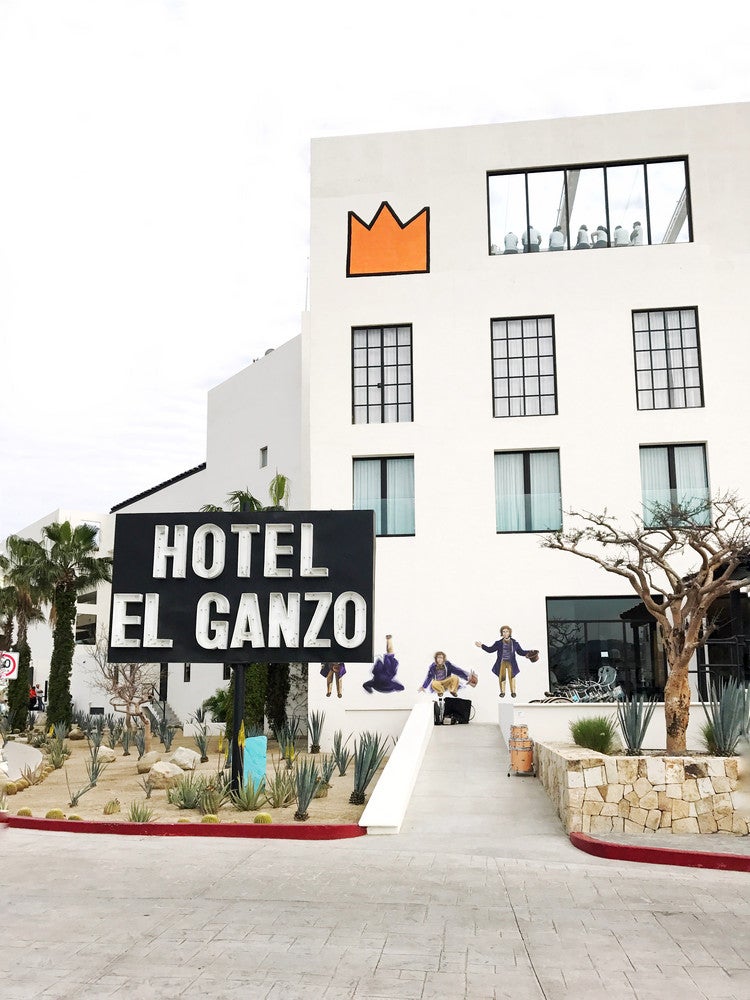 San Jose del Cabo is up-and-coming in the most literal sense of the phrase. The town sits on the southern tip of the Baja California peninsula. The landscape is mountainous and coastal, peering through a series of peaks and valleys surrounded by a cacti-filled desert that stretches farther out than the eye can see. The drive down from San Jose International Airport is an ironically short one.

The coast of San Jose del Cabo boasts a series of hotels dotting the strip, most only mid-development. The completed establishments provide a preliminary glimpse as to what the hotels will come to resemble once they’ve come to fruition. Each managing to out-do the other with impressive architectural details. Innovative design is at the forefront of these resorts.

Los Cabos has traditionally been synonymous with its party-friendly atmosphere. Come spring, it transforms into the West Coast version of Cancun. Suffice it to say, most would be hard-pressed to see Cabo as anything more than a party-seeking destination. But for as seemingly debaucherous as Cabo San Lucas can get, its counterpart, San Jose del Cabo, is as calm and low key. So what sets these wildly contrasting destinations apart? Their similarities about begin and end with the shared name of Cabo – or Cape – and geographical closeness. While the streets of Cabo San Lucas come loaded with your typical slew of happy hour bars and modern shops, San Jose del Cabo embraces its historic past with cobblestone streets that bear establishments of an era past.

Freshly renovated shops and restaurants stand far and few between the historic structures of the town, most featuring a crumbled facade or fading exterior paint. Intentional or not, the decorative elements of San Jose del Cabo are well-thought-out and refreshingly complementary to the surround. Bougainvillea creep up from within the private gardens of the city’s homes and hotels, delightfully spilling onto the neighboring terrain. The quaint streets come decked with Mexico’s signature papel picado banners – paper art featuring elaborate designs – tributing the culture’s fondness for folk art. Galleries dot the streets, along with a handful of craft breweries and trendy restaurants. Artisanal shops offer everything from farm-fresh produce and handmade soaps to domestically-imported coffee and ceramics filled with dried florals.

The Market by Flora Farms This charming shop features an array of goods, mostly sourced from the nearby Flora Farms, along with items imported from various cities in Mexico.

San Jose del Cabo’s revival could not come at a better time. Los Cabos is quickly becoming an art-centric destination with a

that is flourishing thanks to an influx of contemporary artists who migrate up, most splitting their time between San Jose del Cabo and the art-hub of Mexico City. One such is the

Situated on the northern tip of San Jose del Cabo, the gallery displays Arnold’s current works. It also doubles as a front for Arnold’s home and studio, conveniently located behind a set of double doors at the end of the open gallery. The space is nothing short of breathtaking – whitewashed with the occasional pops of color and plenty of local greens. It’s an oasis of sorts, teetering on the edge of an artistic escape.

Just a short walk around the block, in the center of town, we come upon the Patricia Mendoza Art Gallery. Patricia Mendoza is known as the go-to dealer for contemporary art. On this occasion, she’s doubles as our tour guide, showcasing the must-see exhibits in the town. During the months between November and June, the town hosts a weekly Art Walk, offering residents and tourists the opportunity to view new exhibits and flavor the local cuisine of the neighboring restaurants.

A dreamy moment in the home studio of Frank Arnold.

The lodging in town is no exception to the art-focused theme of Cabo. Go beyond the stretch of party-centric resorts and you’ll be pleasantly surprised to find a handful of hidden destinations that challenge all preconceived notions of what Cabo has come to be known for. Emulating the artistic resurgence of the town, creatively driven resorts have flourished, each imparting the desert landscape with its unique touch.

is one such establishment. The beachfront hotel comes with views of the Sea of Cortez as well as of the Puerto Los Cabos marina and even features a private beach, only a short ride away. El Ganzo’s claim to fame lies within a devotion to the arts. The hotel itself resembles something of a blank canvas, featuring a strategically whitewashed interior and exterior. Currently, the walls bear only a handful of installations – each lending a vibrant and eye-catching element to the overall scheme. An in-house recording studio doubles as a hub for emerging artists, who can be found performing live on the stage that’s conveniently situated on the hotel’s rooftop, a true musical venue. The recording studio is accessible via a trap door in the foyer, appropriately dubbed ““The Underground.”

El Ganzo’s “Artists in Residency” program cultivates the up-and-coming talents in the world of contemporary art. The program invites artists to reside within the hotel in exchange for a custom work of art that will live among the confines of the lodging.

A graphic illustration in one of El Ganzo’s 70 rooms.

A scenic 10 minute drive away, we come to the new

The architectural features of Mar Adentro are stunning enough to take one’s breath away. Set against the crashing waves of the Pacific, the contemporary resort is composed of a series of structures set around a set of reflecting pools, encompassing the “Birds Nest” – a lounge-meets-bar that manages to provide the ideal escape from the heat and sun. The hotel’s concept comes from Miguel ángel Aragonésm whose aim was to construct a place that would complement the surrounding environment. He describes Mar Adentro as “an attempt to understand the contrasts between light in interiors and exteriors.”

Since its conception in 2013, the Gala has managed to attract the attention of dance lovers and performers from across the globe, culminating in a truly unique showcase in San Jose del Cabo. It recently celebrated its 5-year anniversary with a spectacular show held on a custom-built stage atop the reflecting pools of Mar Adentro. Psst! You’re in luck – the show will be returning to the same stage in 2018. Get the details here!

Our tour of the Baja coast leads us to the Grand Velas Los Cabos. It only recently opened, in December 2016, and everything about the hotel alludes to the design-centric craze of the region. The establishment’s bold architectural details begin at the entrance, hinting at the decorative prowess of what will come ahead. Grand Velas itself is an all-inclusive resort, though one unlike any other. For starters, the hotel features eight restaurants, one of which comes with a Michelin star chef and an extensive wine collection. For as delectable as the cuisine is, the decor is even more impressive. The architects of the hotel spared no expense when it came to the decor, affording the designers carte blanche when it came to setting a budget. The motivation was to allow each designer to create the restaurant of their dreams, without the worry of financial constraints. True to form, the results did not disappoint. While the decorative schemes of the eateries differ from one another, each one manages to impart a unique detail to the grounds. Culinary variety comes aplenty.

Blues and greens make quite the statement at Grand Vela’s Velas 10.

San Jose del Cabo has yet to reach its peek level of tourism. For now, it’s a relatively well-kept secret, nestled within the Sierra de la Laguna mountains and Gulf of California, standing at the cusp of an explorative boom thanks to the artistic boost the city has come to see. Consider this a must on your travel bucket list.