The stores in Paris and LA are so pretty you’ll want to move in. 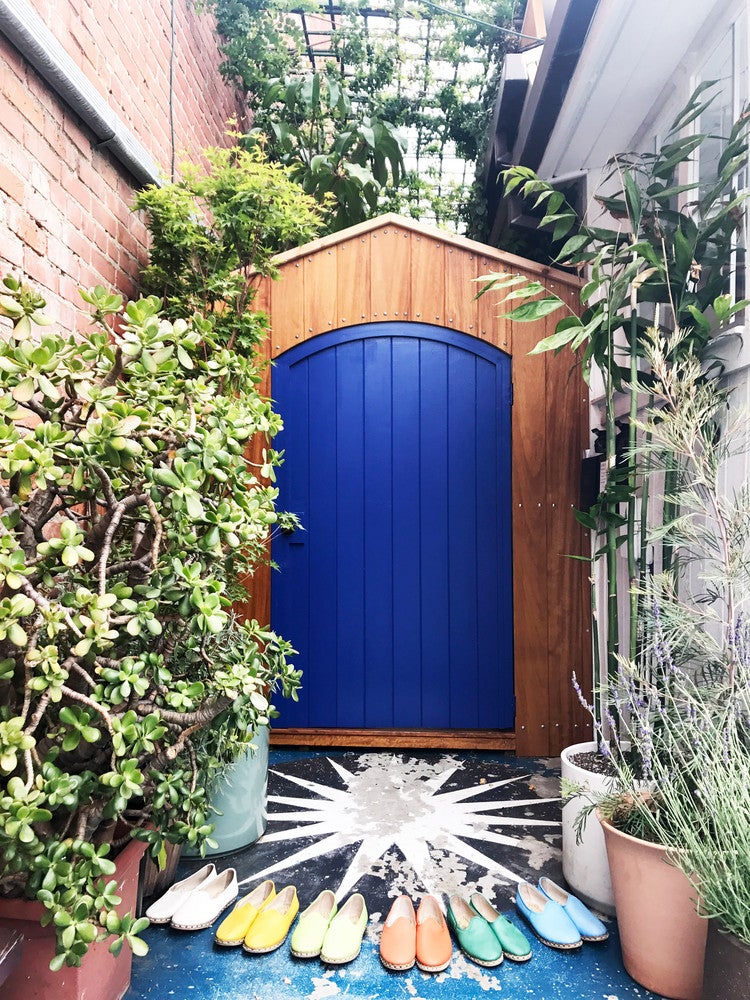 Our favorite shoe brand is growing: Just six months after the opening of the Dallas shop, Sabah Shoes has expanded with two additional spaces, a permanent spot in Los Angeles and a pop-up in Paris.

Through a blue portal nestled on prominent block along Abbott Kinney Boulevard, lives Sabah Venice. In less than two weeks, entrepreneur and renaissance man Mickey Ashmore and his team transformed a simple brick lined passageway with a small structure into his West Coast outpost.

“This was our biggest project yet, as it truly involved a full transformation of the space and also the most fun—it was a desolate alley way with no life to it” says Ashmore. “I received a call about an open space, flew to LA and signed the lease the next day.”

The resulting space is a colorful respite from the busy street that transports customers can be into the relaxed, eccentric world of

In what seems like a mastery of small spaces, Sabah’s Venice location consists only of the alleyway and a 64-square-foot store, yet packs just as big of a punch as Sabah’s other permanent outposts in New York City and Dallas. Shelves of Sabah’s leather slippers line the small space, with an assortment of curated products in the mix, including a new fragrance and goods from RTH Shop. At the push of a button the entire place turns into a disco.

“We wanted to delight our customers and give them an elevated experience that’s positive and thoughtful,” says Ashmore. Along the brick pathway are small seats and vignettes inviting guests to stay and relax, and overhead is a voluminous garden trellis that frames the space, hanging 20 feet above.

“The idea is to come and stay a while,” Ashmore notes. This community-centered focus is at the root of everything Sabah does; production is based in Turkey, where the idea for the brand was born, and Ashmore employs only locals and Syrian refugees.

Less than a week after returning from setting up his LA space, Ashmore headed to Paris In a space at the Palais Royale, opened June 1 and running for three weeks through June 18. Furnished in a similar manner to his other spaces, Sabah’s Parisian pop up is not one to miss.

Located in 17th century shopping space, the Parisian pop-up serves as Sabah’s longest European run. Ashmore connected with a vintage furniture dealer to outfit the space. The shop opens to a gorgeous lawn where he plans to host events for the next two weeks.

advertisement
The Paris shop is located in the the inner arcade of the Jardin du Palais-Royal until June 24. It’s open daily from 11am to 7pm.
Psst! Don’t miss out on the limited edition collection which launched this month, featuring a collaboration between leather textile brand Avo, founder Brit Kleinman and Ashmore. The duo worked together to incorporate Avo’s rich painted leathers into wearable art, which you can shop here!