The design feature grows with baby all the way to teen. 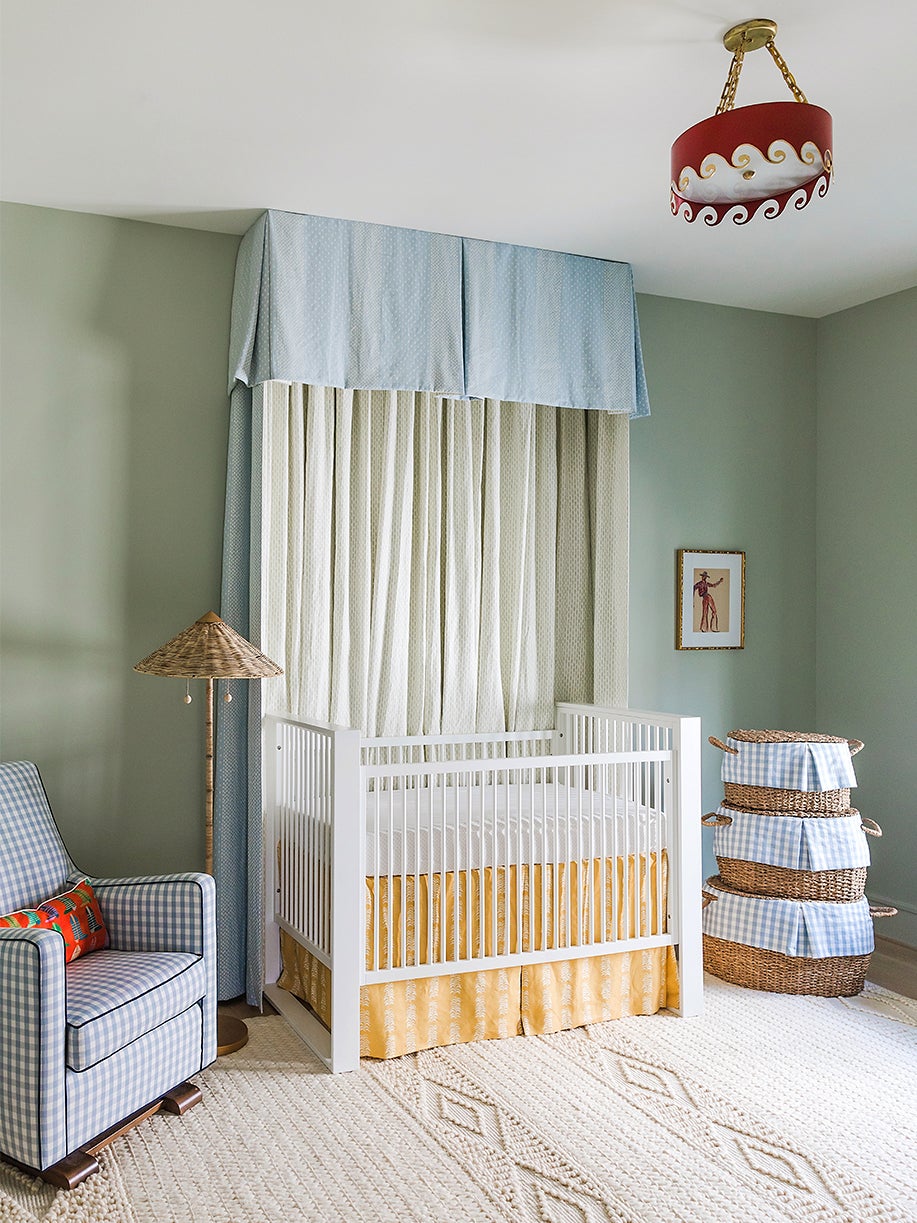 When it came to creating a new nursery for a returning client, Houston-based designer Katie Davis turned to her textile sourcebook and rolled out the whole nine yards. Having previously worked alongside the family on spaces for their two other children—5-year-old Pierce and 3-year-old Teddy—she already had a good understanding of their style and preferences. Which was key for the project to be pulled off in record time: Other than painting the walls in advance, the entire transformation happened while the owners were at the hospital for their third child’s planned delivery. “We had a second big surprise to look forward to, coming home and seeing the nursery for the first time!” says mom Ashley Yates. Here’s how Davis reimagined the room from a blank canvas into a warm, layered nest ready to welcome baby.

A Canopy Can Cover Multiple Ages

“I want a kid’s room to grow with the child,” says Davis. The canopy she installed works twofold: as a way to add visual interest and height to a wall that otherwise felt bare and bland, and as a clever feature that can evolve over time. The shallow frame currently outlines the crib, placed lengthwise, but can accommodate a toddler-size bed and up to a queen mattress in the future. As for addressing the more immediate needs: “We reinforced it to the ceiling and bolted it to the trellises,” explains the designer. “We expect the baby is going to pull on it eventually.”

“Ashley loves color,” the designer explains. “The one thing she told me was, ‘Anything but beige.’” Having that request and Yates’s full trust, Davis’s team operated independently, revealing nary a fabric sample so as to keep the project a surprise until the big reveal. They pulled the palette back to a series of lighter shades (a sophisticated spin on primaries) to not overwhelm the smaller space—but still bring in some character. Against a soothing green backdrop on the walls, touches of sunflower yellow and poppy red in the flush-mount fixture and throw pillow make the room feel fun yet versatile enough to flip into a guest bedroom, should the two boys bunk in together someday. To blend in with the rest of the home, pale blue via the canopy, drapes, and glider creates another subtle note. “I treat it as a neutral because it goes with just about everything,” says Davis. 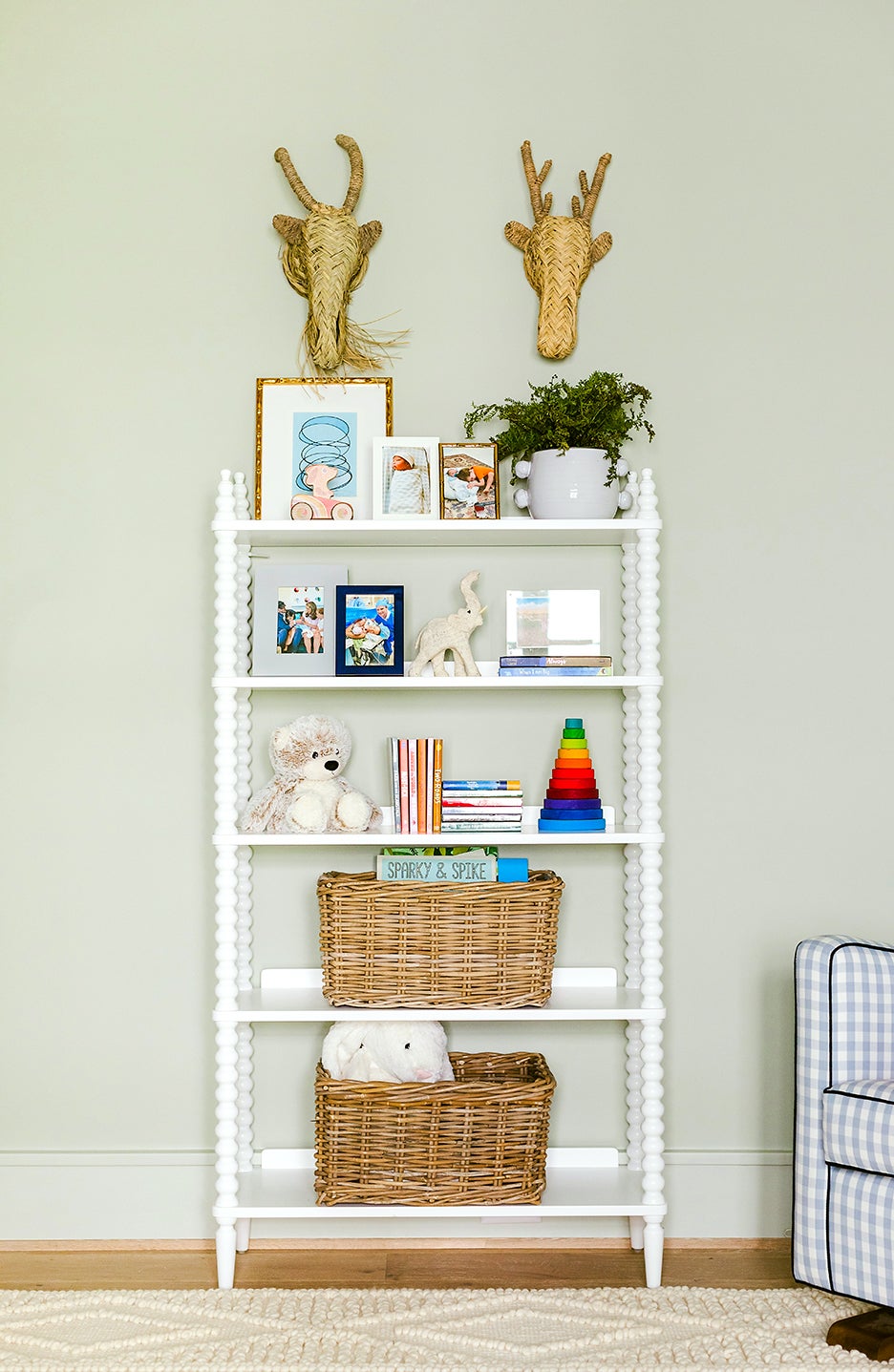 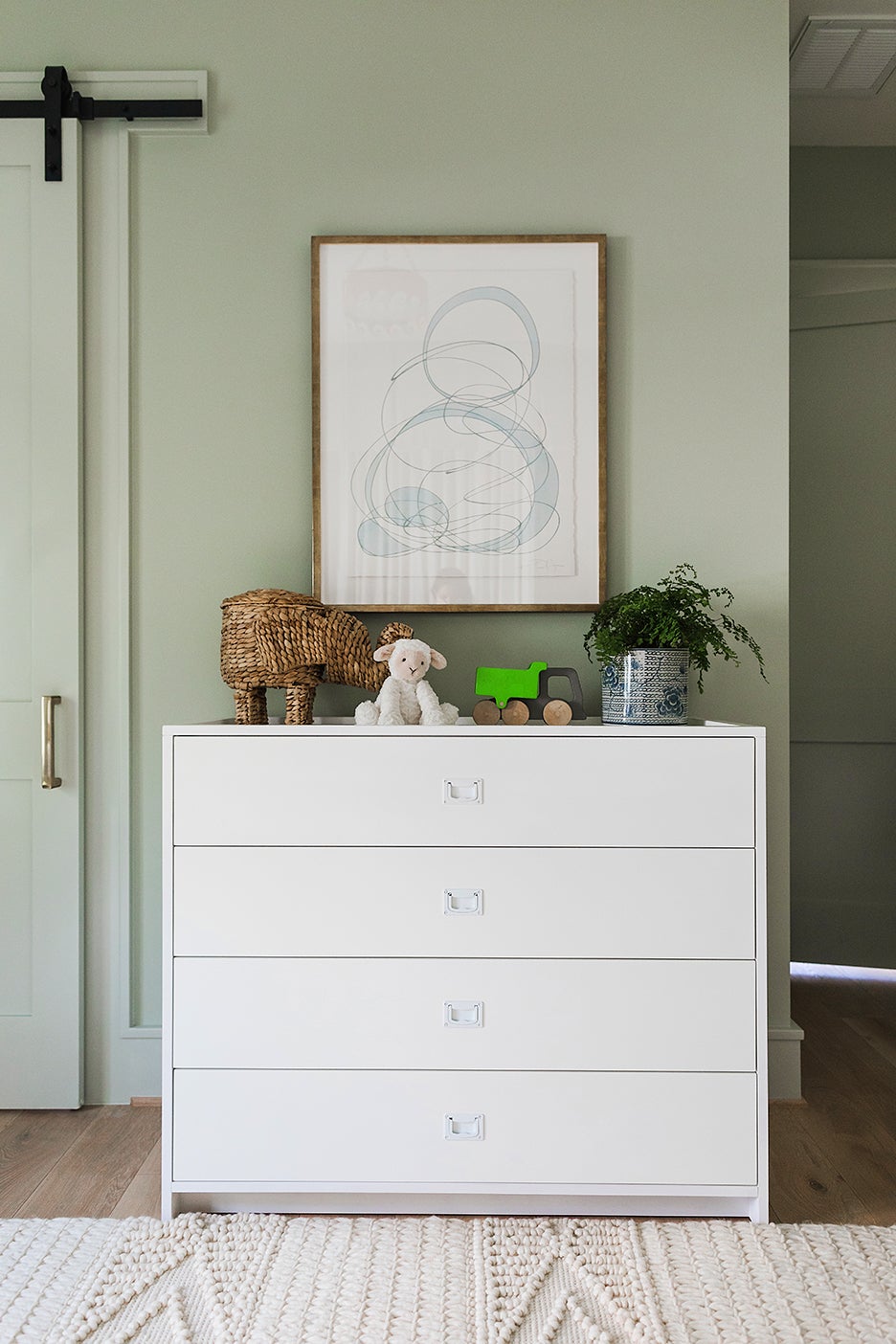 Rather than bring in standard children’s furniture and decor, Davis found upholstery options that reimagined the Yateses’ favorite pieces for their newcomer to enjoy. “They already had the glider, but we spruced it up in a gingham pattern,” she notes. That same fabric makes an appearance lining a trio of stacking wicker baskets in the corner—a simple but impactful way to tie the room together. More storage pops up in the form of a custom-covered velvet bench that tames toy overflow and the bookshelf on the opposite wall, which holds baskets for separating books and more toys. And layering wicker and raffia into everything from the playful wall-mounted animal heads to a floor lamp adds texture with timeless appeal. “Anything woven I say yes to,” admits Davis. “He’s only 6 months old,” says Yates of her new arrival, “but I’m so happy to know that he has pieces that will continue to work for years to come.” And ultimately the tiniest client was always top of mind. “We tried to make it his,” says Davis.