This $10 Trick Gave A Nashville Nursery Its Dreamy Storybook Spin 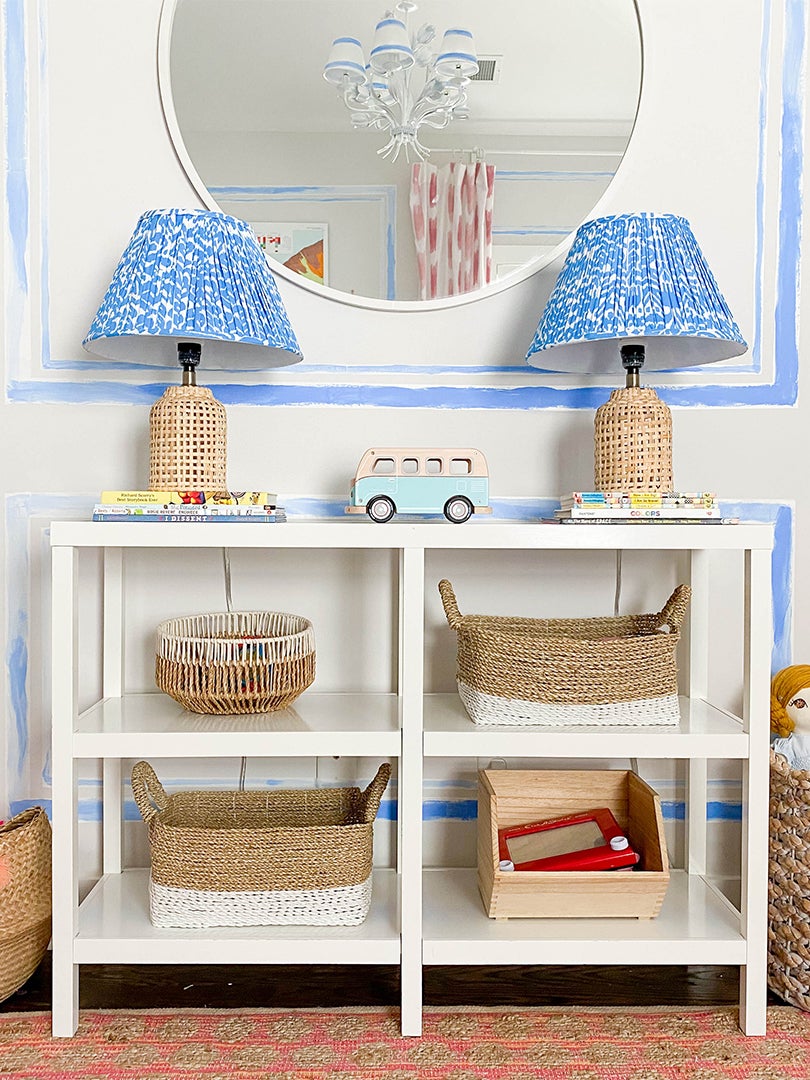 With only one window and minimal architectural interest, the nursery of designer Mary Kathryn Wells’s 2-year-old daughter, Mary Coco, was a perfectly square—and perfectly boring—box of a room. “It needed a sense of magic and pretend,” recalls Wells. So she called up her good friend artist Donna Crowe to come to her Nahsville home for one weekend and help her put up some molding—the faux kind with paint.

The inspiration to go with a trompe l’oeil effect was partially inspired by Fromental, a collection of the century-old work of Christian Bérard for the Institut Guerlain in Paris, and a weekend trip Wells took to the Hotel Peter + Paul in New Orleans. Crowe started out by painting a tropical, palm tree–dotted scene on a piece of unstretched canvas (a nod to Mary Coco’s nickname, Coconut). “That’s when she suggested the paneling,” says Wells. They took the leftover shades of blue that Crowe had used for the mural and covered the rest of the room in outlines of squares and rectangles. The best part? The treatment is done completely on strips of tape (the rolls are only $10 each), so the DIY is removable. Just peel it off when you tire of it! Ahead, Wells reveals how they pulled off the optical illusion.

Step 1: Select a Gradient of Paints

Your faux paneling is likely to look more cohesive and intentional if you start by picking one hue (in Mary Coco’s room the light blue stemmed from the mural and lampshades) and then buy two to three shades of that color. “Or you can lighten the primary color with lots of white paint,” Wells points out. The duo used a very pale blue, a sky hue, and a cerulean tone.

While the painting part doesn’t require a ton of precision (more on that in a bit), Wells and Crowe put effort into getting their simple rectangles even with one another, that way it looked like an architect came in. “This step is in many ways the toughest and requires the most mental energy,” says Wells.

In order to figure out the placement of the tape strips, Crowe drew on top of photos of the room to get a rough idea of the layout, taking note of switch plates and doors as well as furniture. If you’re doing panels with insets (a second rectangle inside the outer one), the pair recommends starting with the largest box first. Also, avoid cutting strips that are longer than 3 feet. “Longer pieces lead to uneven and unleveled lines, as well as tape stuck to itself and to you—a hot mess,” says Wells, laughing. For long panels, simply connect them until you get the length you’re after.

To accurately reflect how the light and shadows would look on real paneling, Crowe and Wells used this image as a guide for where to place the various shades. Roughly the pale hue goes up in the top left corner and then fades into the medium tone around the edges, and then the darkest color goes mostly on the lower right-hand side of the silhouette. Just be sure to blend the colors together a bit where they meet.

Step 4: Get a Crisp Border

Because you are painting onto tape and not the walls, the process is super-forgiving. But if you do happen to color outside the edges of the tape, have some paper wipes or a Magic Eraser on hand to clean it up. “We also covered a table with kraft paper, so we had an easy place to set down our paint and other supplies without causing a mess,” says Wells.

Step 5: Don’t Stop at the Walls

After seeing how easy the paint-tape hack was in Mary Coco’s space, Wells decided to try something similar on the dresser in her and her husband’s bedroom. (The IKEA chest they’d owned for more than a decade, ever since they moved into their first apartment, was in dire need of an update.) This time around she played with triangles, placing the shapes on the top front of the dresser and on the sides. Compared to the 20 hours it took to do Mary Coco’s space, this DIY was a total breeze (she finished in under two hours). Fake it till you make it!