This Cottage’s Second Chapter Began, Fittingly, With a Second-Story Addition

A spiral staircase leads to the new floor. 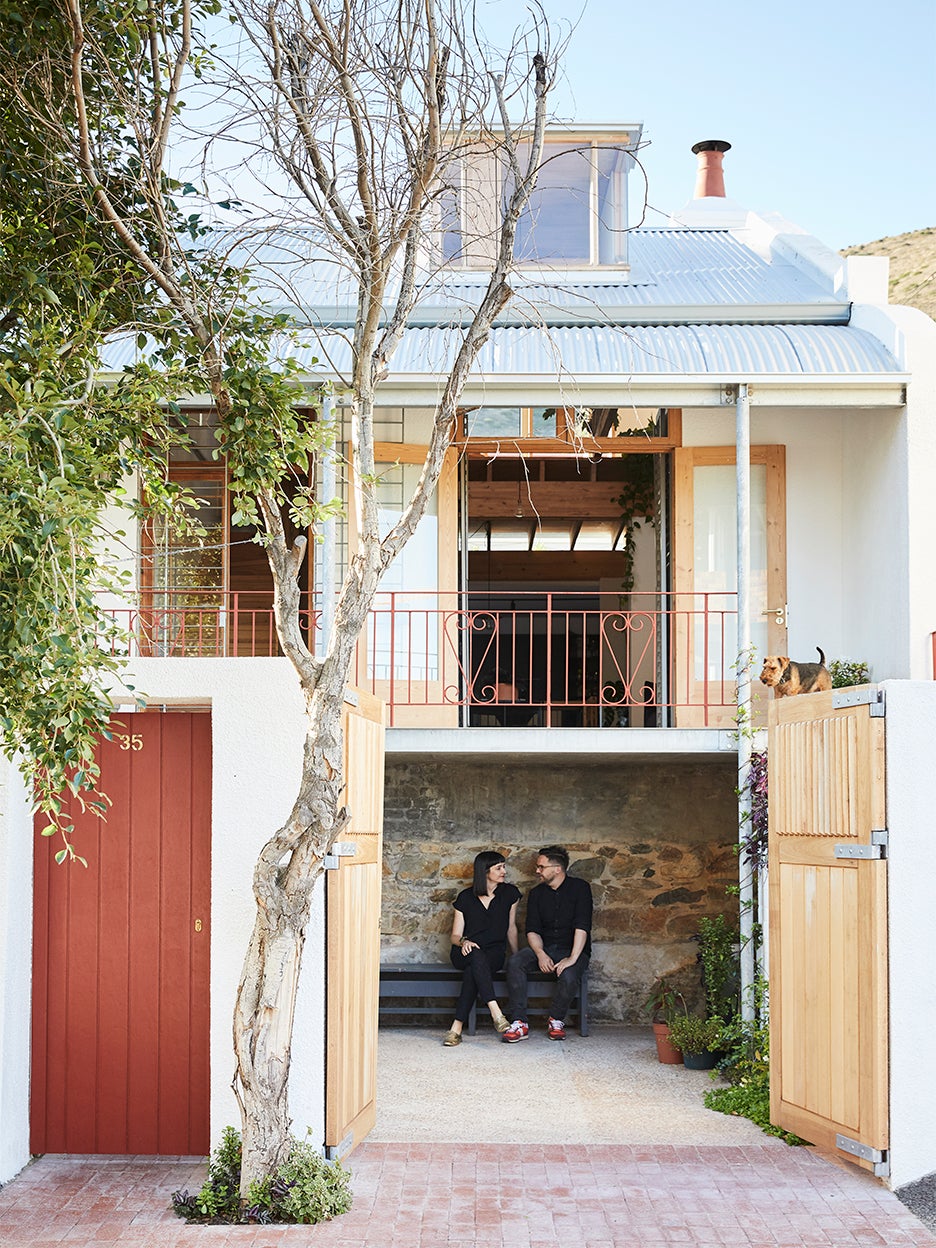 When a massive water shortage coincided with Liani and Jan Douglas’s seven-month-long renovation, they began to rethink the roof. In an effort to reduce their dependence on the municipal supply, the South Africa–based architects designed a new structure for their two-bedroom Victorian cottage that collects and distributes rainwater to the washing machine, dishwasher, and toilets inside. “Living in the house for six or so years gave us a much better idea of its potential,” says Liani. “We made the decision to do what’s right for the building.”

The system, which also incorporates solar power for hot water, is one of many likely reasons their restoration won an award from the Cape Institute for Architecture in 2019, with the judging panel concluding the couple turned an “insular row house into a new delight.” A few other details worth celebrating: the green Verde Guatemala marble counters and the small, steel spiral at the top of the stairs. The curved structure was technically a solution for bringing the tall staircase up to code (it had to have some sort of turn in it), but now, just like the framed prints that lean against its upcycled wall, it’s more of an art piece. “The folded sheet metal has a sculptural quality to it,” says Liani. “It urges you to slow down.”

While the space was in dire need of a facelift due to careless additions and patch ups that took place decades prior, the architects wanted to retain its 1895 soul. So, they salvaged as many materials as possible, like the old ceiling beams (used to build a divider that encloses the staircase) and the original fireplace (now painted matte black).

The couple saved the old Oregon pinewood floors where they could and sanded and coated them with a water-based sealant. “Reusing and updating these features made the space feel, at once, contemporary and timeless,” says Liani.

Adding dormers changed everything—it meant the couple could have a functional second floor with enough clearance for a primary bedroom and a small library. It also allowed the Douglases to effectively double the ceiling height of the living room and expose the existing trusses. The open loft at the top of the stairs (there’s a metal handrail for safety) offers a prime view of the gathering spot.

The only caveat to exposed beams is that they limit the places you can install overhead lighting. Swagging the cord from its electrical box so it’s centered over a piece of furniture is a clever workaround. “We also enjoy the drama of the swooping line,” says Liani, referring to the minimalist dining room pendant. “It reminds us of Jean Prouvé’s 1950s Potence wall lamp.”

In the main bedroom, a smart track system provides light to both sides of the space. The fixture is suspended from the exposed joists, so it blends into the architecture rather than distracts from it. On the other side of the room where the sloped dormer juts out, the couple added a slatted plywood bench to take advantage of all the natural light flooding into the room.

A rebellious departure from the wood-and-brick palette, the opulent green marble kitchen island, which Liani says is eye-catching “without being too flashy,” lends a major dose of color to the house. The refrigerator is hidden behind matte black cupboards with super-slim handles inspired by one of the couple’s credenza designs (their studio, Douglas & Company, also produces custom furniture), so all focus is on the natural stone.

The covered front porch (also called a stoep) is brand-new, but the architects designed it to closely resemble the old setup by incorporating a typical wrought iron railing. Out back, the walls of the courtyard are painted in a cheery hue dubbed “Orange You Glad.” When it comes to giving this house a new lease on life, we have a hunch the Douglases are pretty happy they did.

Introducing Domino’s new podcast, Design Time, where we explore spaces with meaning. Each week, join editor-in-chief Jessica Romm Perez along with talented creatives and designers from our community to explore how to create a home that tells your story. Listen now and subscribe for new episodes on Thursdays.