A 19th Century Brooklyn Brownstone Gets a Modern Revival

Peek inside the charming abode and see how a family of four made it their own. 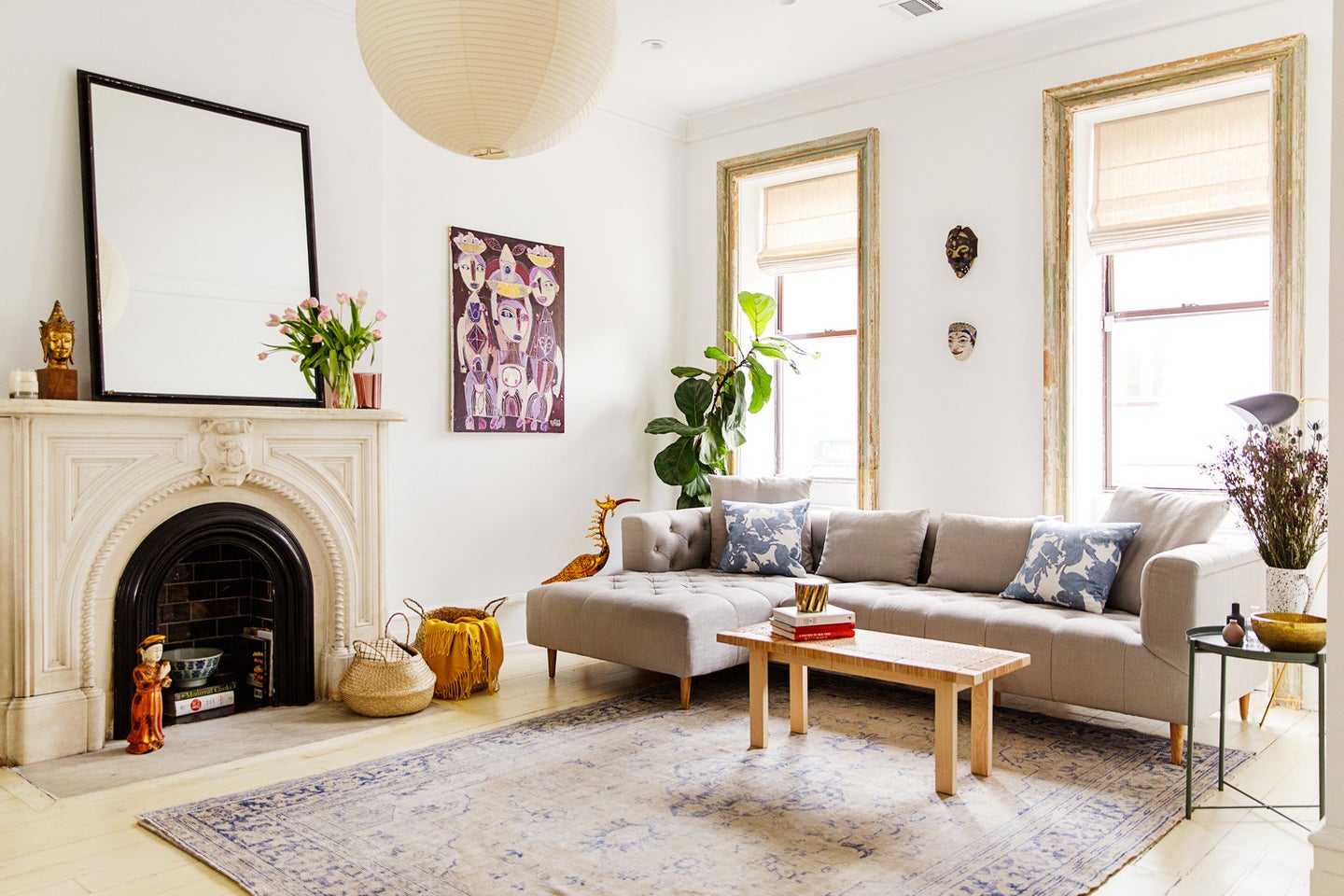 For Veronique Nguyen and her husband Ben, one of the more exciting aspects of moving into their new home was being a part of the neighborhood that came with it. And even though it was only a few miles away from their old apartment, it felt like an entirely new venture. Having lived in Brooklyn for a little over 8 years, the family of four was drawn to the new location by its strong sense of community—oh, and the charming bakery from the 1920s, which was conveniently located just around the corner.

The new home gave the couple the opportunity to create a space that reflected their style and needs. Built in the 1890s, it came with plenty of character and history—in fact, Veronique and Ben would only be the third family to call it home.

On the main level, the original flooring was still intact, proving the quality of the design. “Those floors are over 120-years-old and don’t creak at all!  We sanded them down and bleached them but they are definitely imperfect, which I love,” notes Nguyen.

As one can imagine, preserving the original elements of such a historic space can be quite a challenge, especially when that involves implementing a vast array of modern updates. That said, the couple still maintained a good deal of the existing features of the home: the beautiful marble mantels, the staircase, and a skylight were all kept intact.

“One of the design elements I love the most about our house is the salvaged moldings around the windows and opening in our parlor level,” says Nguyen of the detailing which was stripped down and left unpainted to artfully showcase the remnants of the existing layers of paint.

The fresh aesthetic of the home is one that skews towards the contemporary with an eclectic layer for an added point of interest and authenticity. “I like our home to feel open and uncluttered but also feel warm,” she says. “We love layering with a mix of styles, stories, and some unexpected touches.” Details such as the aforementioned definitely don’t go unnoticed. A curated scope of artwork and furnishings come passed down from family and friends and with each, a story to go along with.

Look through and you’ll notice just that. The blissfully blurred line between the old and new, each thoughtfully factored in a manner of effortless harmony. Nguyen, who is drawn to clean and modern spaces, loved the idea of an open area with a neutrally-charged palette. Clutter is a major no-no—in its place, storied artifacts sourced from friends and family or travels abroad are readily kept in rotation, thoughtfully layered into various nooks and crannies.

When pressed for her most favorite spot in the home, the kitchen was the clear-cut winner. “I love our kitchen. I love to cook and it’s definitely the space we spend the most time in,” says Nguyen of the bright and streamlined area.

The couple opened up the rear wall to provide a distinct line of vision to the deck and courtyard, allowing a flood of light to feed into the kitchen. Another change came by way of creating an open-plan space. “We enlarged the openings on the floor allowing the living room to flow through to the dining area and kitchen,” she notes. “The kids can be playing in the living room or on the deck while we’re cooking in the kitchen.”

As the family spends the majority of their time in the kitchen, the goal was to create a space that was functional yet comfortable. Considering the fact that the kitchen, dining area, and living room all embody the same general area, keeping the color scheme light was also crucial to the pair. “We wanted it to all flow together,” says Nguyen, “I’ve also always been a fan of white, bright open spaces!”

The marble, designated for the countertops and kitchen island, was sourced from Turkey, one that Nguyen immediately fell in love with at first sight. To complement the intricacies of the stone, the couple opted for a pared-down approach to the backsplash, which came in the form of the mini Zellige tiles. “I love their hand-cut, organic feel which warms up the rest of the kitchen which is pretty modern,” Nguyen says of its earthy finish. Brass hardware was then installed to add an element of warmth to the room.

The home office is Nguyen’s light-filled sanctuary and one from which she operates her brand Les Gamins, a clothing company focused on providing everyday essentials for toddlers and babies. Located right off of the family room, a set of large folding doors separate the two spaces, establishing boundaries for Nguyen when she’s working from home—although, they are, more often than not, left open.

While storage is an important component of any home office, it’s especially crucial for Nguyen, who relies on ample shelf space to store product. She opted for streamlined options from Ikea (both the desks and shelves are sourced from the Swedish retailer) and paired them with a long line of pinboards for swatches, the kids’ artwork, and various other trinkets for inspiration.

The playroom, which doubles as a guest room, bears the same minimalist approach to design as the rest of the home, yet it certainly doesn’t hold back on either color or style. A stack of books, which never made it to the already-packed built-in shelves invite a less-structured detail to the room, one that exudes an effortlessly cool aesthetic.

The kids’ bedroom is found on their own little floor, providing them with a mini personal area. “The rooms on the kids’ floor open up to a playroom and we designed it so that each room has oversized pocket doors, rather than regular doors so that it could feel like one big playroom when the doors are open,” says Nguyen.

The primary focus of the design was to establish a space that could evolve with the kids as they grew—a space that was playful yet not too childish and one that wasn’t necessarily confined to typical gender norms. The vintage “Building a Rainbow” poster in her son Zack’s room is one from the ‘70s, passed down from Ben, who had it in his childhood bedroom.

The Otomi embroidery in Margaux’s room was sourced in Mexico City where Nguyen was traveling while pregnant with her. Now, it hangs above the crib in a delicate frame that complements the surrounding furnishings and decorative accents.

Although the entire process of upgrading and renovating the home was an undeniably exhausting one, the duo was more than thrilled to have the chance to handpick every little detail—right down to the doorknobs—which made the end result all the more perfect and personal.