How to Create a Cool Office Space in Under Four Weeks

An activewear brand CEO taps Homepolish to redesign its headquarters. 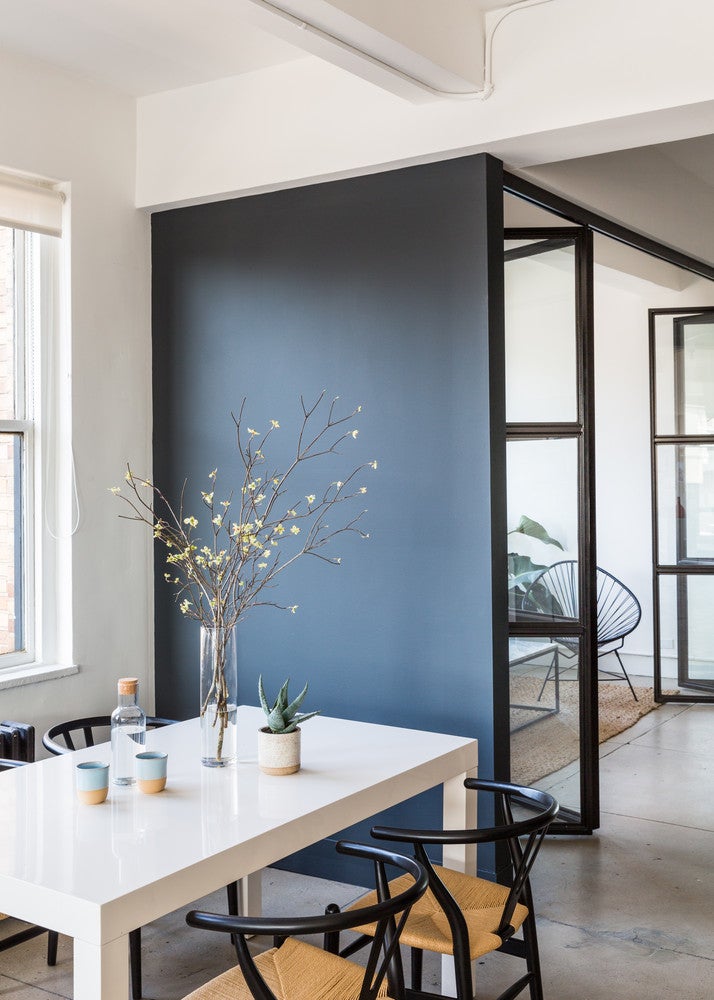 Alala founder Denise Lee wanted a minimal, clean aesthetic for her athleisure brand’s new 2,000-square-foot loft showroom in SoHo. Located in a highrise with stunning views of the Empire State Building, Williamsburg Bridge, One World Trade Center, and the East River, the space was light-filled and spacious.

The issue? It was a blank space that had to be reinvented in only four weeks (the Alala office was relocating from another floor in the same building and had a hard deadline to move out of the old space).

“Denise from Alala brought me onto the project a couple of weeks before they had to move into the space, which means we had to work quickly to finalize the layout, complete construction, and make the space functional enough for them to work in,” says designer Tina Rich from Homepolish.

In that one month, the team was able to build out a kitchen, storage room, showroom, and meeting room. The brand wanted a space that was neutral with touches of wood and greenery, slightly industrial, and laid-back but sophisticated so Rich painted several walls charcoal (Farrow & Ball’s Railings) for a bit of contrast against the white space. Natural wood, jute, marble, black metal, brass, and leather textures softened up the space’s concrete floors—as did plants.

Staying true to the brand’s clean and streamlined aesthetic in its clothes was also key. “We really tried to embody the brand in their space by pulling colors and textures from their line,” says Rich. To that end, she used a palette of mostly white and neutrals with touches of graphic black and brass.

“When we got the space, it was just one big open room,” says Lee, Alala’s founder. “We were challenged to separate it into all the areas we have now: a design studio, a storage space, a conference room, a kitchen, a showroom, and enough work space for everyone.” The practical solution? Separating the showroom and meeting room with functional metal accordion doors that can be fully opened, creating one large space for events. “This was a huge undertaking,” says Lee. “We had the doors custom made in Minnesota. They totally make the space and are just gorgeous.”

What budget-friendly design hacks did Tina use in the space? She made 9-foot-tall linen covered bulletin boards out of old foam core boards that were lying around. “We made DIY cork boards wrapped in linen (the same linen we used for the fitting room) in the design studio so the team could pin up their inspiration images, upcoming collections, and fabric swatches,” says Rich.

The cohesive design of the space has been a hit with buyers and press so far. “Tina created a gorgeous space that highlights the line so perfectly,” says Lee. “The clothes look beautiful hanging together. In fact, we just had our best sales season ever and our first one in the new space!”