Design | From Home to Haven | Home As We Know It | Interviews

Relics of the women who came before me. 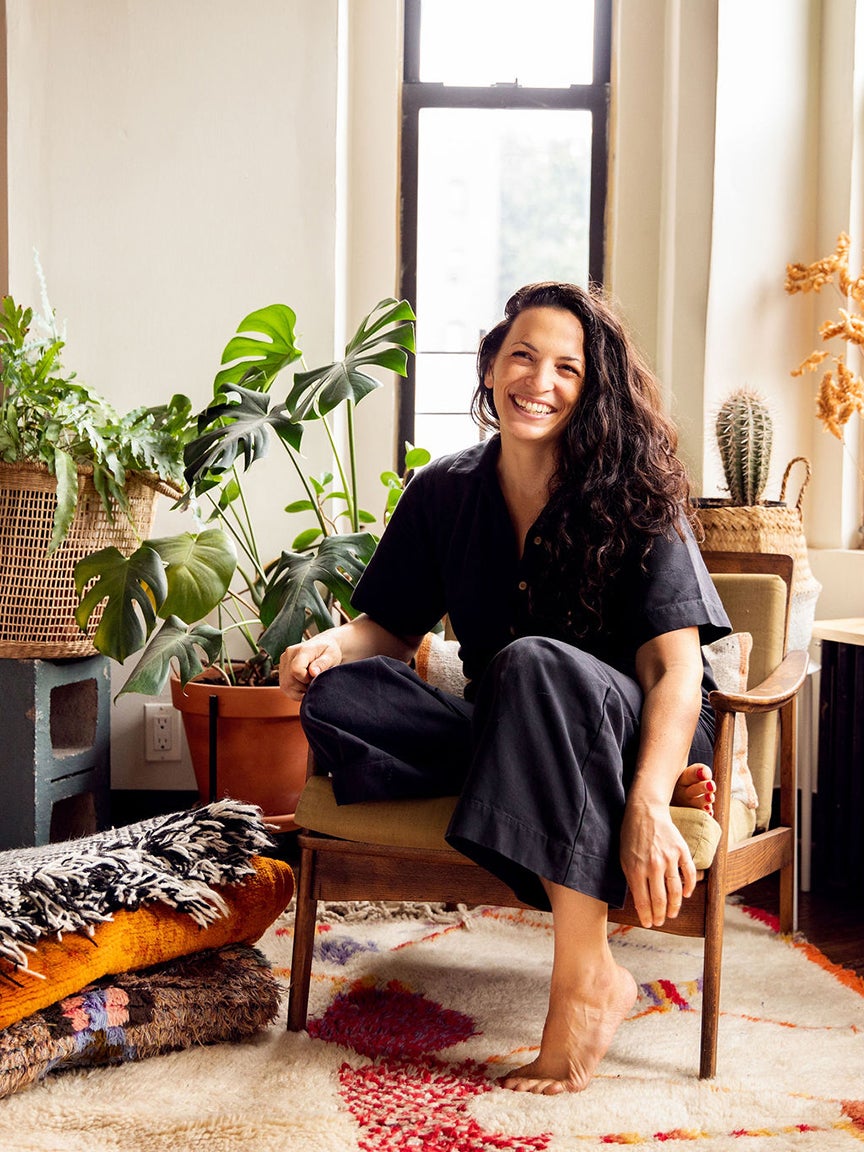 It wasn’t until Mallory Solomon’s brother put her in a cab, along with six suitcases, that it all started to sink in: She was going to Morocco—and this time she was staying there. For the past two years, the Los Angeles native, who founded direct-to-consumer rug company Salam Hello in 2019, had been splitting her time evenly between Brooklyn, where she kept a spacious apartment in Bedford-Stuyvesant, and Marrakech, where, five hours southeast of the city, deep in the Atlas Mountains, her naturally dyed, handwoven rugs are produced. In September, after seven months of quarantine, Solomon made the decision to move to Morocco full-time.

“I Marie Kondo’d like I’ve never done before,” says Solomon, laughing. In order to make a truly fresh start (and partly because shipping costs were crazy high), Solomon sold all of the furniture in her Brooklyn apartment. Only a handful of items made the journey across the Atlantic. “I brought things I knew would allow me to feel settled in,” she recalls. The necessities spanned clothing, Le Creuset cookware, her sharpest knives, and palo santo. Then there are the relics of the women who came before her or, as Solomon calls them, her lucky charms.

As she unpacked these small treasures—a hand mirror that belonged to her grandmother, a tray she bought while vintage shopping with her mom, photographs of other important figures in her life—a sense of relaxation came over her. “I grew up knowing that I could be whatever I wanted and, with reflection, I realize that came from watching the women before me do what they wanted and not having anything stop them,” she says. “While they didn’t necessarily live with that motto, they ensured that was instilled within me.”

Ahead, Solomon shares the significance behind these lucky charms and why, usually, it’s the littlest things that make a house a home.

The Bakelite mirror belonged to my grandmother, Mom-Mom, who passed away in 2013 after battling dementia. She grew up during the Depression and never spent her money on ostentatious items. We believe the mirror is from a local pharmacy and that she just never threw it away because…well, it still worked.

One quirk of my baba’s (baba is a variation of the Yiddish term for grandmother) was never wanting her picture taken. For that reason, I always treasure pictures I find of her. The photograph of her and my great-aunt Getie that I carry around is my absolute favorite. Unaware of any camera, they are laughing and engaged with something going on outside the frame.

There are no real photos of my “Moroccan mom,” Khadija Bouziane, whom I met on my early trips here, prior to the one I have. It’s actually from her first-ever ID card. On the outside, she has a serious gaze, but she’s such a loving figure in my life.

My mom and I bought the tray during one of our many getaways. After becoming an “adult,” I try to always do things to treat her, realizing how much she sacrificed for me. I’ve taken her everywhere from Napa to Livingston Manor, New York.

My first memories are with my baba. We would play rounds of Go Fish while eating sour cream and onion Lay’s chips all the while her “show” (some soap opera) played in the background. When I would get tired, she would rub my back until I fell asleep. Until this day I remember the exact way her skin felt.

My baba and my great-aunt were a hilarious couple. They were full of quirks, and it always felt like they were up to something mischievous. Until the day they died, they never revealed their true ages to my dad.

From big moments to small, I like to think my baba helped guide my safety. I was in a serious car accident when I was 17. Driving to school one rainy morning, I ended up flipping my car. I went from the north to the south side of the street, tumbling through a row of trees ,and somehow I ended up walking out of the car without one scratch.

These elements reside in my bedroom and office. I wanted to make sure the two places I spend the majority of my time (especially in the current WFH times) felt like home and have parts of my past life in my present one. As these aren’t high-traffic areas for my guests, not many notice them, but when they do, they always ask who these people are and what they mean to me.

All these items remind me of the power and history of the women who allowed me to be where I am today; of why Salam Hello is so important to me. Our number-one priority is to work directly with local women artisans who design and create exquisite one-of-a-kind rugs all while maintaining price transparency. They and their families have been hand-weaving textiles since 600 B.C., passing the craft from generation to generation.

What we ultimately want is for our customers to have a truly deep connection with their rug beyond the look and feel of the product. Knowing the story behind the textile and the human on the other end of the supply chain, we believe, is a way to have a better world full of civility.

I plan to keep these items with me as I get older and pass their stories down to the next generation.