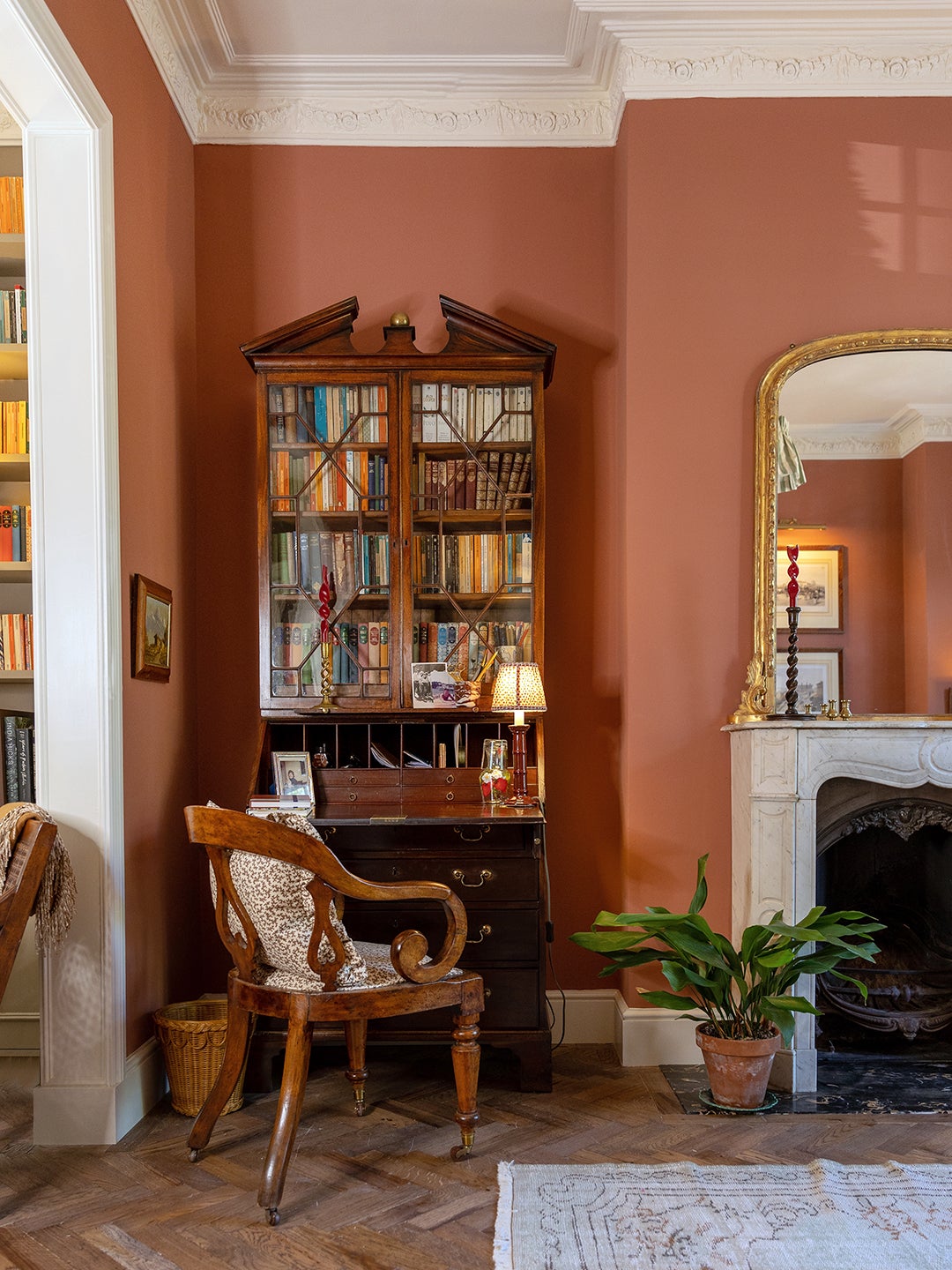 When the world went into lockdown, many city dwellers deserted their cramped apartments in search of greener pastures and square footage. Not Louise Roe. After only 18 months of countryside living, the TV presenter, fashion journalist, and founder of new home brand Sharland England (who had just renovated an 1819 Georgian farmhouse in bucolic Oxfordshire with her husband, TV director and producer Mackenzie Hunkin) had only one thought: returning to the hustle and bustle of a big metropolis. Without hesitation, the couple put their home on the market. “We sold our house really fast because people were leaving London like mad,” she remembers.

The craziness of a mid-pandemic real-estate market aside, Roe was house hunting with her 2-year-old daughter, Honor, in tow and a second baby on the way, all the while starting a business. In other words, a gut renovation was out of the question. The couple settled on a Victorian townhouse in southwest London, which, once you looked past the ’80s-fantastic avocado theme, only needed a little cosmetic love.

It had the right proportions, loads of original features—a mosaic-tiled entrance and ornate cornicing to name a few—and a lovely, mature garden filled with pear trees, apple trees, wisteria, and climbing roses (thanks to the previous owners, who were avid gardeners). “It felt like a really happy home,” says Roe. With the birth of her daughter Inès imminent, there was no time to spare.

Roe was determined to salvage the original floor in her last renovation, but not this time. “You end up with a lot of gaps or having to replace planks for various reasons,” she explains. “We were going around these old restoration yards and finding old wood, and it looked great in the end, but it was very time-consuming.” Instead she opted for tumbled oak, which gives an old parquet look but is actually brand-new and comes without the hassle (and with bonus underfoot heating).

In the kitchen, the couple kept the original cupboards, painted them a deep blue, and changed the hardware and countertops. The layout was begging for an island, so Roe had one made by British Standard to match the cabinets. “It kind of looks like it has always been there,” she remarks. To make the space feel less shiny and new, she found hand-painted Mexican tile for about 80 cents each in East London for the backsplash. “I wanted the grout to be terracotta rather than white, because it completely changes the feel,” she explains. Above the island, Roe repurposed an Alice Palmer pendant lamp from her old house and had a second one made to match.

This wasn’t the only item from Roe’s previous place that found a new life in the city. “We really weren’t in our last house much more than a year, so I brought most of the light fixtures, furniture, and even curtains with us,” she says. The latter required a few adjustments: “I had always thought you could only make drapes shorter, but our curtain-maker, Penny Morrison, sewed additional yards of fabric onto the bottom and you can hardly tell.” In a guest room, she repurposed another textile into blinds for a slanted window by adding brass poles on either end.

Because the living room furniture would also largely remain the same, Roe chose to replicate her old space’s paint color—going from Edward Bulmer’s Brick to a very similar but slightly darker hue called Sang de Boeuf from the same brand. “I absolutely adore it, especially at night with candlelight; it’s just a lovely, warm, rich color that’s so calming and great at cocktail hour,” she says.

Widening an archway between this space and the adjacent snug (the British equivalent of a den) to create an open feel was the only structural change made to the house, so the palettes had to flow together. Inspired by a brown and cornflower blue outfit she saw at a photo shoot months earlier, Roe landed on a navy sofa and Edward Bulmer’s Mummy—a deep tan—on the walls. “It’s nice when you look from one room into the other and the colors work together and complement each other in a tonal way,” she explains.

In the guest bathroom, a pair of shell-shaped brass sconces and botanical sketches Roe and Hunkin bought from a street vendor by the Seine in Paris inspired an aquatic garden theme. “Sometimes when you decorate a house, it’s actually the memories that things evoke that are most important,” says the entrepreneur. The climbing vine wallpaper from Living Quarters features snails and shells, while the Lisa Fine sink skirt, which is attached to the basin with simple Velcro—“You can remove it, wash it, put it back, hide all your junk underneath,” notes Roe—depicts tiny pieces of coral. Beadboard painted in a reddish purple–brown tone ties the two motifs together.

The family was still living in a rental around the corner and putting finishing touches on the house when Roe gave birth to Inès in May of last year. Floor-to-ceiling wardrobes were being installed and painted in the dressing room when a lightbulb went off in the mom-of-two’s mind: The doors were begging for a hand-painted detail and she knew exactly who to ask—decorative painter Amy Balfour. The only issue was that Balfour had also just given birth…to triplets!

“It was a big ask, but to my delight, she agreed,” says Roe. “She brought all three babies and her mom to babysit, and she was breastfeeding while painting. The builders were looking at us like ‘what the hell is going on in there,’ but it was all finished in two days. I will always say she’s superwoman because it was just so cool to watch.” 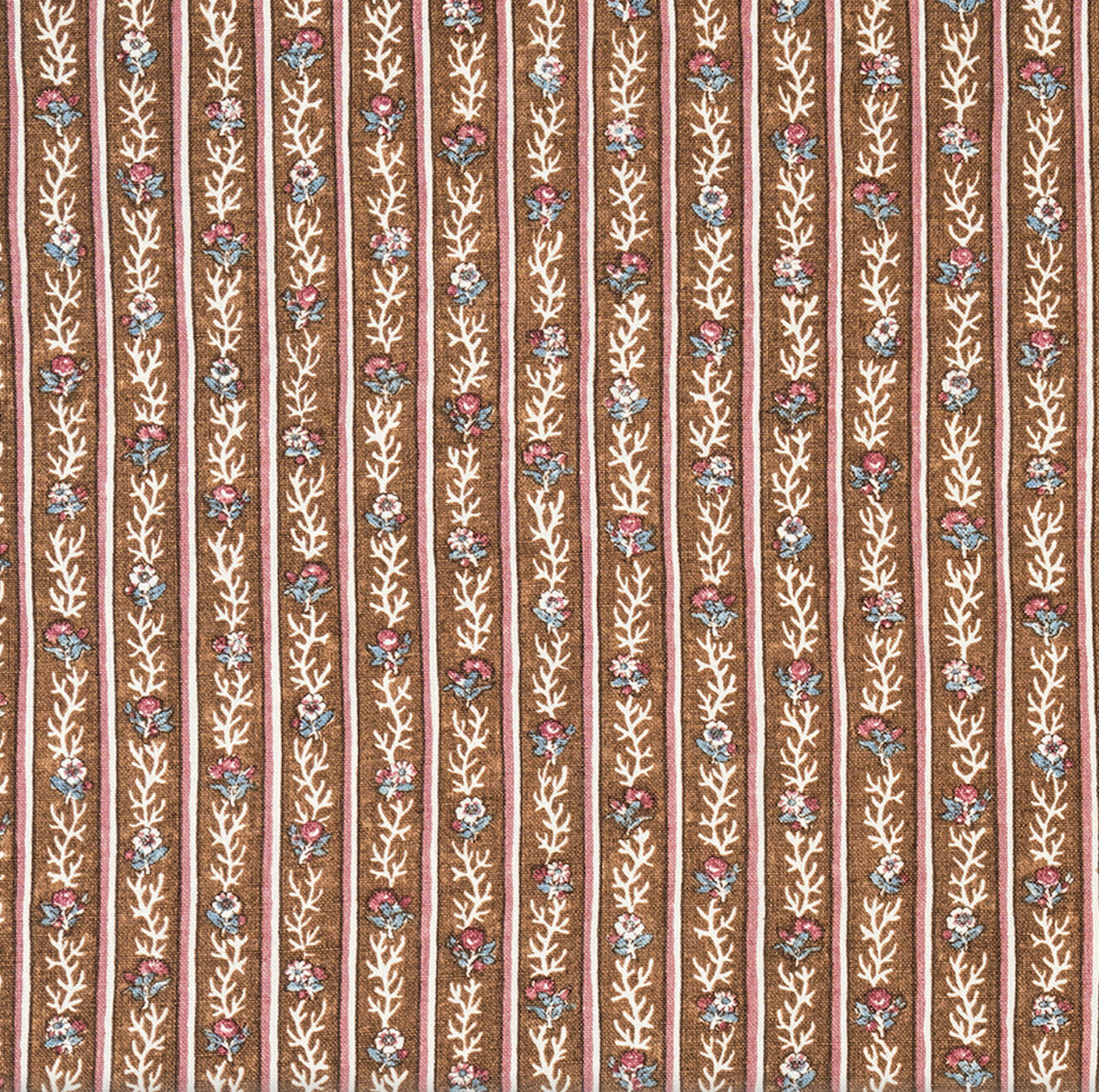 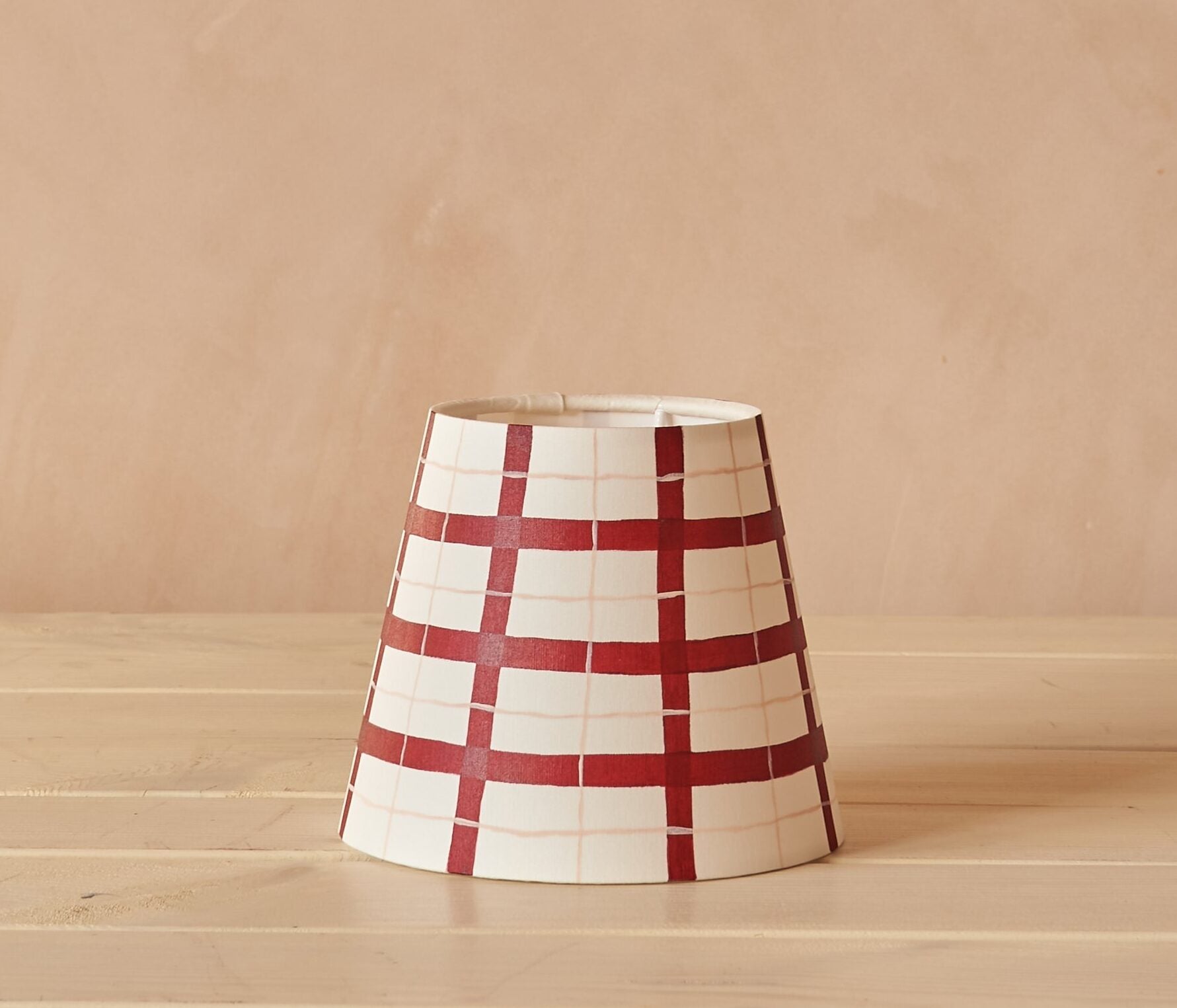 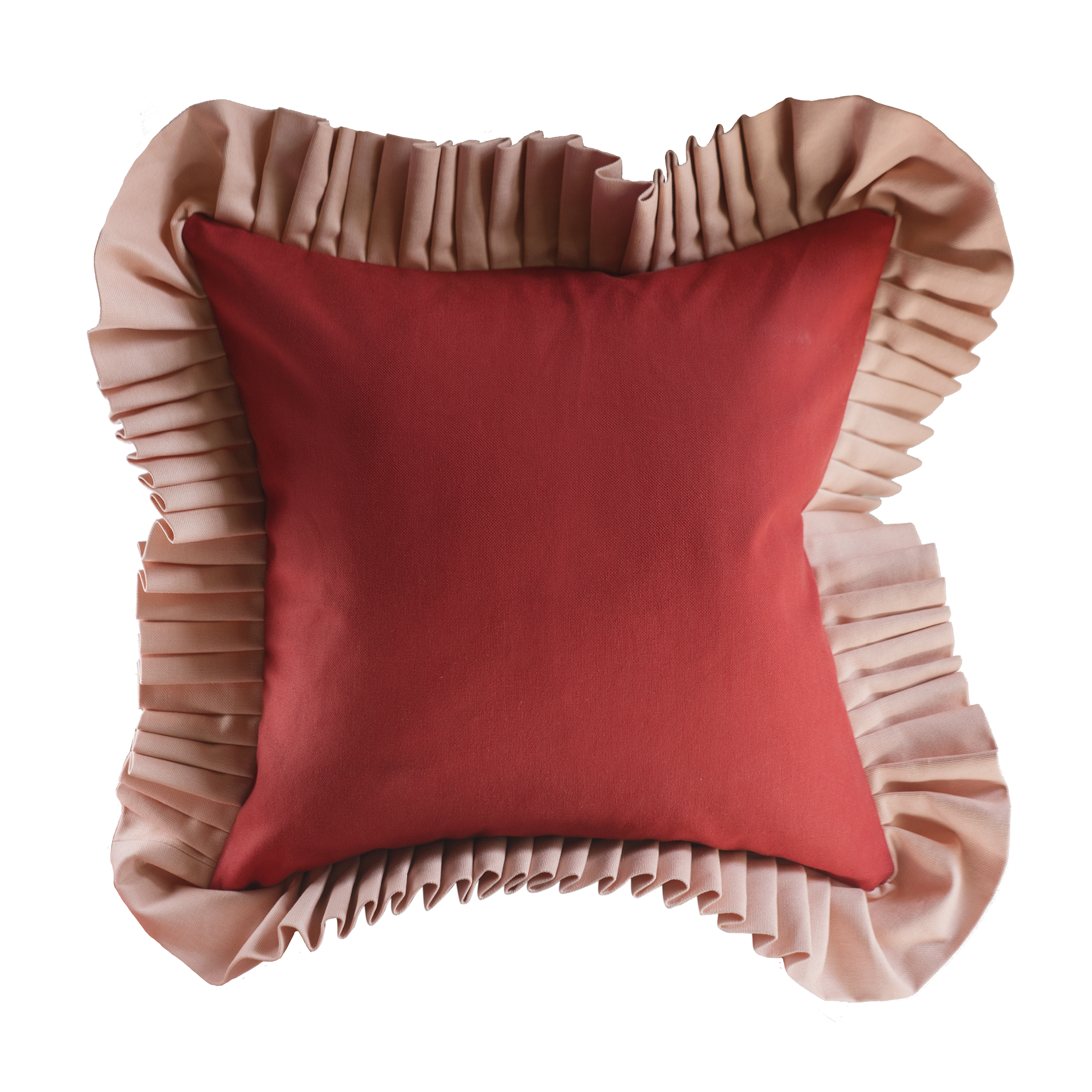 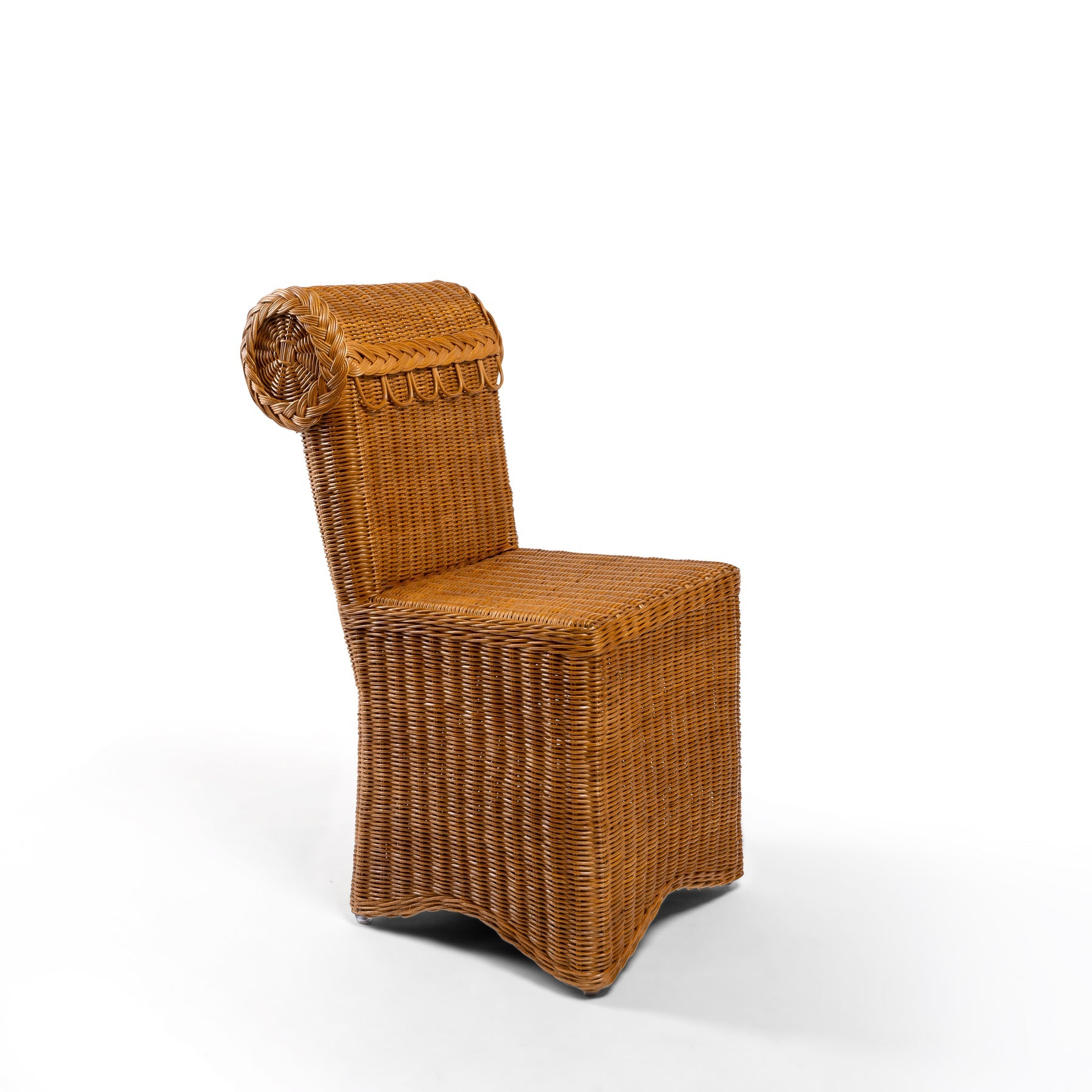 Where I buy plants and gardening supplies: Petersham Nurseries.

Biggest save: An oil painting next to my desk that was 10 pounds from a charity shop. I found a vintage walnut frame on eBay, and the whole thing feels transformed.

Textile in my home that is so me: The Gable in Hickory Brown from Sharland England. It’s a beautiful floral without being too chintzy, so it works for winter as well as summer.

I loved working with: My curtain-maker, Kath Groves, is just magic.

Other highly recommended craftspeople and brands: Edward Bulmer for paint and paint advice (his knowledge is second to none), Alternative Flooring for carpets and underlay advice, Caesarstone for countertops, and Johnstons of Elgin for curtains.

The one thing I wish I knew before renovating: We added extra time to our rental in anticipation of delays, but we still ended up moving like a traveling circus twice more. Double the amount of time you think you’ll need in a rental while you renovate.

If I could go back in time, I would: Time it so I wasn’t giving birth as we were renovating, but that being said, it all worked out for the best in the end!