A new take on L.A. mid-century. 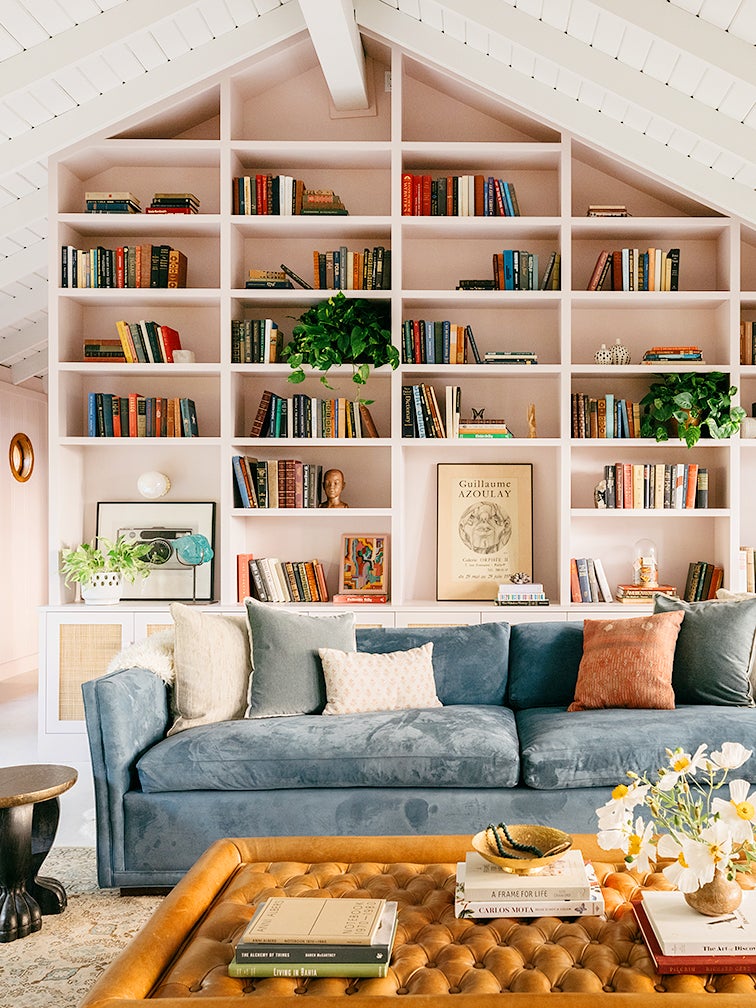 It was designer Elspeth Benoit’s decorative painters, Lisa Donohue and Brynn Gelbard of Londubh Studio, who first dubbed her 2,162-square-foot Los Angeles home “mid-century nautical.” “It felt very fitting,” says Benoit. “It always looked like a ship from the outside.” Small porthole windows line the front of the house—a detail that added charm, for sure, but also posed a need to renovate: Benoit wanted to be able to see her kids when they were playing outside. Plus introducing some more light into the circa-1940 post-and-beam structure couldn’t hurt.

For the first two years of living there, Benoit didn’t touch the bones (she just painted a few features white to make it livable for the time being). And when it did come time to change things up, she left the good stuff, like the tongue-and-groove paneling in the dining room and the exposed ceiling joists. “We wanted to honor the house that exists and all the people who lived there before and loved it for the same reasons,” says Benoit. Tonal green checkered floors (that’s where Gelbard and Donohue came in with Farrow & Ball’s Calke Green and Folly Green), oversize skylights, and stained-glass windows were welcome additions that blended right in.

Benoit tasked Dakota Witzenberg from To Do Something with the custom millwork in the living room, in addition to the kitchen and bathroom construction. The goal was to build a bookcase sturdy enough to house all of the her husband’s books and vinyl records, with shelves dedicated to displaying art. Behind the lower cane doors: their kids’ reads and the air return, which was relocated to make way for the yellow-lined bifold doors painted in Benjamin Moore’s Palace Ochre.

“We wanted to honor the house that exists and all the people who lived there before and loved it for the same reasons.”

“A large oil painting we had in our first home in Brooklyn called The Legend of the White Canoe became the touchstone for a lot of the colors in the house,” says Benoit, hinting at the blush pink tone (Portola Paints’s El Mirage) that flows from the built-ins, down the hallway, and to the stairwell.

Then there was the matter of the painted floors. “It’s a hot-button topic, but for us, it was a good way to mask the orangish tone that I didn’t really like,” says Benoit. While a crisp white was the answer in the main living space, the designer went much darker in the nearby dining room—an attempt to hide fallen crumbs that have the tendency to stay stuck in the cracks of the boards.

“The tonal palette speaks to the incredible views of Los Angeles,” she says. So it only made sense to continue the pattern into the sunroom beyond. The walls are painted in Farrow & Ball’s Black Blue, but it doesn’t feel like a black room, suggests Benoit. “I think I’m more attuned to the nuance of color. So to me, I see the blue when I look at it,” she explains.

Adding skylights to the kitchen not only made it brighter but offered views of the giant deciduous Liquid Amber tree outside. “It’s a nice way to keep in touch with the rhythms of the seasons,” says Benoit. She ripped out the old glossy black tile flooring that showed every bit of fallen food for Carrara marble slabs.

“It’s a nice way to keep in touch with the rhythms of the seasons.”

The cabinets are vintage reclaimed oak laid into veneer panels, while the countertops and backsplash are Alexandrita quartzite. On top of all that texture? An ultra-tactile vent hood coated in the same Portola Paints’s Roman Clay finish in the color Nitty Gritty as the wall. 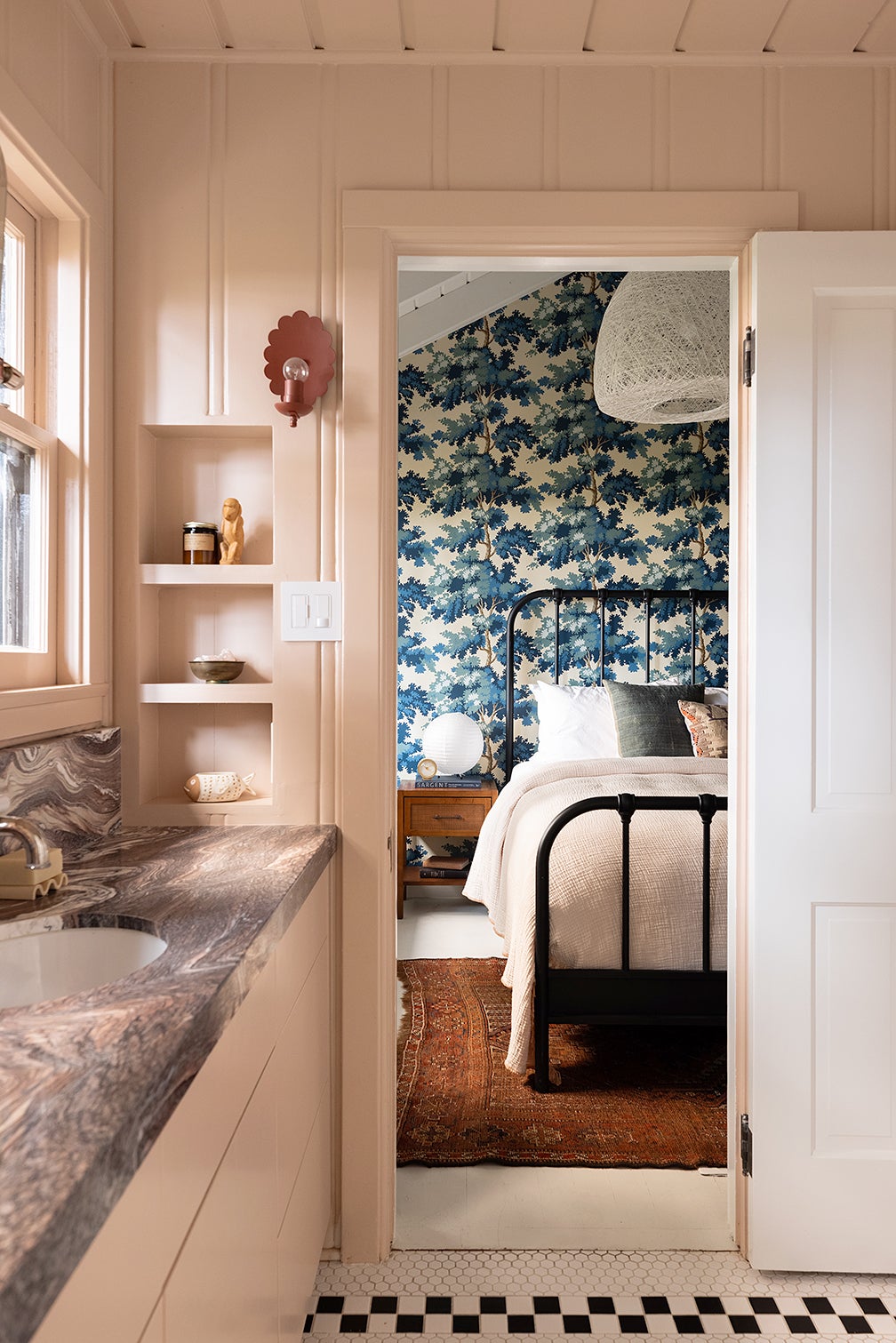 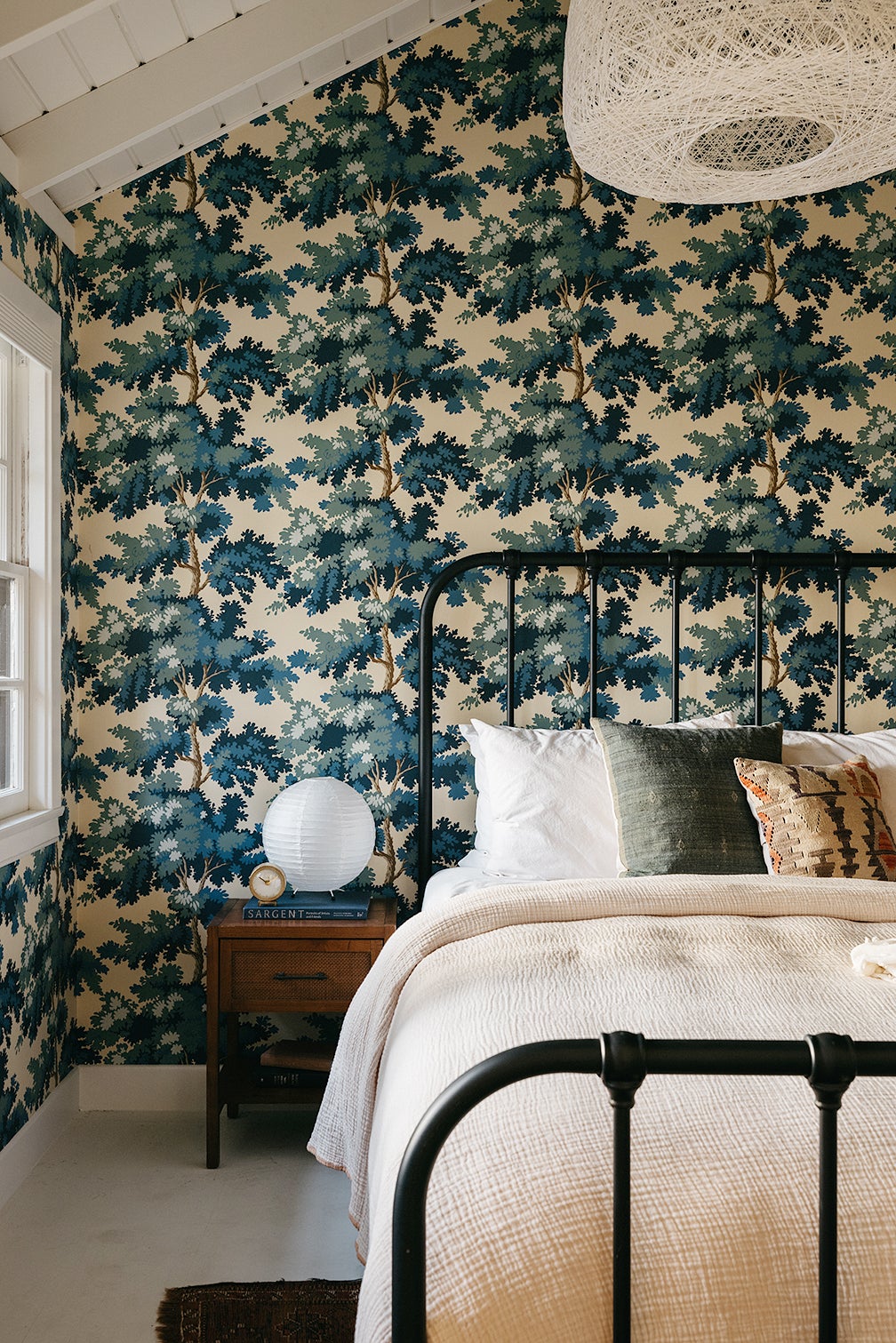 Benoit approached the shared kids’ bathroom with a fresh perspective in the form of a pink-toned marble called Cipollino Ondulato (you never know what you’ll find in the remnant pile at the stone yard). “I don’t think you have to dumb down on design in a children’s space,” she says.

The main bathroom follows a similar monochromatic scheme, this time in deep shades of blue and violet. Wanting to not compromise on storage for the Calacatta Viola countertop, Witzenberg carved two discrete push-to-open drawers out of the vanity stone. The large cabinets beneath are pull-out laundry bins. “It’s kind of like camouflage,” says Benoit.

Back outside, her landscape designer, Sam Harris from Culture Horticulture, constructed a new gated entry that drew on the home’s sailboat-like vibes. Rather than fill this new modern porthole window with glass, as she originally intended, Benoit left it open. “Packages and things could be tossed right through it, so it actually worked out really well,” she says with a laugh. Anchors aweigh!

Photography by Virtually Here Studios; Architecture by Arteberry Cooke; Staging and Styling by A 1000 x Better