Slicing and dicing made easy. 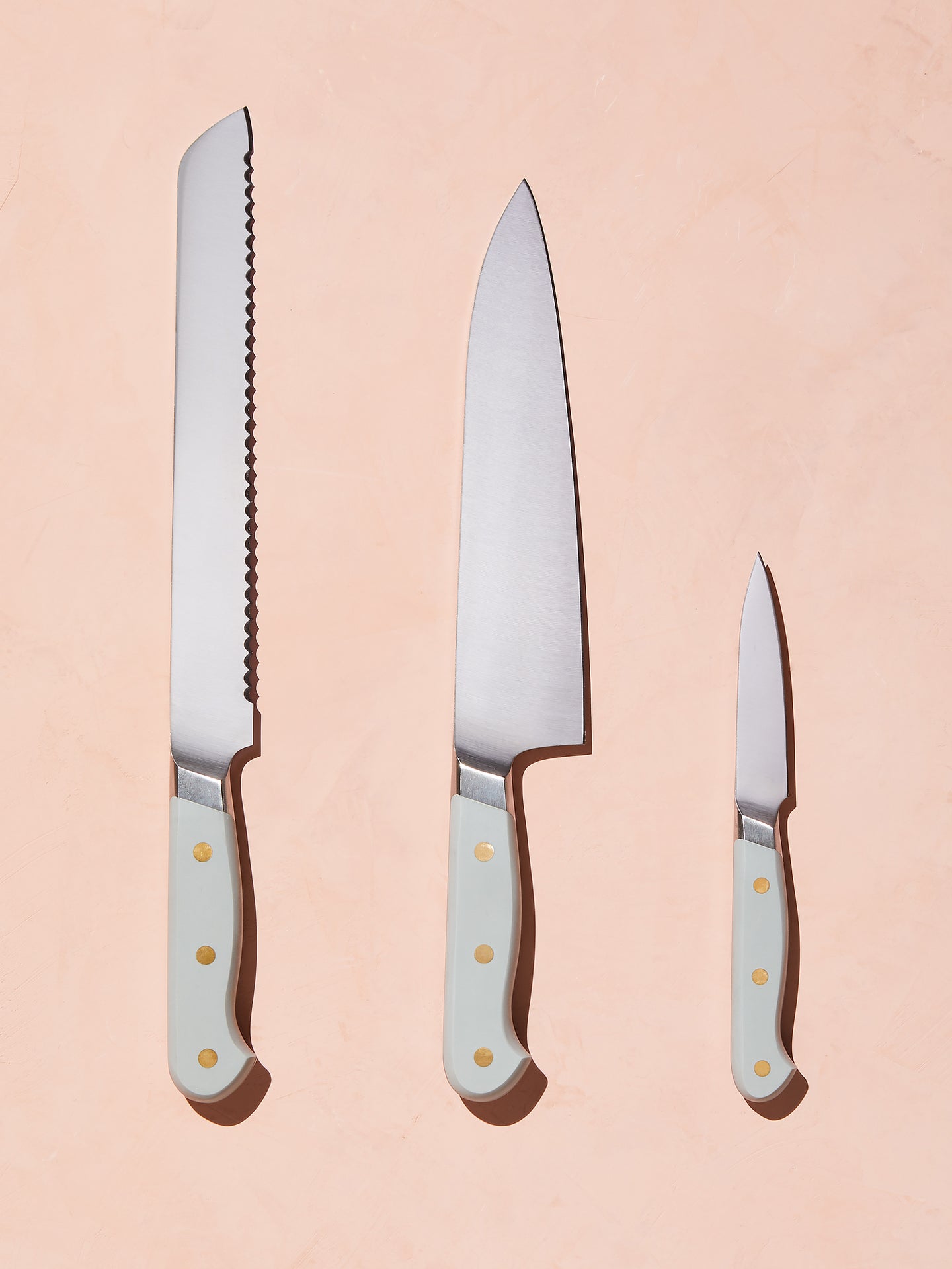 Photography by Rocky Luten for Food52

Dicing onions is a chore. Not because I’m particularly prone to tearing up at the sight of a shallot, but rather because my knives are an affront to cooking’s good name. There’s the paring knife I inherited (read: stole) from the house I shared with 10 people my last year of college, and there’s the steak knife that I’ve been using as a bread knife. (What? They both have serrated edges!) I’ve been rotating between the two for nearly four years, but as someone whose love for Food Network shows runs deep, it had become clear it was time for a change. How was I to become a culinary prodigy if it took me 15 minutes to mince parsley?

I have a shoebox kitchen, so right away I knew a large knife collection with a bulky countertop storage unit wasn’t right for me. They also needed to be durable—I don’t enjoy shopping for knives as much as I do, say, ceramic vessels, so this had to be a one-and-done purchase. Last but not least, I didn’t want the set to look like an industrial eyesore whenever it was out on my counter.

The answer came in the form of a press release: Food52 was launching its first in-house knife kit. It ticked all the boxes: The range includes a chef’s knife, a bread knife, and a paring knife; they’re each available in gorgeous colors such as teal and blush; and the blades are forged steel, which Ina Garten says are the best kind, and I would trust that woman with my life. I brought home a set and started mincing.

Photography by Rocky Luten for Food52

I immediately put the chef’s knife, purportedly the staple of any good kitchen, to work, slicing potatoes, onions, and bacon for a baked eggs–type dish that rescued me from a post-work haze of hangriness. I also used it for chopping spinach and dicing apples, pulling both off with equal aplomb thanks to its sharpness. In regards to the serrated knife, I now can’t believe I ever tried to slice sourdough without one. Both felt heavy (in a good way) and sturdy; they cut prep time basically in half. No pun intended.

But the paring knife is hands down my favorite. It’s only 3.5 inches long but mighty, handling peeling citrus and hulling strawberries with dexterity. I can already see it as my most-used tool, between the hastily put-together cheese boards it’ll star in—the vintage-inspired design is worthy of display—and the summer fruit salads I aspirationally hope to consume in 2020.

You can buy Food52’s knives individually or as a bundle for $139. Most professional-grade options run in the multi-hundreds range (for example, my queen Ina Garten’s favorite retails for $350), although it’s worth mentioning that Material (which I see as Food52’s closest competition) has an equally beginner-friendly set of three that’s priced at $155. In the end, if you’re serious about beefing up your kitchen skills, any chef will tell you that a good knife is the first thing to buy—and when the knife in question looks as good as these, it’s easy to take the plunge. Chop, chop.

See more kitchen essentials: My Favorite Cooking Tool Isn’t Meant for the Kitchen Chrissy Teigen’s New $40 Kitchen Staple Will Get You Through Winter Treat Your Table to Technicolor Napkins