This Little Boy’s Bedroom Casually Has a Two-Story Slide 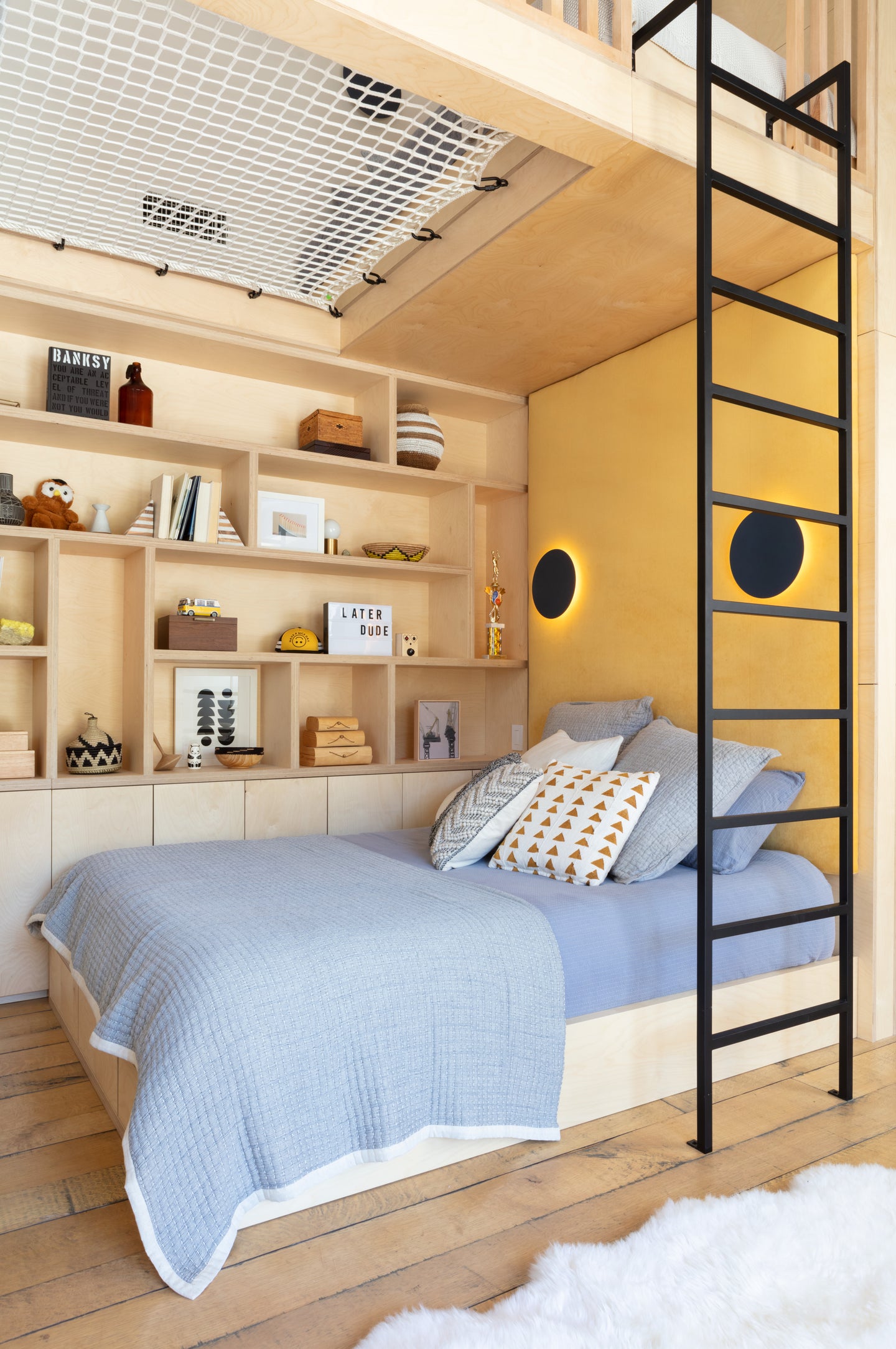 When a baby is born, the older sibling often has to give up his room to make space for a nursery, and the parents typically go the extra mile to carve out a new bedroom that won’t make the big kid feel like he is missing out. But few of them go quite as far as this Beverly Hills couple. With a baby girl on the way, they decided to relocate their 7-year-old son to their guest bedroom—a double-height space with plenty of room to play. And not just with Legos.

“The boy had always wanted a slide, so we thought we could use that loft area as a playing space,” explains Shannon Wollack, founder-partner of Studio Life.Style, the firm behind the overhaul. The feature was the jumping-off point for a child’s room that would make any adult envious.

“The mother wanted to make sure that he had a special space to grow into,” says the designer. “She wanted one that he could get excited about, so he wouldn’t feel sad about his new sister taking over his old room.” Here, we asked Wollack to share her top tips on how to decorate fun but functional kids’ rooms (and en suite bathrooms to match).

The old guest room already had two lofted beds, and the designer immediately saw potential: “We thought we could use that loft as a playing space, add a slide, and make this whole thing wrap around the room so he could walk about, kind of like a modern-day gym for kids,” explains Wollack. Adding to the elevated sleeping quarters, she used netting typically found on catamarans to create a hammock-like reading nook.

Under the lofted bed, the designer installed a desk for homework, built-in shelving for storage, and a queen bed with a mustard linen-upholstered headboard. “We wanted it to be cozy and cave-like, but we needed lighting for reading,” she says. She decided to add electrical wiring to the custom bed frame for sconces and drilled the lights straight through the headboard. With a room that now sleeps four, there is plenty of space for slumber parties.

A typical nursery often features a mobile swirling over the crib, but Wollack wanted to push these elements further in the family’s new nursery. To do this, she called on the help of local artist Laura Stewart, who designed a canopy made from colorful strings, which hangs in front of a wall mural inspired by the California mountains. “The canopy is kind of like an art installation; it’s not your average mobile,” she explains. “It’s colorful and good for the baby, but when she transitions out of the crib, it can be moved.”

The mural idea came from the designer’s struggle to find a wallpaper. “Nothing was fitting right,” says Wollack. So instead, she asked Stewart to cover the lower half of the walls in a landscape in the same shades as the string canopy. The result is a space the little girl can grow into.

The family was lucky that each space came with its own en suite bathroom, but they needed a bit of a facelift. Instead of ripping everything out and starting from scratch, the designer decided to simply breathe new life into them with floor-to-ceiling geometric tile. “The green bathroom was just a basic space that we wanted to jazz up,” says Wollack. “We didn’t rip out the cabinetry. We just knew we would get a big impact by adding a really colorful tile.”

The girl’s bathroom got a similar facelift in the form of pink tiles stacked vertically, a new floating vanity, and upgraded fixtures. “We wanted it to be cute but a little more elevated and sophisticated than your normal nursery bathroom.” One thing is for sure: Studio Life.Style has set the bar high for decorating children’s rooms.

Discover more kids’ rooms we love: Of a Kind Cofounder Claire Mazur’s Colorful Nursery Is Proof Design Risks Pay Off Christene Barberich’s New Baby’s Nursery Is a Technicolor Dream When Justina Blakeney Is Your Friend, You Get the Coolest Nursery