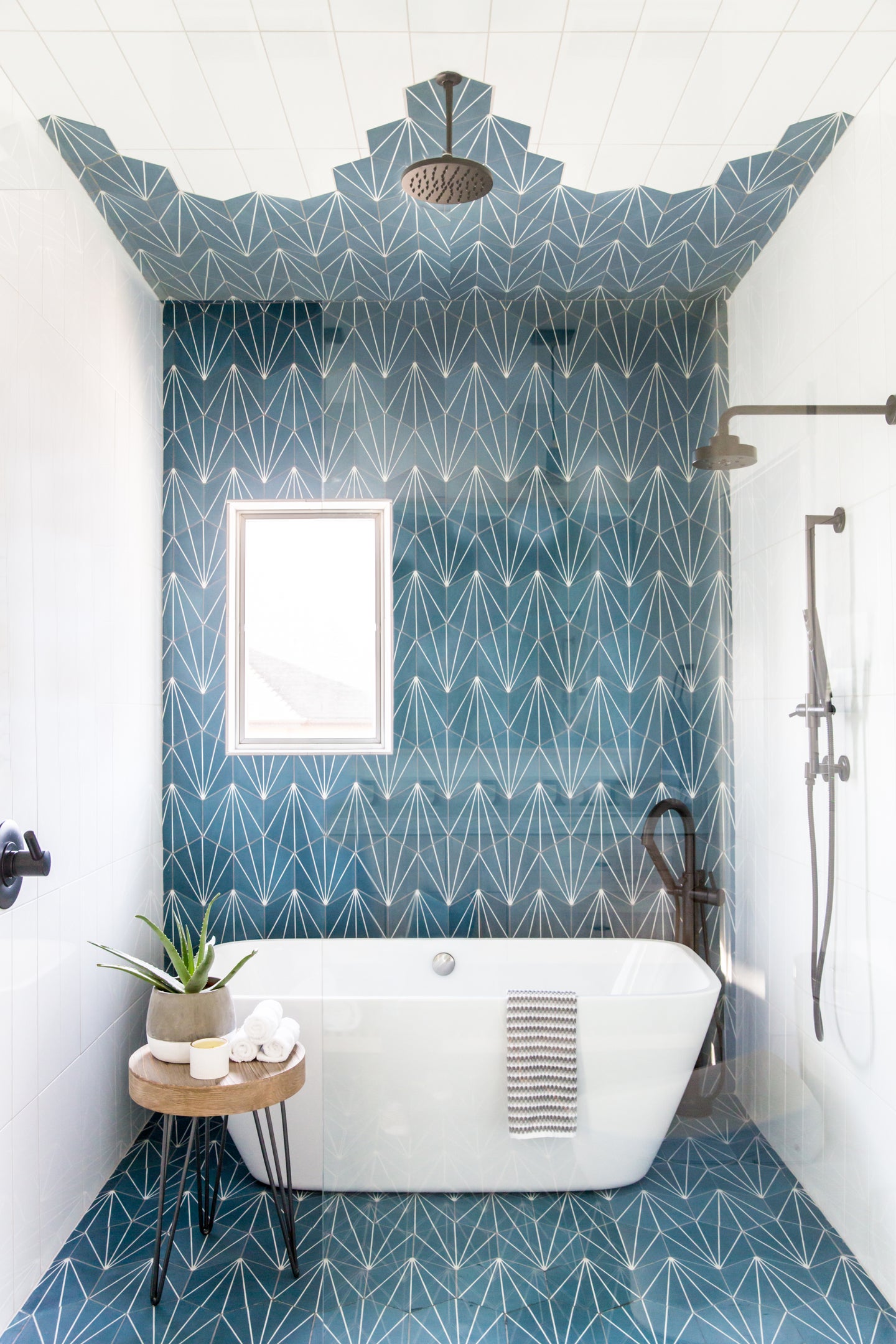 Kids’ bathrooms usually get the short end of the stick—and often for good reason. Come bathtime, parents are rightfully more concerned about controlling the chaos than they are about whether or not the texture of the copper faucets undermines the understated appeal of the leather pulls on the vanity. Andrea West, however, seems to have uncovered a compromise. Fitting for both water fights and personal spa days, the dual-entry bathroom that the Utah-based designer recently completed for two young boys features a major tile moment.

“I’m pretty sure the tile guy was not my biggest fan,” laughs West. Snuggled in between two equally playful bedrooms, the joint shower-tub area is framed by a statement tile configuration that seemingly melts up the wall and onto the ceiling.

“We said, ‘Okay, this room is really small, but we want some color, we want some pattern, and we want a wow-statement bathroom,’” says West. “I personally love to design with high-contrast.”

The visual impact doesn’t stop there. Ahead, the designer shares her bed and bath design tips for kids and kids at heart.

Lead with the things you love

While mom and dad ultimately had the final say, West sourced much of her inspiration from the vivid imaginations of the 8-year-old and 12-year-old boys who call these bedrooms home. “The boys are full of personality and were really excited about the process,” shares West.

Soaring peaks and faraway galaxies spoke to the youngest boy, whose only must-have was a mountain mural. The couple’s oldest son, on the other hand, was more keen on emerald green and Star Wars. Far from childish but ever so cool, West incorporated their current interests through bold wall coverings and artwork—two elements that can easily be swapped out down the road.

“The parents wanted these rooms to speak to what the kids like now but didn’t want to turn around and redo them in, say, three to five years,” explains the designer. “We wanted to capture their interests and likes but also make sure that it was a space they could grow with.”

Fill in the gaps with accents that can go anywhere

After landing on a hand-painted mountain mural and glow-in-the-dark star wallpaper for the youngest child’s room, West searched for a sophisticated balance in the details.

“With some of the items that we picked, if you took them out of the room as a whole, you’d see that they could go in a master bedroom or family room. But together in this space, they flow really well with the theme.”

The majority of furnishings that fill the bedrooms—note the West Elm nightstands in the mountain-themed room and the Restoration Hardware bed in the green bedroom—will last the little ones well into their high school years.

advertisement
“We wanted to capture their interests and likes but also make sure that it was a space they could grow with.”

Save on space with sliding doors

Though they look as luxe as a master bedroom, neither of the bedrooms come close on space. “The spaces themselves are quite tight,” says West. Without compromising on the couple’s vision for queen beds, the designer preserved what walking room she could with sliding doors.

“Instead of having doors that swing into the rooms, I thought we could really save space with barn-style doors that slide and also set the theme,” suggests West. A live-edge wood door frames one side of the dual-entry bath, while a textured emerald door frames the other.

Make your bathroom layout work for you

When West first started to map out plans for the bathroom redesign, her clients were convinced that the space was too small for a freestanding tub—the most important element on their wish list.

“We had to accommodate for traffic between the two bedrooms, so we played around with a few layouts and eventually found that this one allowed them to have both a shower and a tub,” explains West.

The walk-in shower-tub combo isn’t just a major space-saver—it also makes bathtime a whole lot simpler. “It’s really just a wet room. The feedback that the parents have given is that it’s a full-on water fight in there every night,” she laughs. “And it’s so easy to clean. They just spray it down when they’re done.”

“This room is really small, but we want some color, we want some pattern, and we want a wow-statement bathroom.”

Think strategically about your tile choices

Anyone who has ever had to share a bathroom with a sibling knows that drama is inevitable. In this case, the only drama (for now) is offered up by the draw-dropping tile moment that leads into the walk-in shower.

“If I had to choose only one design element in a room, it’d be tile,” shares West. “I just think you can get away with so much more with those hard finishes in a bathroom. You have a lot more creativity and flexibility.”

While the geometric motif on the Starburst Hex from the Cement Tile Shop redefines attention-grabbing, the larger-than-life configuration also serves another purpose. “Starting on the floor and going all the way up the back wall actually makes the room feel larger,” explains West.

Love how the tile trickles out at the showerhead? It’s as hard as it looks. Each of the Hex tiles was individually cut to perfectly align with the white subway tiles, which might explain why West’s tile installer was hesitant at first.

You don’t have to convince us: We can’t wait to bring this all-over tile moment home—water fights and all.

See more stories like this:  28 Genius Ideas That Will Turn Your Bathroom Into a Chic Oasis 13 Daring Bathroom Sinks That Put Any Ordinary Pedestal to Shame 9 Things Your Bathroom Doesn’t Really Need (and What to Replace It With)