The best thing we saw on our feeds this month. 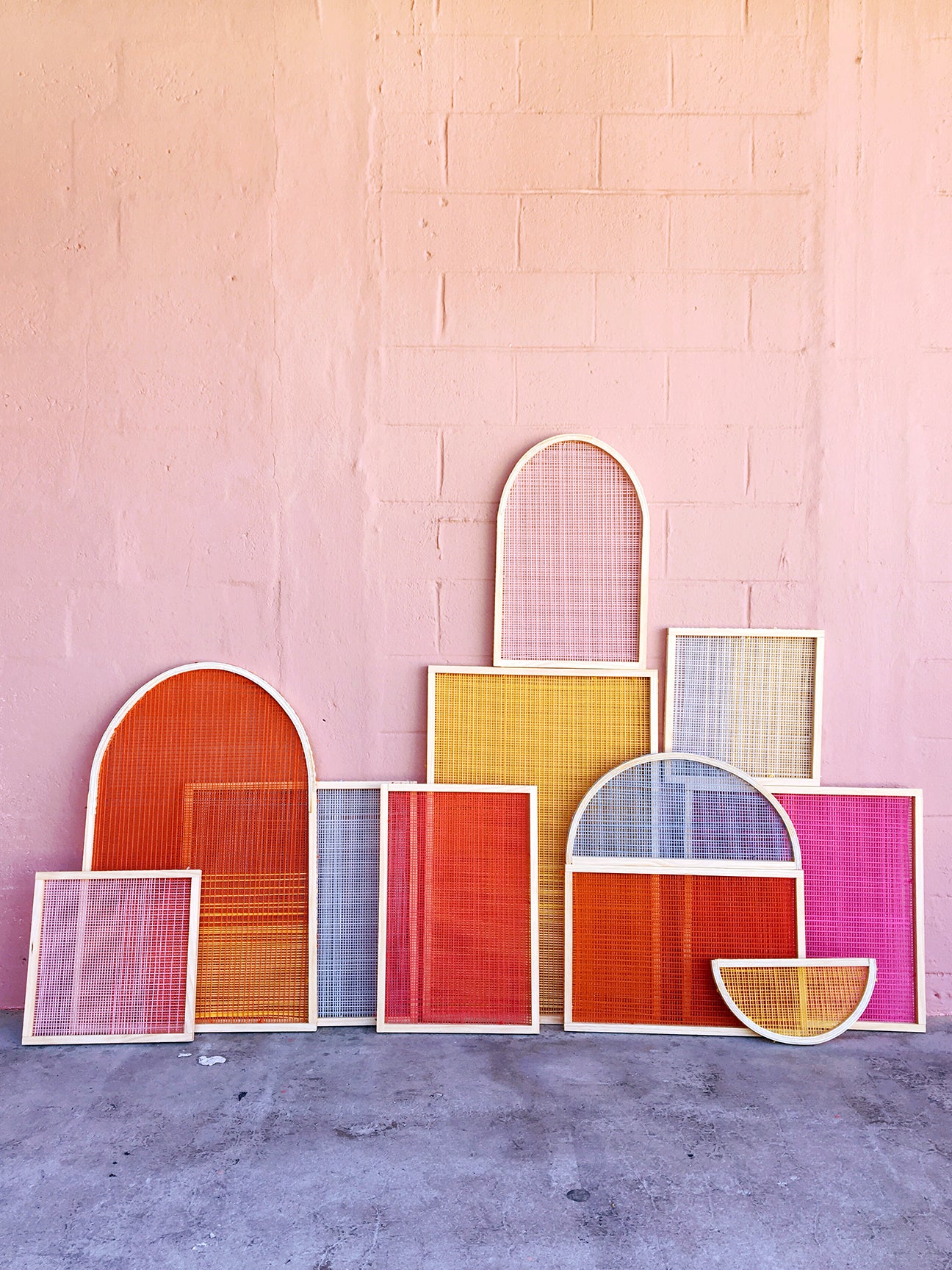 Hayley Sheldon’s installation for Elizabeth Ave Station, an event space in her town of Palm Beach, Florida, is basically a giant mobile for adults. “I often find myself designing projects that are really repetitive,” says the artist and former display coordinator for Anthropologie. That’s essentially what this whimsical project is: strings on strings on strings of colorful yarn woven through plywood frames.

It’s no wonder pro DIY’ers like Joy Cho and The House That Lars Built have been pinning and regramming the hanging screens all summer. The photo we kept seeing all over our feeds, showing the pieces propped up against a pink wall, wasn’t even the final product, but still, the enchantment of traditional gallery wall lost its luster in comparison. “They can be hung. They can be wall-based,” says Sheldon. “ I really love the idea of setting them on the mantel like artwork.”

The artist walked us through the process, and while there are some basic construction skills required if you want to try your hand at Sheldon’s ’grammable screens, most of the steps are pretty simple. Dream weavers, read on.

With a miter saw, Sheldon cut hardware-store pine and bendable plywood into one-inch strips and used the pieces to create squares, rectangles, and semi-circles. Scale—something she learned a ton about during her 10 years at Anthropologie—is especially important to keep in mind when you’re staggering similar objects. “I didn’t want to make 200 of the same thing, so I had to make them large enough to feel like there was enough visual weight.”

Using a drill press, Sheldon punched multiple holes ¼-inch apart along the frames of the wood. This is where you’ll tie off the ends of the yarn. “Honestly, the measuring and the holes almost took longer than the weaving,” says Sheldon. The artist adds that a regular drill works just fine for this part, too, but that it might be tougher to get evenly spaced holes. You can also rent a miter saw from most Home Depots.

Palette inspiration came easy to Sheldon—she scrolled through her Pinterest and realized she’d been saving lots of images with peaches, dusty pinks, and mustard yellows. “I was really happy with how they worked together,” she says. The artist incorporated complementary colors so that when the pieces overlapped, they would make a brand-new hue. The wool yarn came from her local Michael’s. “I’m really inspired by the designer Mary Blair and, in the end, I think I was channeling some Small World vibes with the joyful colors and graphic shapes,” says Sheldon.

Step 4: Get Lost in the Weave

Over. Under. Over. Under. That’s really all there is to it once the frames are complete and the yarn is in hand. With a large embroidery needle, Sheldon wove the horizontal lines first, passing a single string of yarn from one hole to the opposite. After tying it off at the edges, she flipped the piece and worked the yarn over and under the existing string. “It’s not actually a basketweave because that would take so long,” she says. “I love to work with textiles, but I’m no Maryanne Moodie.”

For all of us who are less skilled in the crafting department, Sheldon is currently working with a carpenter to create new shapes (including waves!) with the aim of selling individual screens. Until then, we’ll be looking for an empty wall to lean them on.

See more stories like this:  The One Thing You Should Paint for Your Wedding Is Not What You Think You Don’t Need to Be an Artist to DIY This Color-Blocked Mural 6 DIY Plant Displays to Take Your Green Scene to the Next Level