What Does It Take to Make an 1850s Victorian Home Feel Thoroughly Modern?

Five years, a big imagination, and a lot of grit. 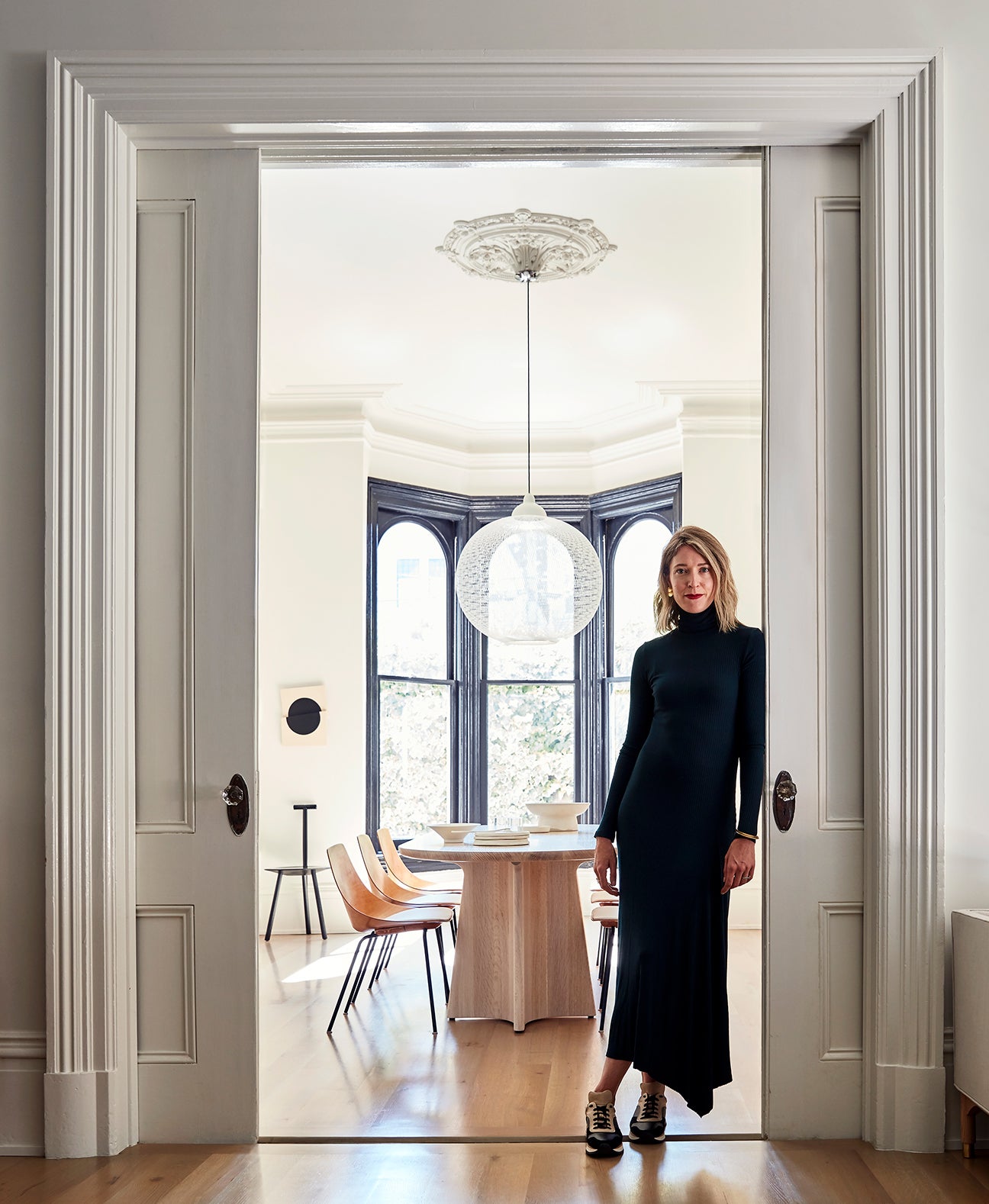 This story originally appeared in the Winter 2019 issue of Domino, titled “Character Study.” Subscribe to be the first to receive each issue.Crumbling ceilings, scratched floors, a two-by-four plank as a staircase banister—this is not the archetype of a perfect house. But it was for Erin Hiemstra, founder of design website Apartment 34, when she saw a Victorian circa 1850s in San Francisco’s Bayview neighborhood five years ago. “It was the turn-it-into-your-dream-home scenario,” she says. Having been outbid twice on other properties over the course of two years, she hoped the third time would be the charm.

Like most San Francisco real estate (a notoriously competitive market), this house came with a great acquisition story. Hiemstra’s husband, Chris, was driving by the lot, saw a “For Sale” sign out front, and wrote down the details. It wasn’t even officially on the market yet, but the couple made a preemptive bid and snapped it up. That analog start is fitting for an antique home in which charming eight-foot arched windows and a clapboard exterior give way to equally beautiful interiors: vast, light-welcoming bay windows and transoms, original glass and brass doorknobs, and rooms full of crown molding. What seemed to be drawbacks⁠—ceilings and walls painted in a “sea of insane colors,” a jerry-rigged mishmash kitchen, modified 1970s fireplaces (of the garish variety)⁠—were no match for Hiemstra’s imagination and grit. She began her career in politics on Capitol Hill (more points for grit), which masked her latent design talents but inadvertently influenced her future passion: She lived in a classic D.C. row house, and 100-plus-year-old buildings have stayed in her creative psyche since.

As the founder of one of the first recognized interiors blogs, Hiemstra was a great candidate to take up a restoration. Though it was an adventure, to be sure. Completely self-taught, she had dabbled in cosmetic projects at her rental lofts and former condo in Seattle (the inspiration that launched Apartment 34)—paint, fixtures, furniture—but had never taken on a full-scale gut renovation. That didn’t deter her. “I loved the historic details, character, and uniqueness of this home and didn’t want to strip it of the feel it deserved,” explains Hiemstra. She tapped architect Seth Brookshire to help bring her concept (dubbed This Old Victorian on her blog) to life.

First came the loving yet painstaking process of maintaining the important original features: rebuilding ceiling medallions, preserving moldings, ensuring the functionality of pocket doors (down to the hardware), and restoring fireplaces in a Victorian-era style. Without a general contractor, Hiemstra relied on Google, Instagram, local Bayview shops, and her DIY-savvy husband to help source the right builders and materials. She also read up on electrical plans, teaching herself about wallboards and insulation, figuring out permits, and getting a grasp on stone sizes.

Still, a few mishaps crept in along the way. The wood floor stain didn’t take properly and had to be redone, turning a days-long task into a weeks-long saga. In another setback, when Hiemstra was six weeks postpartum with now 4-year-old son Carter, she discovered she needed to choose final light fixtures in order for any in-wall wiring to begin. “I was sleep-deprived and picking things in haste,” Hiemstra remembers. Within days, dozens of designs were en route (some regrettable and later subbed out).

Sleep or not, the job got done. The couple managed to maintain the building’s historic elements while updating it for a family of three (plus an energetic French bulldog puppy), which meant changing the overall footprint. They took away walls downstairs between the dollhouse-size rooms, creating an open and functional kitchen, family room, and dining room, and reconfigured the second floor with a master suite and an extra bathroom. The rooms now flow seamlessly from one to the next—a luxury not inherent to 1800s American architecture. “I step into every single space every day,” says Hiemstra of the new layout.

Though she’s not a technical designer by trade, you’d never know that by looking at the home. The revitalized framework gave her a platform to flex her design muscles, incorporating a mix of European and West Coast influences. Pale wood floors contrast against high-gloss black window frames and matte white walls. “A mellow palette lets the items pop, rather than the walls themselves being the decor,” Hiemstra explains. “Plus, the house needs to be calm because chaos comes through every day!” Modern light fixtures—caged, lampshade-style, abstract—hang from decorative Victorian ceiling medallions in nearly every 12-foot-tall room. Opening to the media room, a double-width windowed steel door hugs classic white molding—a shoulder-to-shoulder combination of new and old. Hiemstra even included a window above the industrial door to echo the original transoms in the second-floor bedrooms.

“I had this vision of the character shining through in a really neat way. You want to ask questions about the history, but then you’re also intrigued by elements that feel very now,” she says of her inspiration.

The designs placed in each airy room are, in a word, intentional. Hiemstra’s visits to Sweden and Denmark last year inspired her to pare down and use negative space to highlight an object’s individuality, from mid-century seaters and artwork sourced on Elsie Green to an 1890s French gilded mirror (a 1stdibs find) and a vintage Dutch rattan-and-wool chair scored at Amsterdam Modern. She also invested in custom furniture for larger pieces, like couches and beds, to complement the scale of the architecture. (The first bed she bought looked miniature in the master bedroom—a measurement misjudgment they lived with and laughed about for two years.) As for accessories, Hiemstra gravitates to interesting finds she can’t look away from: “I am meticulous about hunting down items’ sources in photos. You have to be like a detective buying things you love,” she advises. Once she has the right objects, whether it’s a lamp from Finnish Design Shop or a planter from Ikea, Hiemstra practices removing and swapping things for the perfectly balanced vignette. When a room is appropriately understated yet bold, it’s finished.

Good things take time, and five years later, after much scrupulous rebuilding and redoing, the paintbrushes have been set down and the renovation is complete. “It took this long because I made a point to have truly special elements,” Hiemstra explains. “In these days of HGTV and design blogs, the expectation is that a house should come together both quickly and cheaply, but that’s a myth.”