And the sconce that makes it feel like a “holiday in the South of France.” 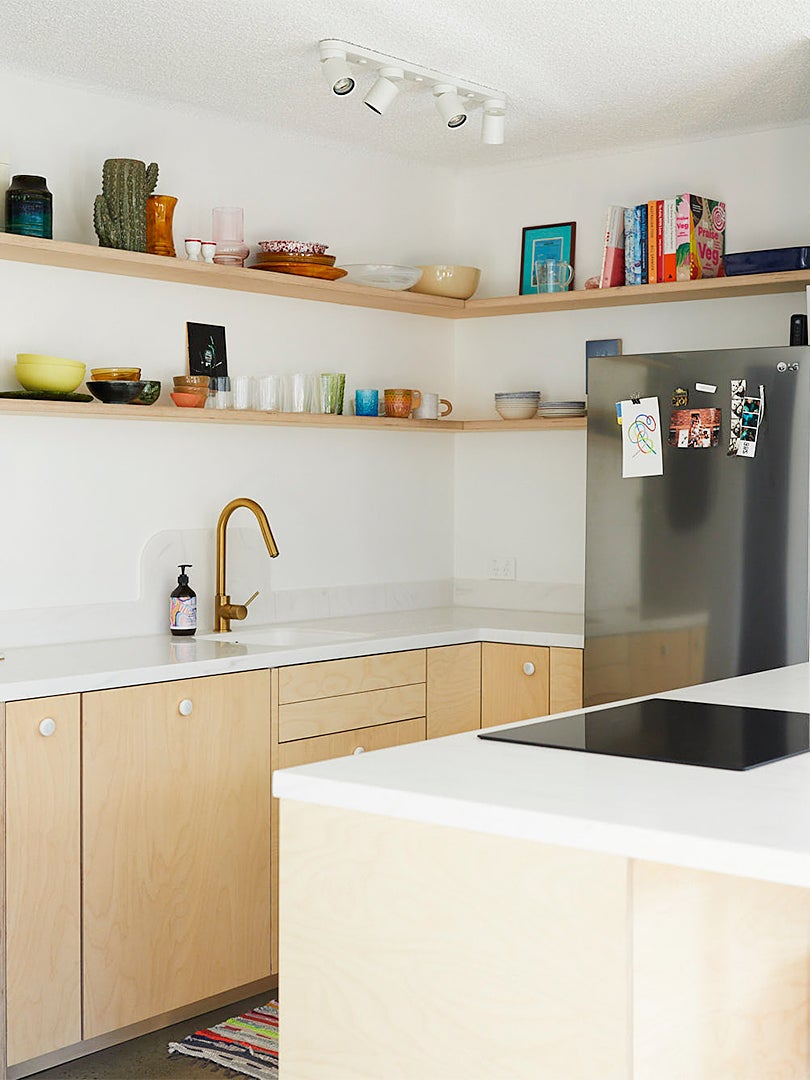 While everyone else was making sourdough bread during the height of the pandemic, designer and illustrator Ngaio Parr and her husband, Julian, were making coffee tables in their apartment complex’s parking lot. “We apologized to our neighbors ahead of time,” says Parr with a laugh. Because most of the pair’s belongings were in storage (the Australian natives and their Boston terrier, Iggy Pup, were living in Los Angeles pre-COVID but briefly left the States during quarantine), they had to resort to making the furniture for their new quaint apartment on the beach in Burleigh totally from scratch. After renting a jigsaw and buying some camphor laurel wood, Parr did what she’s always done in her career. “When I’m not 100 percent sure how to make something happen, I just give it a go,” she says. “It’s not perfect, but that adds to the look.”

Eager to settle into their new space during lockdown, the couple packed what Parr estimates to be a year and a half’s worth of renovations into six months (it was one of the perks of being home all the time). They ripped out the dated white tiles and carpet throughout and polished the concrete floors underneath them, while the kitchen got a complete gutting—and this was all while Parr was writing and illustrating her first project (coming out this November). “I work best when I have a little too much going on,” she says.

Three different contractors told the couple that it would be impossible to mount floating shelves in the kitchen because of the hollow brick within the walls. “They all said we were crazy,” says Parr, who went ahead and did it anyway (an engineer friend came to check it out and make sure it was stable).

Fresh plywood cabinet fronts (the frames are IKEA) and matte-yet-almost-translucent white Corian countertops brightened up the U-shaped space. The latter addition was by far their biggest investment for the whole apartment. “But the texture and color really make the kitchen look more approachable and warm,” notes Parr.

Elsewhere the walls are concrete, posing yet another challenge (this time with lighting). The fixture in the living room was in an awkward position on the surface, but the couple couldn’t afford to shift all the wiring, so they simply swapped out the old sconce for a new custom plaster one by Anna Charlesworth that’s made completely by hand. “It makes me feel like I’m holidaying in the South of France,” Parr says of its warm glow.

The tiered coffee table setup wasn’t the only furniture project the pair worked into their remodeling plans. They took leftover planks used for the kitchen shelves and turned them into a bench (the base is painted breeze blocks). It’s the perfect perch for Parr’s greenery collection, which spans spotted begonia to fishtail cactus, a variety that flowers once a year at the same time, no matter where it is in the world. “The flower is nearly the size of a dinner plate. It smells so strong and it only lasts for a day, then it dies,” she says.

Nearby there’s a dining table they constructed out of Laminex. The catch was, that specific muted blue shade was only available through the manufacturer in Melbourne (more than 2,000 miles away). Parr could have gone with a more readily available hue but decided to spend more on shipping to get it right. “That blue is why the table works,” she says.

The bedroom window treatments are another one-of-a-kind creation—and an all-around clever solution for an awkwardly placed window that reaches the ceiling. “We couldn’t put up a curtain rod,” she says. The single panel has little ties on the sides so it can roll up and loop onto hooks when they want to let light in.

The Donald Judd–esque desk (it’s IKEA) was Parr’s home base in between DIYs, where she worked on her fortnightly recommendations newsletter, Some Things, and her first-ever publication, The Grief Companion (a modern illustrated deck of cards that provides gentle guidance, support, and knowledge for those navigating loss). “If you pop up, you can see the water in the mirror from the desk,” she says. When her arms were sore from mounting shelves or writing, she’d opt for a well-deserved surf break.