Cheers to throwing out the rulebook and living large. 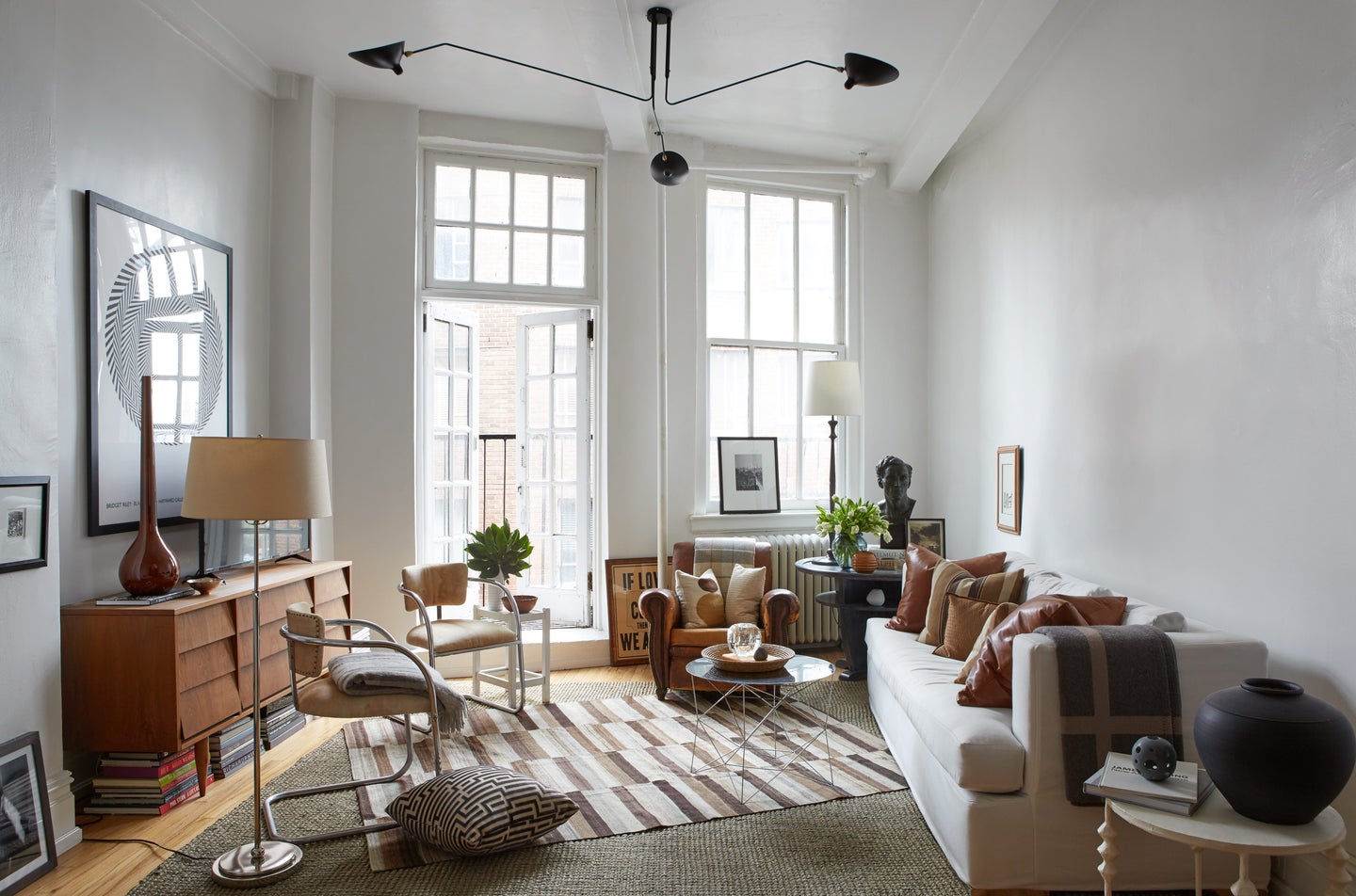 The fascinating thing about New York City buildings is that they’re full of unexpected history.

At first glance, they might seem like just another brownstone home or one more pre-war building. But behind the oft doorman-guarded doors lie decades of rich history. Interior designer Dan Mazzarini’s building is no different. Built in the 1920s as an industrial factory in the heart of Greenwich Village, it was eventually converted into artists’ lofts rumored to have once been home to Jackson Pollock and Diego Rivera. It now sits adjacent to the Parsons School of Design.

Mazzarini, principal at BHDM Design, bought the apartment from a 95-year-old neighbor after living in the building for four years, proving that, when you see a good thing in NYC, you should hold on to it with clutched hands. Despite the limited square footage (480 to be exact), the designer’s home has something that many other apartments don’t: a story just as rich as the building it lives in.

The dresser in the living room was an impulsive eBay purchase Mazzarini made while jetlagged in Japan. Most of the art is from the Paris fleas. A few finds come from the designer’s grandparents’ cottage, while others are from West Elm and ABC Home. A tea set was purchased at a hotel in Mexico. A ribbed wood vase was found on a rosé-fueled online hunt. The bathroom vanity is actually a vintage Biedermeier dresser with a retrofitted sink. The rain shower was inspired by the Park Hyatt in Seoul. A (now reupholstered) ottoman was a curbside find.

They say Rome wasn’t built in a day, and neither was Mazzarini’s studio apartment. “It really feels like me and what my 18-year-old self thought of when I thought of living in NYC,” he told Domino. “I pinch myself that I get to live here and I love waking up to such a tall, bright and artistic space in such a rad neighborhood in Manhattan.”

Here’s how he makes this petite space work for him (and how he throws out the rulebook in the process).

Have fun with it

“I throw an annual holiday party in this space with about 80 people,” says Mazzarini. “I take the bed out, and the rest is a very Holly Golightly vibe—the more the merrier, and just keep the champagne flowing.” A true New Yorker, the designer has quickly learned that square footage should never dictate your lifestyle. If the champagne is flowing, people will come.

advertisement
“I pinch myself that I get to live here and I love waking up to such a tall, bright, and artistic space in such a rad neighborhood in Manhattan”

“I thought of this space as a deluxe little hotel suite,” explains Mazzarini while also joking that he only uses the space for cocktails. “All the kitchen millwork conceals the appliances. The panel-front dishwasher and fridge are all hidden. I wanted this sort of blue-gray cerused finish and natural white oak shelves. I love open shelves and being able to display other collections.” Where others would store extensive dinnerware sets, the designer displays art and photographs collected throughout the years.

advertisement
**“I throw an annual holiday party in this space with about 80 people. I take the bed out, and the rest is a very Holly Golightly vibe—the more the merrier, and just keep the champagne flowing.”

Don’t fall into a decluttering pit

“I’m no Marie Kondo,” says the self-professed maximalist. “I think most designers are fancy hoarders—we have a hard time letting go of beautiful things and love to surround ourselves with them. But I can be ruthless when it comes to cleaning out: If I touch it twice without storing it somewhere I usually toss it.” Instead, Mazzarini collects the items he loves freely, invests in smart storage solutions, and knows when to throw things that don’t serve him.

“I always live in neutrals,” says Mazzarini. “For me, after designing in so many palettes for other people all day, I just want my home to be quiet and neutral. Not boring—I love contrast—but shades of black, white, gray, camel, and caramel.” The limited color palette also helps keep the small space cohesive, especially given the many styles and periods present in such a tight space. “Design the way you dress,” he adds. “My house is somewhere between a white button-down and a black turtleneck.

“I’m no Marie Kondo. I think most designers are fancy hoarders—we have a hard time letting go of beautiful things and love to surround ourselves with them”

Think in volume, not square footage

“Aligning the entry to be on axis with the windows brought a ton more light to the kitchen and bath,” shared the designer. “And opening up the ceilings (half the space was dropped to eight feet) was important. Volume seems to be more important than area in small-space living sometimes.” Speaking of volume, he applied the same philosophy to the bathroom, where he built an extra-tall medicine cabinet and built a niche next to the sink that now serves as a linen closet.

You don’t need to live in a 480-square-foot studio to learn from Mazzarini’s best small space tips. With tall storage solutions that use up the vertical space in your apartment and beautiful, large cabinets that can hold a lot and serve multiple uses, you, too, can maximize your storage in the tiniest of rooms.

Tour more designers spaces we love: This Surf-Inspired Bachelor Pad Is a Master Class in Custom Renovations Now This Is How You Decorate With Color The Founder of Edie Parker Invites Us Inside Her Technicolor Upper East Side Apartment