A bright home on a budget for two roommates. 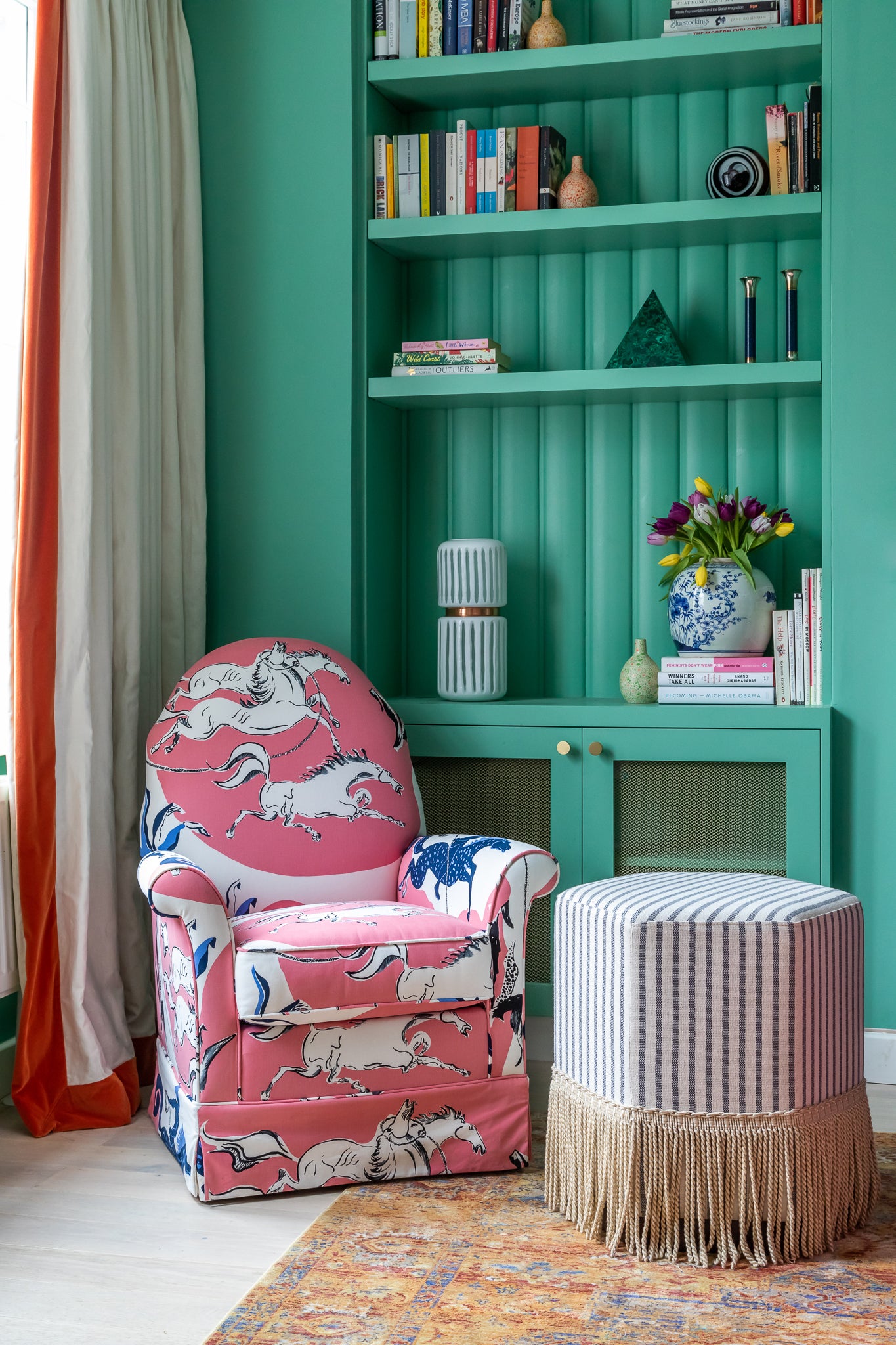 When most people buy an old home, it’s filled with quirks and decades of wallpaper to be stripped down. Emma Burch had the opposite problem. The Victorian-era apartment she purchased in South West London had been recently renovated by a developer and completely lacked charm or soul. “It felt a little bit clinical to begin with: no period features, super-bright LED lighting, slick bifolding doors” she remembers.

Still, she knew it was the place for her from the first moment she walked in the door: “It’s the first space that I had seen that felt ‘just right.’” The two-bedroom had just the right amount of open-plan airiness while still feeling safe and cozy with its smaller proportions. Wanting to inject life and character into the apartment she now shares with her college roommate, Hannah, Burch called on Lucy Barlow of design firm Barlow & Barlow.

Working within a much smaller budget than she’s used to, the designer infused space after space with punchy hues, elaborate patterns, and cost-saving details that quickly turned the cookie-cutter flat into a welcoming home where the two friends could both host dinner parties and hang out together in the evenings. She faked the high-end look with a few clever tricks:

For the living room, Burch had one big request: no TV hung on the wall. The space was on the small side, so Barlow naturally gravitated to built-in shelves made from engineered wood—with a twist. “Adding in tongue and groove paneling at the back of your bookcase is really simple and inexpensive to do, but it adds a level of detail that makes them look more expensive,” explains the designer. She finished off the lower doors with brass grill inserts and pulls sourced on Etsy. To create an intimate feel that still felt fresh, she coated the walls, units, and ceiling in Farrow & Ball’s Arsenic.

“We added curtains everywhere,” says the designer. “I believe that they go a long way in making a house feel homey and luxurious.” Instead of splurging on expensive fabrics, she opted for affordable linen and lined it with bright velvet trim: burnt orange in the living room, golden yellow in Burch’s master, and neon pink in Hannah’s bedroom.

In both bedrooms, Barlow replaced the builder-grade bifold closet doors with elegant custom ones (again using painted engineered wood and inexpensive Etsy hardware). But in Hannah’s space, which had neutral white walls instead of rich floral wallpaper like in the master, she used a tried-and-true hack to give the doors character. “We applied paper-backed fabric in the panels in order to elevate the basic joinery and add a textural softness, which is important for a bedroom,” explains Barlow. To match the pale blue curtains, she opted for cornflower-hued linen from Arte.

Barlow may have pulled a few traditional decorating strategies from her book, but with pops of neon pink and vivid teal walls, the two-bedroom flat feels decidedly innovative.