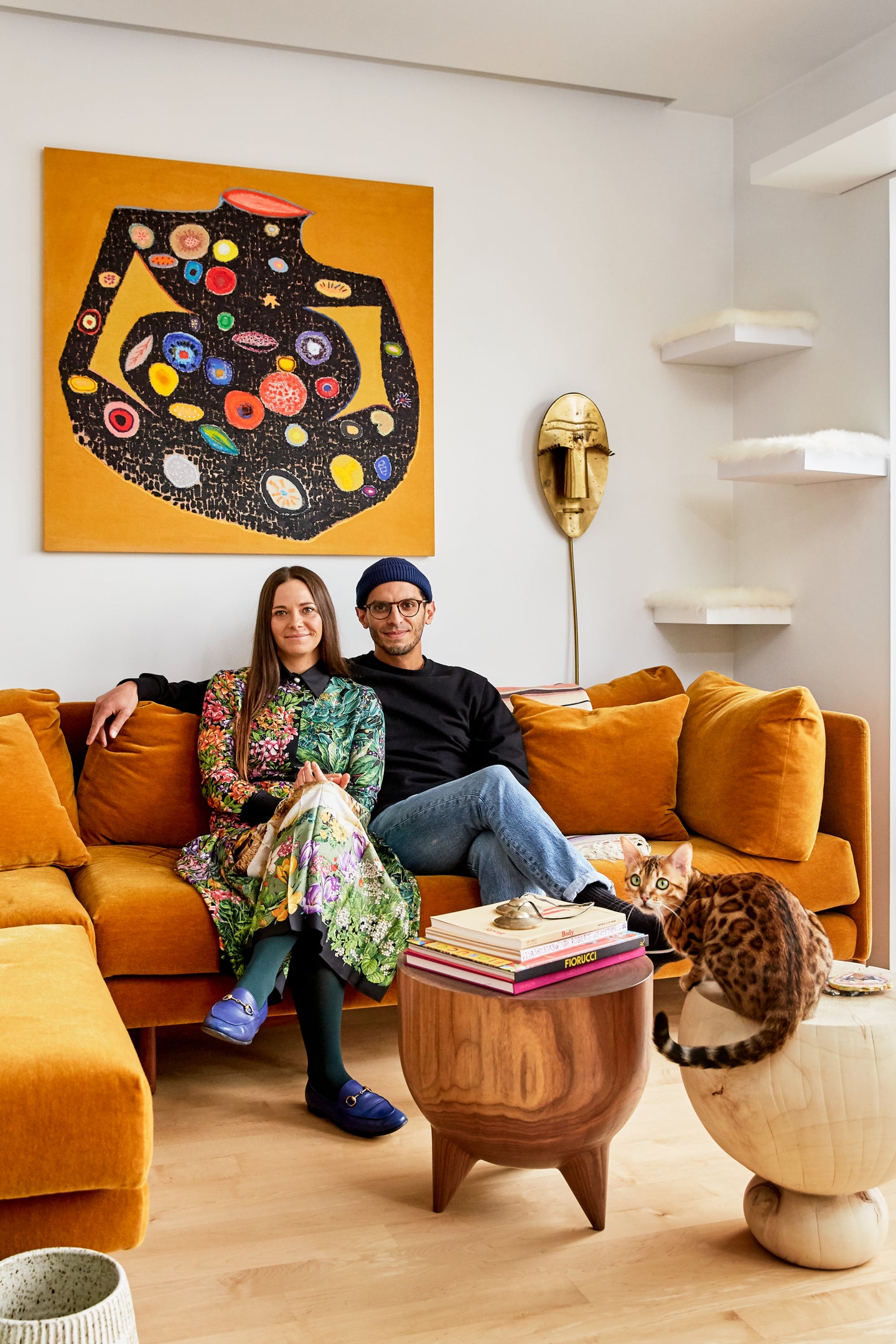 Wherever you imagined the founder of one of New York’s coolest jewelry brands to reside, it probably looks a lot like like this.

Caitlin Mociun, founder of fine jewelry and home goods company Mociun, lives in this 917-square-foot Brooklyn condo with her husband, Tammer Hijazi. The creative couple—Hijazi is a cofounder of design firm Bower Studio—took a remarkably casual approach to decorating. Mociun bought the apartment in 2015, moved in a year later, and only acquired a bed frame six months ago. And while she did extensive renovations to streamline the home’s backdrop, she didn’t have a particular strategy when it came to decorating. Instead, she took her time to fill it with sentimental items and playful tchotchkes, creating an urban museum of sorts in a way that only someone with a natural eye for design can.

“I actually cried when I went back to the apartment after I bought it because it was so ugly! I was like, oh my God, what have I done,” remembers Mociun of the pre-renovation space. After ripping out the ceiling, doors, floors, and part of the kitchen, she got the apartment to a breezier-feeling place, so she could begin layering in cool accents. The result is a vibrant space, full of unexpected and personal touches, that echoes the creativity of Mociun and Hijazi’s colorful wedding in the south of Italy.

The crowning jewel? A burnt orange velvet sofa—Mociun spent two years looking for it, using benches from the roof deck and a carpet as a makeshift seating area in the meantime. She now considers it her favorite part of the eclectic apartment. We spoke to the designer to learn more about how she infused her signature style into 900 square feet.

Consider, for example, the sofa. Rather than rushing to pick a seating option that could serve as a placeholder, Mociun spent time searching for the right piece to fit the apartment. “We wanted a comfortable couch; we didn’t just want to get a super-skinny mid-century one that looks nice but no one actually wants to sit on,” she explains. Following this laid-back approach, the space came together organically. It even made for a few twists: “I usually steer clear of color in things like furniture or walls, so the couch was a little bit of a surprise,” says Mociun. Suffice to say, it worked out.

Start with a focal point

One of the most striking features of Mociun’s space is the gorgeous terrazzo countertops in the kitchen. While the rest of the space came together naturally, she says she knew right off the bat that she wanted to include a particular Max Lamb marble, having this initial jumping-off point allowed the decorating scheme to follow organically. “I knew when I was doing the kitchen that I wanted it,” she says of the stone. “The whole kitchen was designed around that countertop. Even though it’s colorful, it’s all muted, so it doesn’t feel too loud.” Flanked by light wood accents and white cabinets, it’s just the right amount of color to add an edge to the space.

Mociun and Hijazi usually take two big trips a year—most recently to Italy and the Greek island of Naxos—where they bring back an assortment of ceramics. While the recommendation to use travel to source unique home goods is hardly unique, Mociun’s spin on it definitely is: She turns to places like hardware stores and museum gift shops to find decor. “To find really amazing things, you have to go to a shitty store in a weird place. I got a cool coffee grinder in a hardware store in Greece, which we don’t even use but is really beautiful,” she says. She also recommends hitting up a local museum shop or even a craft fair. “Usually, 99 percent of the stuff is horrible, but then you’ll find one really great thing. Go to junk shops. Go to thrift stores,” recommends the designer.

If that fails, head to eBay

The key to using eBay is knowing how to search. “You can’t go on eBay and type in ‘ceramic bowl,’” offers Mociun. “Try ‘Japanese earthenware ceramics,’ and from there, you’ll find a company you like, and then refine by that.” She cops to spending hours hunting in what she calls “the biggest thrift store ever,” but says it’s worth it when you unearth a hidden gem, which, given the nature of a site like eBay, is likely to be fairly inexpensive.

Paint is the answer to small-space woes

Mociun did some pretty extensive renovations to her smaller space before fully moving in, including installing floor-to-ceiling doors that draw the eye up and bleached maple hardwood floors that lighten the apartment. While she acquiesces that these are not the most renter-friendly fixes for a small space, there is one foolproof trick she used that is: white paint. Specifically, Benjamin Moore’s Regal Classic Matte Finish White N2210. “Make sure it’s not an off-white,” she cautions. “Choose a bright, cooler white that doesn’t have any yellow in it. The way the light bounces off it makes it feel more expansive.”

See more homes we love: The Cheeky Wallpaper in This Portland Home Will Make You Look Twice This Bright and Happy Manhattan Beach Home Has Accent Walls Down Pat A Historic 1800s Texas Home Gets a Second Life as a Chic B&B