The Finishing Touch in This DIY Nursery: Hand-Drawn Wallpaper on the Ceiling

One of the many custom-on-a-budget details. 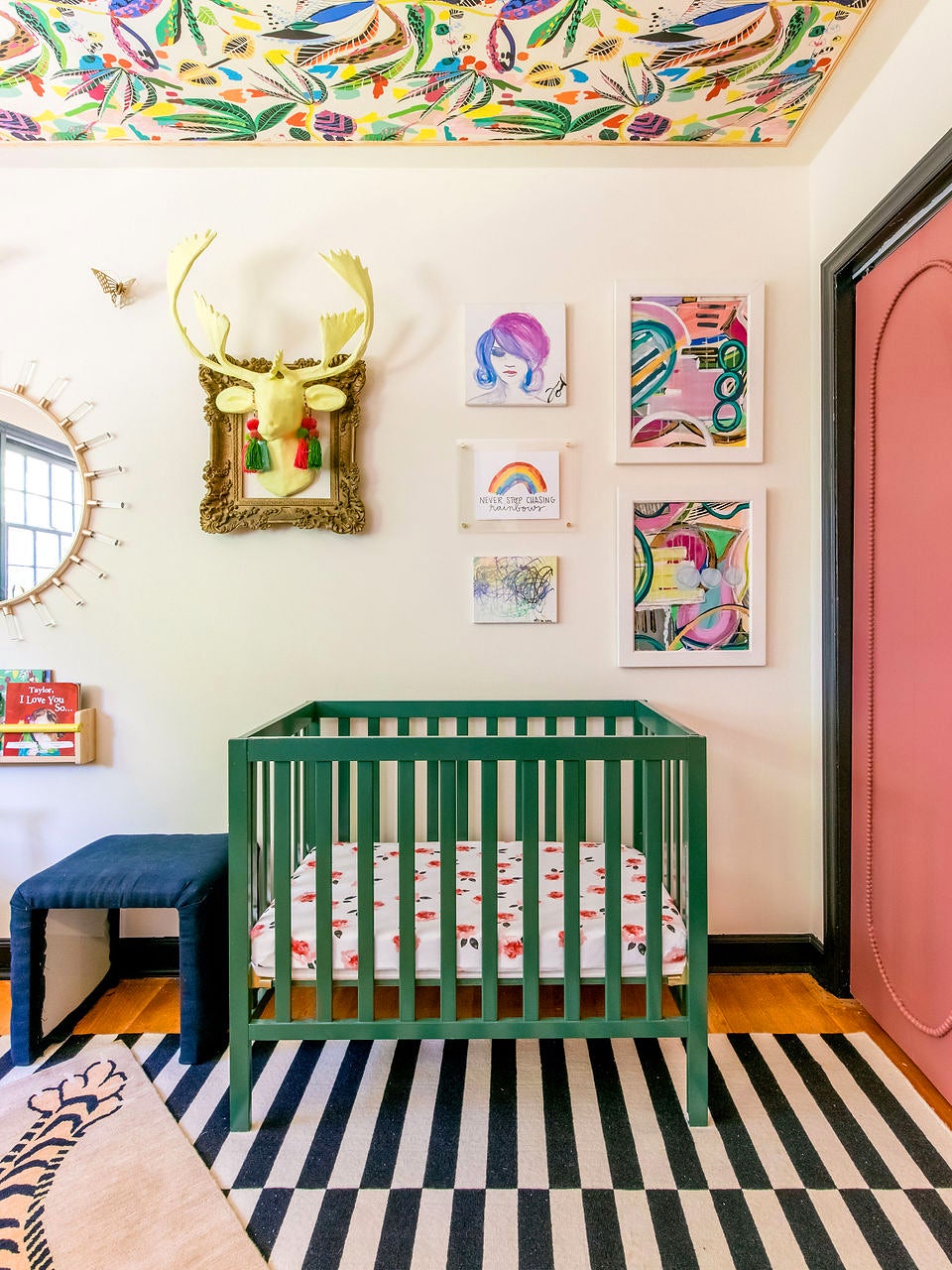 Danielle McKim returned home one day to a giant stuffed giraffe sitting on her front porch. “There was no note, so I had to text my mother to figure out where it came from,” says the Charlotte, North Carolina–based mom of two, who finally discovered a family friend had left it there for her newborn. It was an unexpected surprise, but one that kicked off an animal-themed nursery for McKim’s now 1-year-old daughter, Andi.

It arrived at just the right time, too: McKim and her husband were moving to a new house across town—a split-level bungalow that could accommodate their growing family. “The kids shared a room before, so it was very exciting for Andi to have her own space,” she says. Determined to reuse as much existing furniture as possible, McKim set out to create a spirited room her daughter could grow into (and did it all on a $1,000 budget).

Thrifting the Bulk of the Furniture

McKim already had practical items, like a forest green mini crib (which she purchased on Amazon) and whimsical decorative accents such as a neon yellow moose bust. “The moment I began pulling all this stuff out, I started getting giddy, because it all worked together,” she says.

McKim sourced the rest of the furniture on Facebook Marketplace or in thrift shops: a $150 vintage dresser, a 45-square-foot chalkboard that still had high school math on it (which she scored for $25), and a $50 vintage chair she had reupholstered in a yellow cheetah fabric. “I was scrolling online one night and I saw the print and knew this was it,” she remembers. She had it shipped directly to her upholsterer and only got to see it in person on the finished product. Her biggest splurge: a $450 tiger rug.

Tying It All Together

Because she was mixing colors and patterns with abandon, McKim needed a throughline to give the space a cohesive theme. The solution came in the form of a bright, hand-drawn wilderness-themed wallpaper. “As soon as I saw it, I ordered a double-roll set,” she says.

She didn’t want the print to compete with the art on the walls, so she considered papering the lower half and adding a border, but she eventually landed on the ceiling as the application spot of choice. “I stenciled my son’s nursery ceiling in our last home, so I wanted Andi to also have something interesting to look at when she’s in her crib,” she says. The install wasn’t as simple, however: “It was just peeling right off,” remembers McKim, who had to give the ceiling a couple of coats of primer to get it to adhere.

McKim turned to Pinterest when it came time to overhaul her daughter’s closet. “I saw an image with doors that had wood bead detailing,” she says. Using standard $80 bifold doors from Home Depot and a glue gun, she applied each bead individually in a rounded border pattern, something that took about two days to complete, and painted them hot pink. “Once I got that done, I was looking inside the closet at a blank wall, so I went back to Pinterest,” remembers McKim, who used the same color as the doors to paint a cloudlike pattern on the inside walls.

Flexing her DIY skills once again, McKim turned to the windows. Instead of ordering custom curtains, she picked up a set of white panels from IKEA and attached pom-pom trim from Hobby Lobby. “It was so simple,” she says. “If you know how to iron, you can do this on your own.” The drapes now serve as the perfect whimsical backdrop for the giraffe that kicked it all off.