This Eclectic Loft Is the Epitome of Brooklyn Cool

See how one family brings together storied treasures in their bright and airy home. 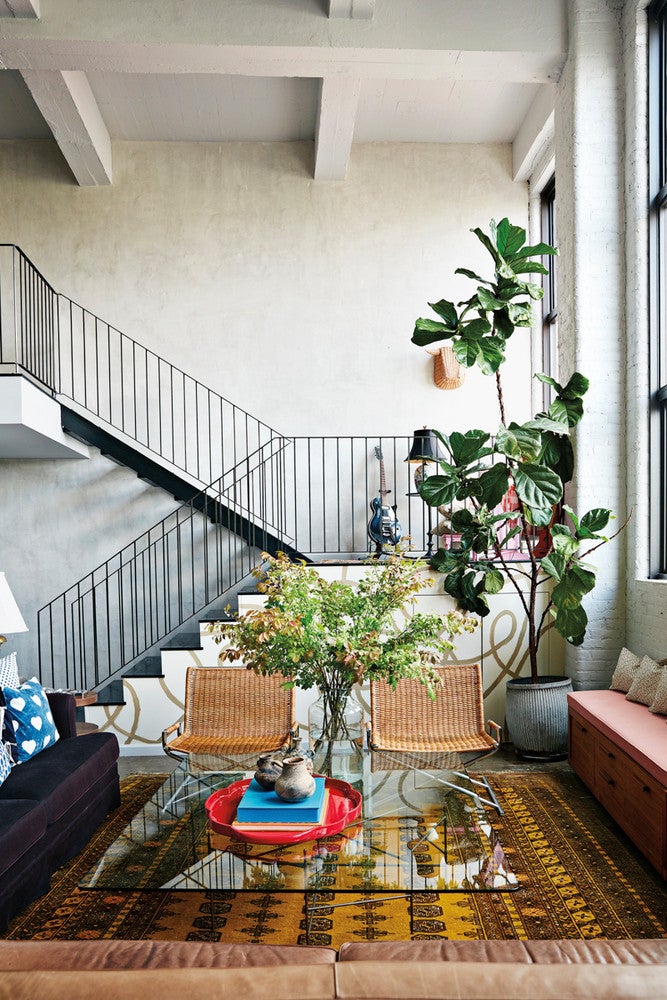 For Gillian Schwartz, the act of collecting has become an art form. After illustrious runs at Kate Spade and Bumble and Bumble as creative lead, Schwartz now brings her whimsical aesthetic as a brand consultant for big-name fashion companies like H&M and Steven Alan, and properties such as the Jane Hotel and Lafayette House.

Storytelling is at the heart of each project she touches—and like her work, Schwartz’s loft in Williamsburg, Brooklyn, is filled with cool, curated moments.

The third-floor apartment has undergone several transformations since Schwartz purchased it in 2004: first as a single lady’s lair, then as a home for two following her return from Los Angeles, where she met now-husband Gordon Harrison Hull, an artist and cofounder of creative studio Surface to Air. Embracing minimalism, the couple highlighted the bones of the space.

“When we moved in, we edited my collection and kind of started over,” says Schwartz. With the arrival of son Guy three years ago (and a daughter on the way), they added glass-walled bedrooms upstairs.

“I read somewhere that 99 percent of marriage is yelling ‘What?’ from different rooms,” Schwartz jokes, “but we didn’t want to lose the light or the openness of the loft. The windows with clerestory were the best solution.”

The home has become the ultimate testing ground for new ideas. “I think the time I spent in the loft years before we merged, and the patterns that developed living together, have made it possible to completely max out the space,” says Schwartz.

“In a loft, everything needs to gel together since each area is visible simultaneously,” explains Schwartz. To ground and unify the space, the couple painted the floors black and the walls white—to much debate. “Many said it was blasphemy to paint the raw brick,” says Schwartz.

But ultimately the calming base brings the focus to splashes of color like the bright yellow rug, red gingham daybed, and indigo pillows. Similarly, glossy white

Up Your Shelfie Game

Elevate your library zone beyond just being a place to store books, and think of it as the new

Curating the mix comes with fierce editing—what to keep and when to know something has reached its expiration date. Schwartz removed items from the space and only brought back what she actually missed (a technique picked up from friend jewelry designer Sophie Buhai). Avid art collectors, Schwartz and Hull highlighted a pair of matching Prinkshop prints by friend Pamela Bell to “ground the busyness” of an otherwise eclectic wall.

“We noticed stories and sentiments behind our things grew stronger if they were part of a larger collection,” says Schwartz of the thoughtfully curated vignettes scattered throughout the loft. Wood cutting boards were picked up on trips to France, Spain, California, and England; sculptural vessels lining the dining room credenza are a John Derian find; small silver boxes come from various flea market scores in Mexico.

Grouping items not only has serious impact but also helps streamline what you bring home and narrows your focus while shopping. As Schwartz says, “In an overwhelming Marrakech marketplace, it’s been nice to have a few targets to hit.” Spoken like a true collector.

This story originally appeared in the Winter 2017 issue with the headline A Loft Story.