Spooky doesn’t have to be seasonal. 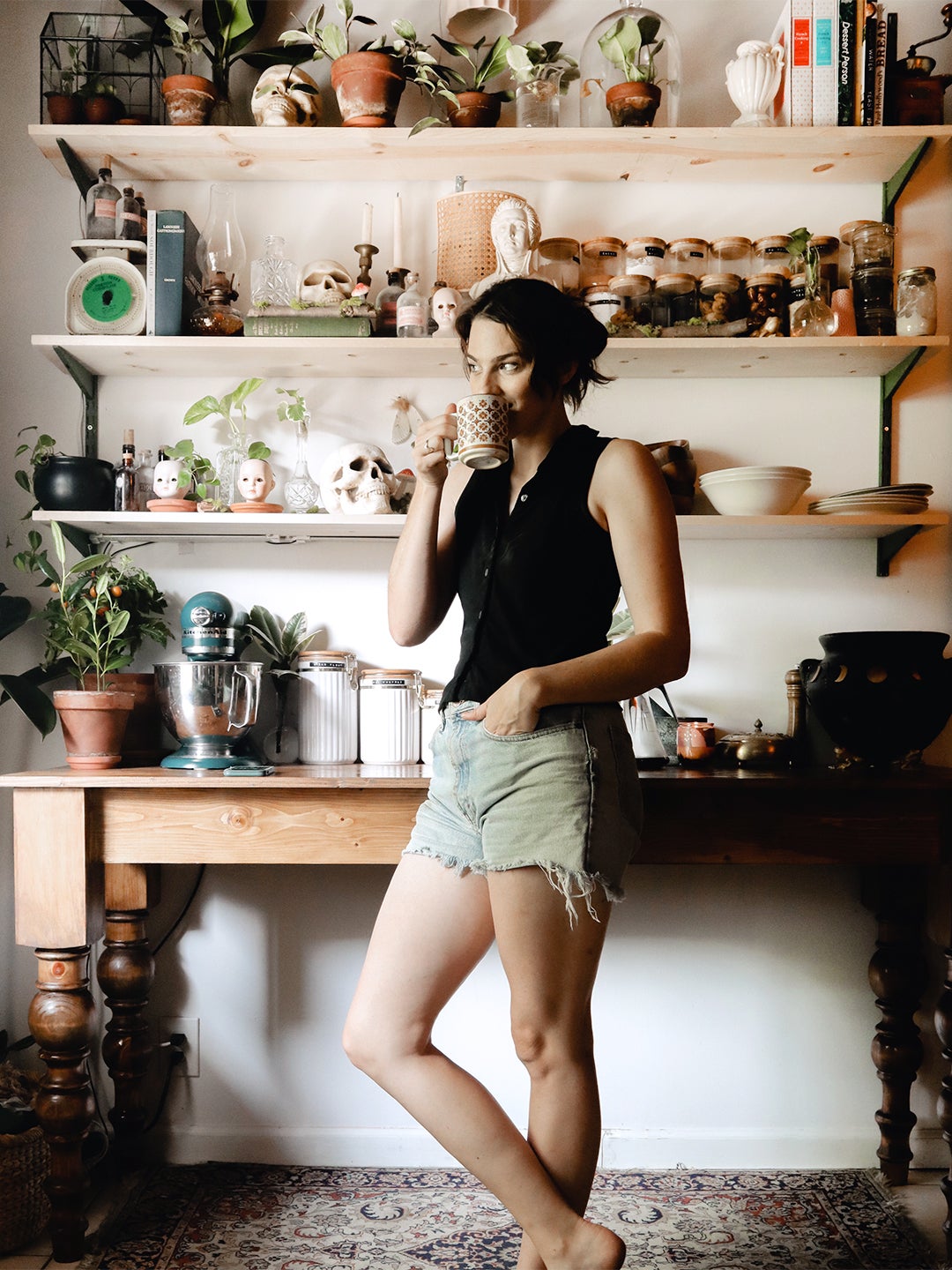 All Photography Courtesy of Brooke Darwin.

October 31 can’t come soon enough for creative Brooke Darwin, who way before the temperatures began to dip or the leaves started to shift from green to gold, took to crafting Halloween decorations—we’re talking two whole months early. As a horror buff, you might be surprised to learn that Darwin’s inspiration for getting into the spooky spirit wasn’t a murder mystery or an exorcism film, but Practical Magic, the ’90s rom-com starring Sandra Bullock and Nicole Kidman. She skipped the ghoul string lights and Ouija boards and has been collecting vintage vases and working on an antique table since July to transform her tiny Los Angeles rental kitchen into the witchy, herbal conservatory from the movie.

“My kitchen has been my creative space,” says Darwin. During quarantine in 2020, she found herself tackling all sorts of DIYs to pass the time. “I have painted my kitchen so many times. I’ve put up shelves and taken them down,” she recalls. She has also tried nearly every TikTok trend, from wall art arches to potter pendant lights. But it was her Halloween creations—doll heads turned into planters, kombucha transformed into “poison bottles” (she mixed charcoal and bentonite clay to create that dusty effect, holding all of it together with hair spray)—that not only brought her the most joy but helped her realize her true style.

“I like to call it Swiss Family Robinson,” she says, laughing, listing an earthy palette (hello, hunter green), along with wood and dark stone details as her go-tos. A pink accent wall? Not Darwin’s vibe. But a farmhouse apothecary table with handcrafted wood legs by Carolina Leg Co.? She plans to keep that DIY out all year long.

To complete her Sally Owens fantasy, Darwin has decorated her shelves with all sorts of spooky-chic finds, including old glass decanters to propagate her plants, skulls, Victorian-era busts, and a $15 planter from Lowe’s that’s now a black cauldron held up by gold frogs she sculpted herself out of modeling clay. Next she plans to add moss, mushrooms, and branches for more greenery, and give a busted wall clock a second life as a moon phase calendar.

Mass-produced, themed decorations are part of the reason why Halloween gets a bad reputation for being garish and tacky. But Darwin’s just-eerie-enough DIYs prove you don’t have to turn your whole place into a haunted house to celebrate. Here, she shares her latest: vellum-made moths.

Darwin booted up Photoshop (but notes any editing software will do) to remove the background from a digital photograph of a white gypsy moth—though any creepy-crawly is fine. “Adjust to the size you’d like, then copy and paste as many moths as you can fit on one sheet of paper,” explains Darwin. She proceeded to print two versions—one standard and one mirror image of it—on vellum paper.

After using a glue stick to paste the wrong sides together (Darwin explains this will give a lifelike effect from every angle), she cut out each wing and folded the cutouts for added dimension.

Step 3: Get Creative With Texture

“I added a bit of thick pipe cleaner—about ½-inch wide—for the head of the moth,” says Darwin. “I originally had thin ones that I attempted to taper with scissors, before I found these perfectly fluffy ones. They have four thick sections, so you can just cut it right in the center, then fold it where it tapes in, and you’ll have two sets of antenna.”

With a finishing touch—giving each antenna a gentle bend outward—Darwin rolled up masking tape (double-sided tape works just as well) and placed the insects “anywhere a moth might land.” Think: on the windowsill or your pantry items. In total, she suspects the project cost less than $10 if you exclude the printer and ink, as well as the tools she already had on hand, like the hot-glue gun.