See who came out on top, in our celeb cook-off! 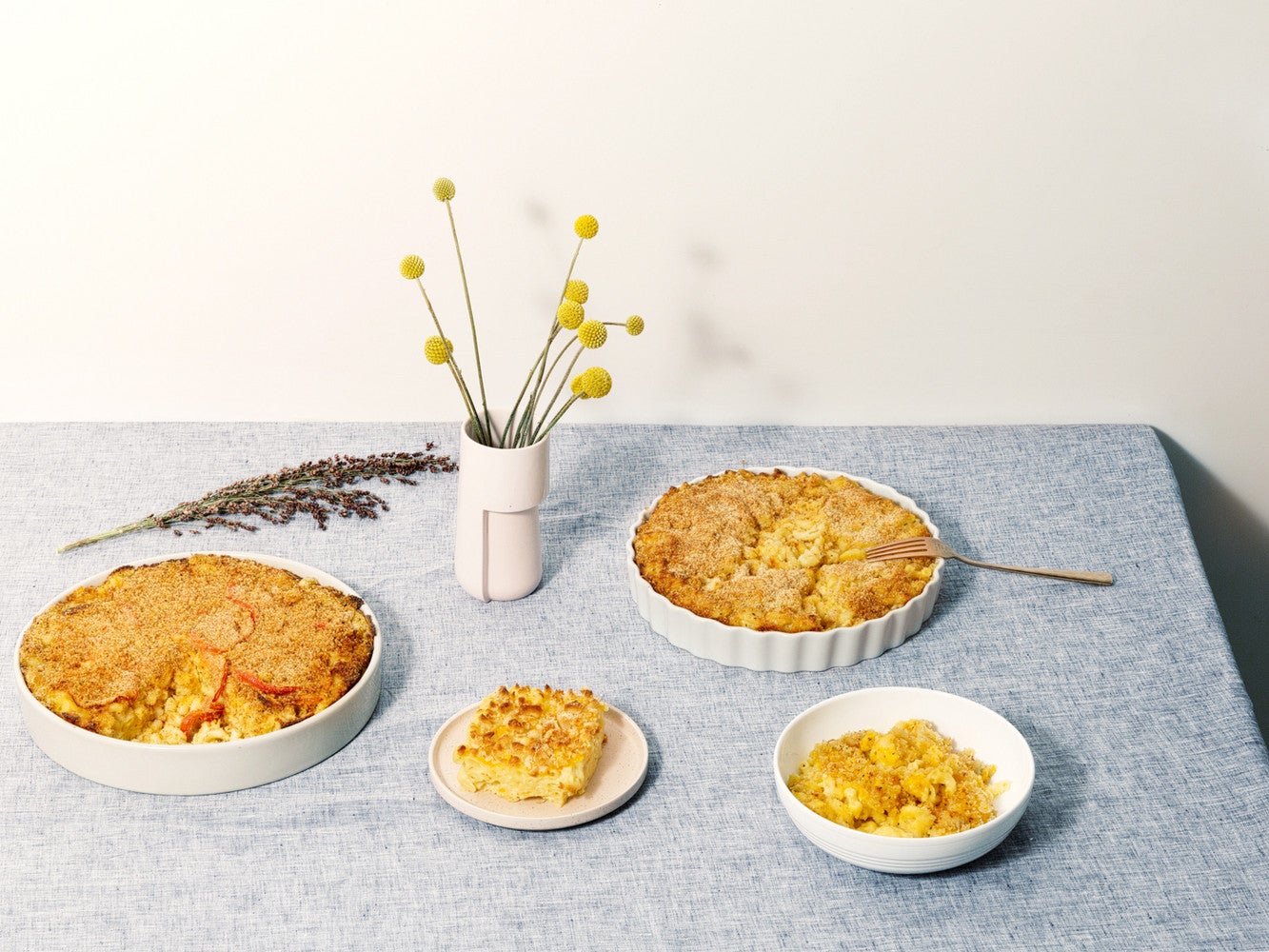 Here at Domino, we take our comfort food *pretty* seriously, especially when the cold weather hits. Say what you will but, there is nothing quite like indulging in a heaping bowl of whatever said comfort food may be, burrowed under a pile of blankets, binging on whichever Netflix drama happens to be the flavor of that week. While the list of dishes can vary from person to person, there is arguably one culinary staple that stands in as the quintessence of comfort food: mac and cheese.

Despite the plethora of variations on the classic recipe, the foundation typically remains the same: Elbow noodles, a dangerously bold combo of cheeses—the more variety of cheeses, the better (if you ask us)—a healthy dose of butter (and then some more butter), and last but certainly not least, a breadcrumb topping that seals the deal. But what is it specifically that sets one recipe apart from another? Is it the type of cheese? The spices used? Or is it the cooking time or style? When it comes to the nitty gritty, the smallest of details can really make a difference—as so we discovered when we put a handful of them to the test, in order to discover who has the best mac and cheese recipe.

Full disclosure: we were not, by any means, able to recreate even close to the number of recipes necessary to determine whose mac and cheese would come out on top. While such a feat would be a brave (and undeniably decadent taste-testing) experience, we had to come up with a more realistic approach for the experiment. And for as dedicated as we are to making the ultimate bowl of macaroni and cheese, we turned to the professionals, to uncover the one recipe that beats them all. So we turned to the creme de la creme to help us do so. We’re talking about the celebrity chefs who could hold their own in the kitchen, the authorities with culinary distinction: Martha Stewart and Ina Garten, we’re looking at you. And because we wanted to make things interesting, we threw in a few celeb foodie-turned-chefs into the mix.

In true cook-off fashion, we put up the recipes of our four competitors against one another, to see whose take on a classic mac and cheese would come up on top. The result—post an office-wide taste test—was pretty surprising but, we won’t get ahead of ourselves.

Here’s what happened when we made each of their recipes…

Ina. Ina. Ina. Is there anything she can’t make? Garten’s take on macaroni and cheese is a simple one: a mixture of Gruyere and sharp cheddar makeup the indulgent filling, while nutmeg and a tomato topping lend a unique spin. Personally, I have a thing against add-ons in recipes, which don’t quite belong. In this case, I’m talking about the tomatoes. Nothing against Ina (She.Is.Everything) but, macaroni and cheese is so deliciously perfect, the basic ingredients are enough as is. Here, the dish is topped with fresh white bread crumbs—though looking back, I would opt for a more crusty variety, to give the mac and cheese an added crunch.

What we do differently: Less nutmeg, more salt.

Martha’s “easy-to-make” version was, like Ina’s, a relatively straight-forward recipe. In fact, the two were nearly identical, with only a handful of adaptations. The result was, nonetheless, delicious though it did slightly resemble a casserole once fully baked. A pinch of cayenne pepper gave the dish a spicy kick while the cheesy-breadcrumb topping provided an element of crunch. It should be noted that our taste-testers were generally more enthusiastic towards Stewart’s rendition of macaroni and cheese.

What we do differently: Add more breadcrumbs!

It should come as no surprise that wellness guru Gwyneth Paltrow’s take on the classic features one or two healthy modifications. That being said, we weren’t all that surprised to learn of the addition of cauliflower in the recipe—however, being it was merely a small head of cauliflower, it was nearly impossible to taste. One may ask why even bother adding it in, in the first place? Paltrow’s recipe was by far the most modified: it features the addition of garlic, thyme, cayenne pepper, and Parmesan cheese. It also calls for half the typical amount of butter while the Panko and cheese topping was to be mixed with olive oil and salt.

What we do differently: Add more garlic to really bring the flavor out. Ditch the cauliflower and add more butter. Yes, yes, we know this makes it slightly less healthy, but if you’re already going for it, then just go for it.

Who could see this one coming? Chrissy Teigen’s recipe was by far the top favorite. It won by a landslide, and all thanks to the garlic bread topping. To be fair, it is hard to rival—garlic is a such a powerful ingredient, it instantly changes everything. Another major game-changer? The addition of American cheese (16 slices to be exact) on top of the Gruyere and cheddar combo, which helped usher this recipe to the top. Featuring a slightly less cooking time, the overall dish came out irresistibly gooey and hearty.

What we do differently: Nothing.

Do you have a mac and cheese recipe that can rival these? Sound off in the comments below!