They’re spending a year traveling around the world. 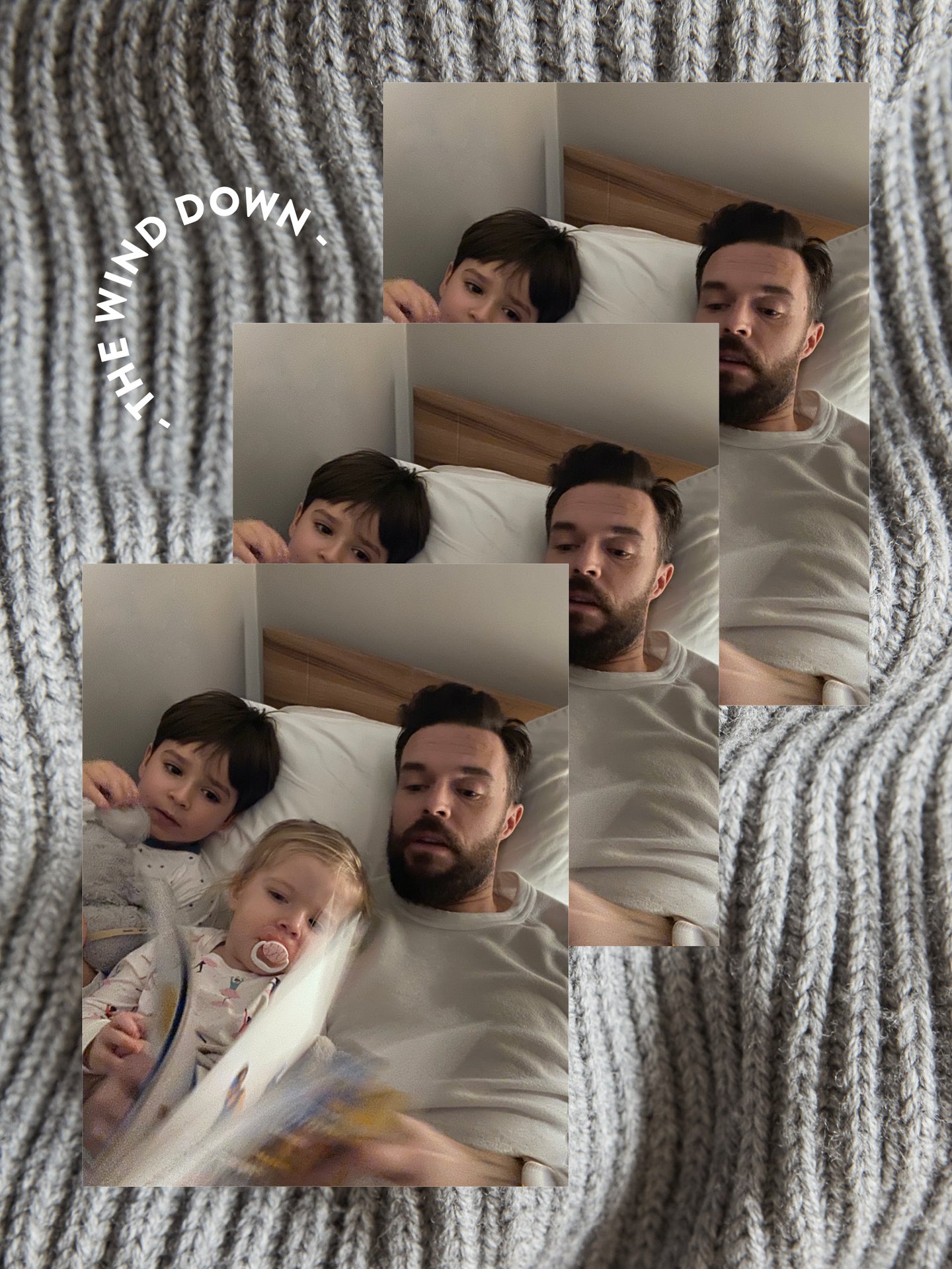 We spend a third of our lives asleep—that means our bedroom is the most lived-in space in our homes. It’s the room where we start and end our days, and that’s why the rituals that happen there are extra-important. In The Wind Down, we’ll be exploring the nighttime routines of people we admire and taking their advice to make the moments just before bed feel our best—even when we’re on the go.

“We haven’t stayed in one place for very long—three weeks has been our maximum,” says New York–based Northern Irish artist Oliver Jeffers of traversing the world on a yearlong trip with his family of four—wife Suzanne, 4-year-old son Harland, and 2-year-old daughter Mari. “Our nighttime routine is the one thing we try to keep the same in our kids’ day-to-day.”

Before departing on the ambitious journey, the couple locked in a few key destinations—Dubai in February, where Jeffers will speak at the 2020 Emirates Literature Festival, and flying to Tokyo from there—but generally, they’re approaching the trip with flexibility and an open mind, often planning the following day’s itinerary after the kids have fallen asleep. Of course, maintaining some stability is key when trying to get two little ones to nod off in new and unfamiliar locations. Here, Jeffers shares the tips and tricks the family has picked up on the road, and how they get quality shut-eye no matter where they end up for the night.

Playtime: The most important piece of luggage for my daughter is her pack-and-play, because that’s something that can stay consistent, no matter where we are. She has a tea set that she’ll bring out; she likes to arrange it all. Our son has a travel bucket of Legos—the classic bricks with some Star Wars Legos thrown in. That has definitely been a saving grace at dinner.

Soft comforts: Both kids have their stuffed animals. Mari has a little lamb on a blanket that she calls Doggie (for reasons unknown to anyone), and Harland has a stuffed elephant that he calls Eli J. (short for Elephant Jeffers), which has been lost and returned on more occasions than we would like to admit. To launch our trip, we took a ship from New York to England, and on the last night Eli J. disappeared. But two weeks later, somebody found him—he’d gone to Norway and back on his own—and we picked him up from another place the ship docked.

Family dinner: We’ve started bringing a small bottle of good olive oil and good salt because that’s not always a guarantee in an Airbnb. You can make a very simple dish better with those two ingredients. We’ve been traveling along coastal areas, so we’ll go to a fishmonger and to the farmers’ market to stock up on fruit, vegetables, eggs, and milk. It’s a big ask for our kids to always behave well in restaurants, so we try to eat in when we can.

Cleanup: Bath time helps the kids relax. Then we brush their hair, put on their pajamas, and brush their teeth.

Instant ambience: Sometimes it’s we four all staying in the same room. We have a white noise machine that we set to a calming waterfall effect and a lamp that can either be folded out into a lantern or used as a cozy night-light. It doesn’t take up an awful lot of space, but it allows us to read a book together.

Story time: We only brought five books because we have half a suitcase each. At a certain point we were in the Netherlands and there was an English-speaking bookshop, so we switched out our books. Sometimes the places we go have books, but in other languages, so we’re making up stories as we go along. Then we sing—we have four or five songs in rotation. My wife and I will do that until the kids have really fallen asleep. And usually by that point, we’ll be asleep, too—half because we’re tired from a day of traveling and half because we’re usually all in the same room.

Peace and quiet: But if bedtime is early, we’ll back out of the room—the slightest bit of noise wakes the kids up—and open a bottle of wine and watch a show on our Apple TV, which we bring everywhere with us.

Plan to be flexible: More often than not, we get out our computers and do work or research where we’re going next and book our travel. At the start it was a little disconcerting to not always know where we were headed—I remember we were in some remote Greek islands and it was beautiful, but it was at the end of the peak season, so a lot of the restaurants were closed and the food was quite salty, so our kids weren’t digging it that much. We realized that we were looking for Italian restaurants in Greece to feed our children, so I was like, Well, let’s just go to the source. We went to Italy, which hadn’t even been on our list.

Required reading: I might pull out a book or read the headlines of the day. For fiction, I normally have a paperback copy that I pick up in an airport somewhere and then leave in a place once I finish it. The nonfiction titles I read tend to be longer and I get them on my iPad. I just finished The Body: A Guide for Occupants by Bill Bryson, which I thoroughly enjoyed.

Perfect pj’s: I have a pair of cashmere sweatpants that double as pajamas, and I’ll crawl into those at night, paired with a light, worn gray sweatshirt.

Long haul: On airplanes, it’s all about getting the kids comfortable. We try very hard to get them to sleep. Although on longer flights I regret not filming a time-lapse because they move around like jumping beans! So they have iPads, which they don’t have that much the rest of the time…

Sleep aids: I had very bad insomnia a couple of years ago and still have a couple of leftover sleeping pills. Honestly, just knowing that I have them is enough to help me sleep. Since we started traveling, I’ve not needed them. I also bring earplugs and put them in just one ear, so if there’s a little noise, it won’t wake me up, but if something goes wrong, I’ll hear it.