Blogger and stylist Annette Vartanian shows off her passion for thrifting and preservation in her midcentury modern Pasadena ranch. 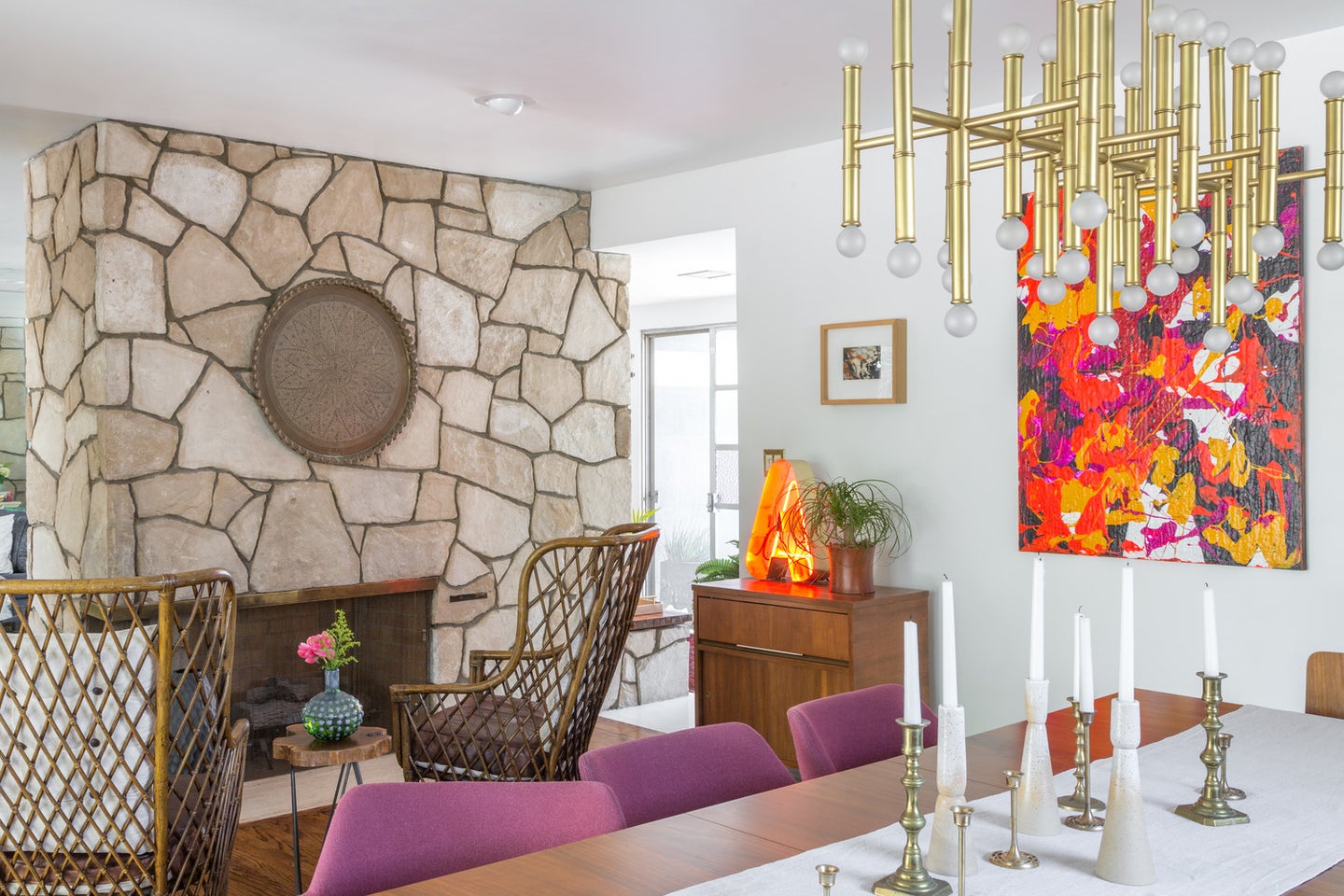 Some people order a double espresso when they need a pick-me-up. Annette Vartanian heads to the thrift store.

The digital marketing strategist confesses her favorite tonic is browsing midcentury, one-of-a-kind gems for her home and closet. Since 2013, she’s been sharing her thrift store adventures and offering tips for styling vintage pieces on her blog, A Vintage Splendor. To our delight, she welcomed us through the sliding glass doors of the freshly renovated home she shares with her husband, Alan Loomis, and their toddler, Harlee.

The thrill of decorating with furniture from a bygone era is that it’s “always unique—nobody else is going to have it,” Vartanian explains. It can be practical, too. “The craftsmanship is just unparalleled. You wouldn’t be able to find something like that anymore today.”

Four years ago, when she and Loomis purchased their 1959 ranch in Pasadena, California, it was far from turnkey. With guidance from architecture firm Gabor + Allen, they tackled daunting problems such as rotten siding, ugly security bars on the entry points, and a landscape so wild that “Alan found a car fender in the front planter,” she says.

In the entryway, they upgraded the linoleum tile to white quartz flooring that resembles terrazzo, then replaced the disintegrating wallpaper with rolls of Crystalline by Drop It Modern, whose marbled pattern flows smoothly into the Palo Verde stone wall and planter.

The couple liked the original stone planter but decided a flat surface near the front door would be more practical. “When we come home at the end of the day, I just want to throw my bag down,” Vartanian says. Loomis created a bench out of Douglas fir 2x2s, and set it on top of the planter like a lid—a DIY project Vartanian shares on her blog.

That clever solution is typical of the couple’s preserve-what-you-can renovation style. “We didn’t remove the stone planter even though we could have had a larger entryway. We wanted to update it but stay true to the home’s aesthetic,” Vartanian says.

In the kitchen, they fought to save the original custom cabinetry, but their carpenter flagged mildew and black mold. They opted for Ikea cabinet bases fitted with custom walnut fronts by Semihandmade, but they did re-install the old cabinets’ brushed nickel pulls, which match all the doorknobs in the home.

Their most impactful change was opening up the wall separating the kitchen and dining room. “If I’m entertaining, I want to have a counter space where I can put food. Or if I’m cooking and people are in the dining room, I want to be able to have a conversation with them,” Vartanian says.

The dining room—with its Jonathan Adler chandelier, West Elm table, and vintage Eero Saarinen Executive Arm Chairs in original plum wool—is now the heart of the home whether the couple has company or not. “While one of us is cooking, the other is in the dining room catching up on emails or feeding Harlee,” she says.

In the living room, Vartanian’s most prized find is a pair of 1960s teak and floral chairs that would look just right on the set of Laugh-In. “I love the original vinyl with the bright blue and green,” she says. To keep things balanced for Loomis, who prefers minimalism, she chose an indigo sofa from Crate & Barrel and accessories in natural materials such as jute and porcelain.

To Vartanian’s joy, the previous owners left the bamboo-style credenza in the living room. “Probably the reason they didn’t take it is it weighed hundreds of pounds,” she says. It contained a broken stereo system, which the couple removed and replaced with shelving for books and toys.

The framed maps are an ode to Loomis’s job as an urban designer. They also remind the couple of their trips to Berlin, Prague, and other destinations before they started a family. “We would go into vintage bookstores and try to find a vintage map of the city we were visiting,” Vartanian says.

The glamorous guest bathroom around the corner is inspired by another city: Miami. “I wanted to do some sort of a palm wallpaper, kind of like [an homage] to Golden Girls. I love Blanche’s bedroom!” says Vartanian, who chose Anthropologie’s Fanned Fronds pattern.

The original pink sink was a perfect complement to the greenery, so she hunted down a matching toilet on craigslist. “I wanted to keep the pink fixtures; they’re part of the character of the house,” she says. And besides, “It’s a guest bath, so it’s easy to be really loud and really fun with it.”

Pink carries over into the master bedroom’s linens, backed by dramatically dark Hale Navy paint by Benjamin Moore and two vintage prints picked up in Palm Springs. “Everybody thinks in a small space you have to go with light. We went with this dark blue, but just on that one wall. Everything else is simple white. I think it creates a sense of calm in our bedroom,” she says.

Although Vartanian and Loomis have just set down their hammers, they’re already planning a new master suite upstairs, a terraced vegetable garden, and an improved deck. “Home ownership is never ending,” she says with a laugh.